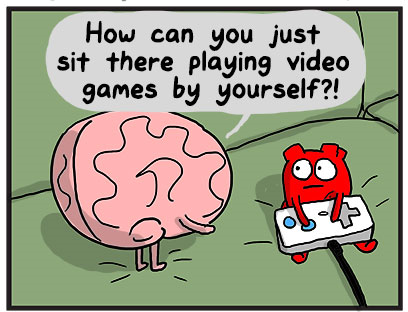 “What did you do this weekend?” From my experience, when a person asks you this

question it is never because they are interested in what you have to say. It is always 100% because they want to tell you, anyone, what they did. I have even skipped disclosing any of my own information and answering their question with the very same question they have just asked me and not a single person to the day has pointed it out while proudly filling me (and anyone who will listen) in on their personal events.

So what did I do this weekend you ask? Let me tell ya… I bought my boyfriend my favorite game for him to play: God of War for PS4. He is still playing it while I type this. He is a giant heart and I am a giant brain so the awkward yeti comic reminds me of our relationship. [featured image]

From Redbox onDemand, I rented my mom the “Three Billboards Outside of Ebbing Missouri” movie because she was looking forward to watching it (I never heard of it) Thinking it might be lame, I watched it with her anyway for the bonding experience. It wasn’t until we were a few minutes in when she tells me this movie has won awards. That is totally a game changer. A lot of parts in the movie made me laugh and only one very serious part made me cry. I still can’t get the movie out of my head because it really was THAT memorable.

My daughter went to LGBTQ+ prom on Saturday with her best guy friend. She told me she had fun. Our small town had their prom the same night so I was able to get pictures of them dressed up with some of their friends dressed up. To me it feel like practice for her Junior Prom next year.

She told me tonight she signed up for World of Warcraft and hasn’t played it yet so I am in the process of downloading it myself. It is like two thirds of the way done. Free trial up to level 20. I have successfully avoided this game at all costs because of the “costs” associated with the game. Husbands and wives divorcing because the husband spends all their money on in game items. I know two guys who are grown adults probably on their 9th year playing in a row. Both are still married by the way.

8 days until the end of my school term and I am on the last chapter of my last class. If I keep at it I might finish all my reading tonight before settling in to watch Westworld Season 2 premier on HBO. I loved the first season so I am pretty sure I am going to love the new season.

You are absolutely right, most people want to be heard but not listen.  Listening well is a skill that takes practice.   I once had someone who would call me every night and I would just sit there and listen.  If she did ask how I was doing, which really was rare, I found that I did not want to answer so I wouldn’t.  I knew she wouldn’t listen.  One time I did answer and she said she was tired and needed to go to bed so goodbye.  Learned my lesson well.  I finally had to tell this person that I did not want to talk with her on the phone anymore.  She became quite upset with me but before long she latched onto someone else who would let her go on and on.  I’m glad you shared your day with us in your entry. You are very thoughtful to have bought your boyfriend a game and to have rented your Mom a movie.  Glad you were able to get some photos of your daughter and friends dressed up.  Those are special photos indeed.  I have a few photos of my daughter with her friends when she was in high school and they make me smile every time.  May I ask, what are you studying in school?

@wildrose_2 Out of all of my skills, my active listening is my favorite. I’ve perfected it over the years. I remember the first time I purposefully listened to someone for the sake of learning to listen and it felt very strange. I felt like a phony. But I am glad I started somewhere because now it is as natural as breathing and blinking.

I was a communication major back then and now I am a software development student. When thinking about my future, I realized robots are replacing humans in employment so I figured I would learn to program the robots of the future. I have a love of psychology and technology which puts me right in the heart of artificial intelligence. I am self taught just getting credentials like certifications and degrees to showcase my knowledge.

I notice in your diary you are avoiding diabetes with your diet. Me too. I also don’t eat soda, sugar, cake, carbs, pasta, bread, processed packaged anything.

Three Billboards was a great movie, I thoroughly enjoyed it.

World of Warcrack (I like that) is my favorite game. If you guys  open an alliance character in the Lightbringer Realm… I’ll hook you up with some gold and gear to help get you started.

I forgot Westworld was on tonight… thanks for the reminder!

@peter_24601 I fell asleep right away and missed what happened in Westworld. I will give it another go tonight =)

Thank you so much for the help invite into the Lightbringer Realm… I can’t wait to get started.