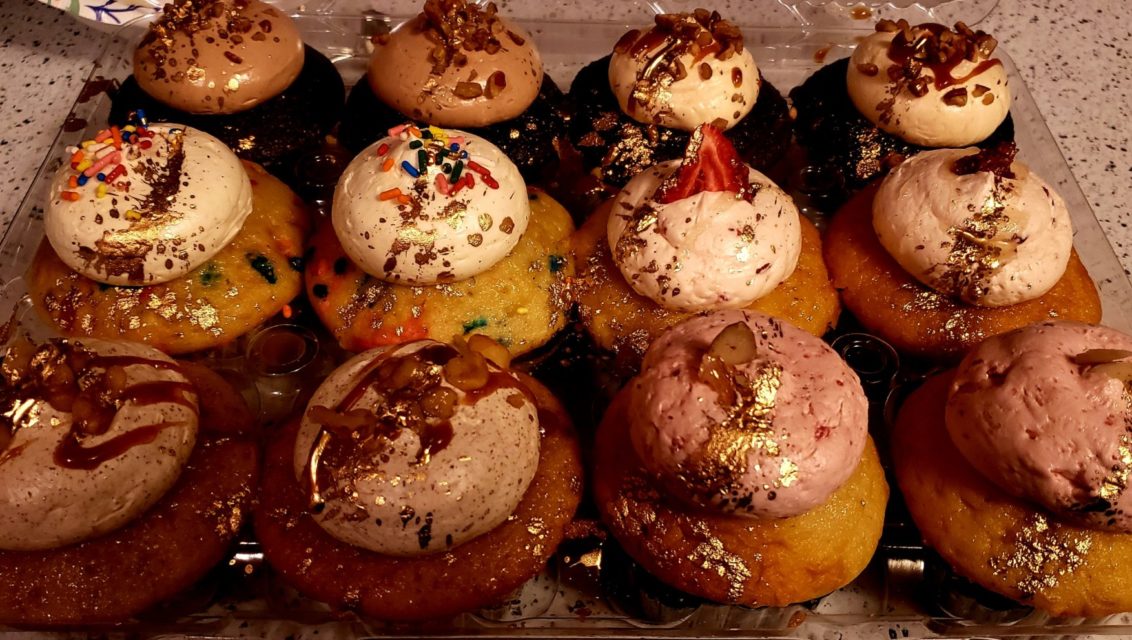 I don’t know if I told you about these cupcakes. I think I mentioned them, but I don’t remember and I’m not going to go back to check. Ultimately, is a probably longer than necessary story about why it’s a good thing to do good things, involving cupcakes.

Basically several weeks ago in January, shortly after the death of my Aunt and either right before or right after liquidation officially begun and I realized I was going to lose my job, a lady came to sell cupcakes in the center of the mall. Some weekends our mall invites local vendors to set up shop in the center of the mall, or to either of the wings… my mall is shaped like a cross, and its kind of neat to see what local people have to offer. A lot of times there are religious people selling crosses and bracelets, or people who press images and words on to tee shirts, or people who are selling homemade soaps and candles. Things like that.

Barb told me there was a lady out there selling cupcakes, and I knew after we closed I had to go get one because I love homemade sweets. I won’t buy cupcakes in a 12 pack at the grocery, but fresh baked anything from a bakery is like a delicacy. Probably because I can’t bake to save my life. Literally. And if it requires yeast at any point in the process, I won’t even attempt. It just doesn’t work for me. Cupcakes do not require yeast. I realize this. Moving on! Princess is snoring, growling, barking, and puffing air in her sleep and I’m getting distracted. I wonder what she’s dreaming about!

So after we locked up we went over to get a cupcake but due to covid she wasn’t selling them in singles- only packs of 6 or 12. When I saw them, I knew I had to go for the big box. They were expensive… $40 for 12 cupcakes. But I mean, look at them. There is GOLD on them. They are beautiful. My photo really doesn’t capture how fancy and beautiful these cupcakes are. I had a problem though because I gave my card to Justin because his card stopped working and he had to order a new one. Then I made myself look like silly because I asked her if we could manually enter my card, and I gave her my cell phone which has a photo of my card in it, only to realize it wasn’t a photo of my card but instead it was Justin’s card so punching in those numbers didn’t do us any good. So then I had to call Justin so he could read me the numbers on my card, so that I could punch them in on her tablet thing, so that I could buy these cupcakes. I really wanted these cupcakes.

And they were delicious. They were worth every single penny. I’ve never had cupcakes like these before. The icing, which usually I scrape off, was only lightly sweet but tasted strongly of whatever it was supposed to, so it was more flavorful as opposed to sweet. And it was so light, airy and buttery. And the cupcake was moist, and delicious. Again, not sweet per say, but flavored as it was supposed to be. The bananas foster tasted like caramel, bananas and cinnamon. It didn’t taste like sugar goop and cake from a box. It was incredible. Just incredible.

I did a google, and come to find out she was actually on Food Network’s Candyland which aired over the holidays. Some people loved it, some people hated it. I was in the latter category… I think it was a great idea, but it was a really awful show and I love me some Food Network. Except Guy Fieri and Giada… those two get on my nerves. Still. I was so excited to eat Food Network competition level cake!!

I got an email shortly after to review, which I usually don’t, but I did this time. I thanked her for her patience with me trying to track down my card to pay and told her that my life was kind of crazy because I had two deaths in my family and I was losing my job, so I’m a little bit all over the place these days. I told her that her cupcakes were the highlight of my life in that moment, and later on I fully expected to be 100% unashamed emotional eating on the couch. And again I thanked her for coming to the mall that day because she was the best part of my week.

So then two days ago she wrote me back. She apologized for not responding to my review- not that I expected her to because again people usually don’t. She said I was the first person to comment on her square app so she didn’t realize I left a comment. She said that people like me are the reason why she does what she does, and she understands what I’ve been going through because she had two deaths in her family recently as well and has also suffered job loss because she actually runs a wedding cake business, but all weddings in the past year had been cancelled. I guess that’s how she ended up selling cupcakes in my shitty mall. She said she wanted to make me smile, so she was giving me a free box of cupcakes and she’s coming to the mall Saturday (tomorrow!) and I can pick them up then or save my coupon for later. She then sent me a generic email $40 off, which again is the price of cupcakes.

I… cannot… even!! I sent her a message back saying, ARE YOU KIDDING ME?!? THANK YOUUU!!!!! And more. But that was the gist of it. I almost cried. And you know, some people might scoff at my comment, but especially since my Dad died I’ve just been trying to be honest and embrace my reality. Like I said before, I’m done pretending. I’ve got to be honest with me, with you, with everyone. What purpose do I have to carry on with a stranger? They don’t care about me, so there isn’t a reason to lie or pretend like I’m something or someone that I’m not. And maybe, if I’m genuine, something good will come of it.

So yeah, you might think I was being dramatic with my comment, but it was true. I’m okay. I’m in a good place. But I’m also very hurt, and very much healing. And her just being there was everything I needed that day. She literally made my day, and probably my whole week. I wasn’t going to outright say all that, but the opportunity knocked so I answered in my way. And now, I GET FREE FANCY CUPCAKES!!! YAAAAYYY!!!!!!

So moral of the story is: Live your truth, and not in a weird hipster way, if hipster is still what they’re calling the trendy kids these days. But be genuine. Be your real you, even if its hard to let other people see you that way. Be honest. Be open to whatever comes your way and be open to the process. Don’t expect anything from life or from others. Just be the best you, every day. Live in love, and love will reverb back to you. And you might get cupcakes. Just maybe!

Justin gave me my early Valentines day gift which was actually thoughtful of him. He gave me these bath salts that apparently have this vial that contains some live organism that makes the bath water glow which was something similar to what I wanted to do in Puerto Rico but never got the opportunity. In Puerto Rico, there are kayak trails where you can kayak out into the ocean through this rainforest area and the algae lights up at night and makes everything glow. Like a magical Disney Princess movie!! Well, these organisms are supposed to do the same thing in the bath tub. He also got me a candle that is supposed to accentuate the experience with a Amazonite crystal in it. Amazonite is a greenish crystal that is supposed to help with hope and optimism.

He also got me a bouquet of flowers from “Lovepop” because he wanted to get me flowers, but in the past when he has I always tell him not to because they die. People often ask me to cut my flowers for them, the ones that I grow, but I won’t. I’ll dig one up and give them a few to grow, but I won’t ever cut my flowers off because I want them to live. I know that’s weird. I just don’t like cutting my plants before they’ve died off for the season. I don’t want to harm them. I value them.

So I don’t know about bathing with bioluminescent organism- I’ll need to do a google. Maybe Justin is mistaken. Maybe it’s just glitter. But the paper flowers are actually kind of thoughtful. And this is nice. I’m kind of at a lack for words. I’ve said just about everything in my brain. But yeah, Justin was thoughtful in doing this. I thank him.

I need to go shower, hit the grocery and get some cleaning done today. The snow keeps falling, but the roads aren’t bad. We’re supposed to get hit again soon, so I need to make sure I can get out to the grocery while I have time!

Have a good day everyone.

shame on you! you should never post something so yummy looking without a warning to close my eyes!

Queen of Wands
3 weeks ago