Dad showed up at my job yesterday. I’ve known for a few weeks that he may or may not be coming to visit, but I didn’t know for sure. He didn’t know for sure. He called me to ask about the ‘rona, which I thought was interesting because he could and probably did call other people too. I guess that was his way of checking it to see if we were all healthy. He wouldn’t know- I haven’t talked to him since… March I think. My Dad and I have a very rocky, borderline non-existent relationship- especially when he retired and moved back home to Puerto Rico. Well, that’s HIS home- wasn’t ever mine. And of course, I shared this with Reign and Justin, that Dad might be in town. Two days ago Reign came home from daycare/school and threw his bookbag down and yelled excitedly, Grandpa’s coming tomorrow!! And I had to tell him that I didn’t know for sure, but yep. He’s here and he came to visit me at work but he barely crossed the lease line. He stayed for about 5 minutes and then left. Sounds about right. I had customers anyway, but it would have been nice for him to actually check out my store and be proud of me for something. And now I sound like a little salty baby. Moving on… 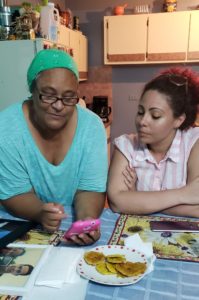 This picture is from early 2019 when we went to visit him in Puerto Rico. This is my aunt GoGo. They have a duplex house together, GoGo living downstairs and my Dad upstairs. I’m really glad that my Dad lives with her because I believe she keeps an eye on him. He got some kind of disease when he was in the Vietnam Jungle at war, and it’s kind of been at bay his whole life but now that he’s in his 70s, its starting to tear up his insides. That, plus his alcoholism and diabetes… He nearly died a few years ago, but he’s much much better now. Thank God for GoGo. She isn’t afraid to set him straight knowing the consequences. Consequences being supremely cursed up and down by him.

When we were there I freaked out on him and Justin but it really wasn’t Justin’s fault. Dad told me they were going to the store, but in reality they were going to the bar. Had I known, I wouldn’t have liked it but I would have been okay with it. But I felt so hurt to be left behind. And it hurt worse when my Dad said that he’d spent enough time with me. I just didn’t want to be lied to, and that set up the rest of our time there to be not so great. I felt devastated, because I allowed myself to expect more than what was realistic. I wanted more from Dad than what he was capable of. Haha, Justin told Dad that he needed to get back to me because I was angry… and Dad assured him not to worry. Justin asked why, and Dad said because I inherited that part of me from him.

And even though Dad arranged for my sister Maida and I to get together, though we only hung out for maybe an hour and it was awkward because we didn’t have much to say to each other… She mentioned that this was the first time she’d talked to him or seen him all year. Despite it all though, my dad looked proud. You could tell it was a proud moment for him to have both his daughters and his his 4 grandsons in the same room, at the same table, at the same time. That never happened before and will probably never happen again. Well, never say never. Except that you never know! Reign and Justin want to go visit again. Justin loves the island and Reign thought meeting his cousins was very cool. It honestly just felt lonely to me, and I’d be okay not going back.

It’s lonely feeling, and a sad feeling having a huge family- a sister I don’t know, three nephews I don’t know, uncles, aunts, cousins… so many cousins, all of them living their lives together but without me. They call each other, they know each other. They laugh together and have inside jokes. They all speak Spanish. But I don’t. And they don’t know me. And the ones that did know me barely remember me. I don’t remember all of them either. I’m just Jose’s daughter… and that’s relevant to them because they know my Dad. They see my Dad. But I don’t see their parents, so I can’t remember who they belong to and how we’re related. Maida is even more forgotten than I am. And actually for many years I also forgot I had a sister. Have. I have one.

And that really hurts. I don’t know why. It always makes me tear up. Even typing this out is making me emotional. There are very few things in this world that illicit actual pain in me. I’m quite emotionless otherwise unless you count the burning anxiety I harbor on a daily basis as emotion. But otherwise I don’t feel much. I don’t feel extreme happiness or sadness. I don’t get angry- not usually. I have opinions, but I don’t feel them. There are very very few things in this world that cause me to have a gut wrenching, tear jerking, genuine “sad”, and thinking of what I missed out on by my Dad giving up on me when my parent’s got divorced is probably the worst. And sure, I could reconnect with them as an adult, but its like pouring salt in the wound every time. Reopening a wound that has since healed over and over again. Maybe it’s because I remember them as a whole. I remember holidays and weekends… I didn’t have any friends but I never knew it because I was ALWAYS with my cousins, so I had tons of friends. Tons of family. We were always together… every weekend. Every holiday. And then we were never together… or rather, they are still together, every weekend, every holiday. I was removed.

One of my cousins had a falling out and refuses to acknowledge our family. And my sister doesn’t acknowledge us either and says its because my Dad has never bothered with her. She’s right. She grew up with a step dad who was like her father. But I didn’t. I just had this one for better or for worse… even if due to his alcoholism and anger, it was very much for the worse. He didn’t hit her, or spit on her, or tell her bad things about herself. He didn’t have her mom on up on the wall by her throat, or show her panties off to her friends like it was a joke. He didn’t toss out glass plates of food to shatter in the backyard because he didn’t like the taste. Maida probably doesn’t know what the ripe end of a leather belt feels like, or what it is for your skin to welt and you have to go to school like that. Maida probably wasn’t afraid. And I can’t understand why she is perfectly okay being surrounded by our family and having nothing to do with them, when I wish I could and probably shouldn’t. It should be fine for me like it is for her. And as long as I don’t think about it, it is. Usually I don’t.

My Dad being here in front of me at my store was exciting, but it was also violating. Like, I know you were coming to visit me because you felt like you were supposed to, but you really didn’t have to. I can love you from over here, at a safe distance for both of us. We don’t have to do the customary thing. We don’t have to talk about it. And I’ll be by your side when I get the call that you’ve finally drank yourself to death. I’ll drop everything and I’ll be there. I’ll take care of the funeral, make the arrangements. We’ll have to get a translator, but I will respect whatever your wishes are. I will do that for you, but until then, you don’t have to do this. You don’t have to visit me.

My aunt GoGo… Her son committed suicide- suicide runs deep in my family. My great grandfather on Mom’s side killed himself, grandfather on Dad’s side- Dad’s Dad, killed himself, as well as my uncle and my cousin. GoGo’s son. I have a feeling mental illness runs in my family which is why when the schizophrenia gene showed up in my DNA results I wasn’t shocked. My aunt Linda says uncle Manny has it but nobody talks about it and he takes medication. But evidently the Uncles who are stateside have had to go drive up there to rescue him from himself a few times.

I want to be like GoGo when I grow up. To me, she’s beautiful. She doesn’t care about clothes or make up but she cares about her hair. Her hair is long and dark grey, and she washes it and braids it up to dry. She didn’t wear it down much while we were there but you know, can’t blame her because it’s hot in Puerto Rico! I put my hair up too because the humidity and salty air caused frizz like I’ve never experienced in my life. Like electric shock without the electricity, haha. But Aunt GoGo… You can feel, see and hear the strength in her. But its a different kind of strength- the kind of strength someone learns when they experience things they shouldn’t have had to. The kind of strong someone becomes when they have to deal with things they shouldn’t have to, and deal with them alone. I think in ways her and I are a lot alike. Justin thought so too and that’s why he snapped this picture. Haha, GoGo didn’t want me to keep it because she said its a terrible picture of her, and its a terrible picture of me too. But its one of my favorite pictures ever. I hope I’m like her when I grow up. You know, she might not even be who I think she is… but nobody will tell me otherwise, so it doesn’t matter.

I think the pictures are awesome.  Just look at your expressions.  You can tell she is everything you said she is.  I wish I could write as you do.  Yours feels like I’m sitting at your table while you tell your story.  🙂