Oh some of the memories in that car. I never checked the oil and blew the engine at some point.

I managed to back out of the driveway at one of my apartments and ended up teeter tottering on the steps. It was snowing and the frame of the car was on the step and none of the wheels were touching the ground. My brother came over with that red truck and we wedge a pillow between the bumpers and he pushed it off the steps.

The sunroof started leaking so I put duck tape around it to seal it up. It worked wonderfully.

It took 2 people to open or close the driver side window. One to push the button and one to hold it in the track while the door was open.

That poor car experienced my first run in with Jack Daniel’s. I was mad at my ex, after work me and best friend went next door to a place called The Bucket Shop. We were wasted, this hole in the wall bar messed us up. I ended up in the back alley sitting in the front seat of my “POS Saturn” if you ask my ex.  I was barfing everywhere and wet my pants in the front seat at the same time. My ex did pick us up but was so mad. He dropped are drunk butts off at my friends house. I managed to make it to work the next day. I don’t remember if it was me or my friend, but the next day some stranger said wow you smell like Jack Daniel’s. It was seeping from our pores.

I remember when I first got my license and that car I drove out to my dads to show him. I think for a few months every couple of weeks I drove out there and tried to see him. I think I always blamed my mom and stepmom for us not having a relationship. It made it easier than thinking he just didn’t love me or want me. It was like here I am dad they can’t keep us apart now. I learned quickly it was never them. I stopped going, he never had much to say to me.

I think my ex only met him 1 time. I took him there to visit, I think to show him off. Like look dad this man loves me why can’t you? I don’t know really. After my ex and I broke up that first time in my 20’s, I emailed my dad. I don’t remember everything I said to him but blamed him. My dad called my mom looking for me. I drove out to his house again. He stood there crying and telling me he loved me and he was sorry for not being around. Throwing a pity party for himself really. Told me he never wanted to leave my mom but she made him go. A lot of BS I don’t even remember.  I did get tell him my feelings though but nothing ever changed. 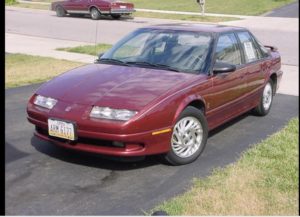 That’s not my actual car, I stole the picture from the internet.