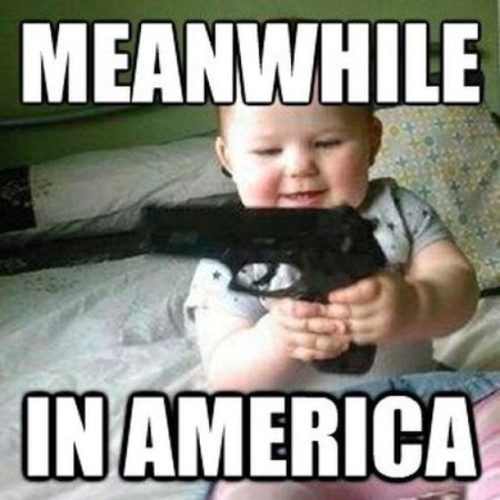 No points for creativity on shooting a bunch of people on Valentine’s Day.  It’s been done.  And with more panache.

Unlike most shootings, when the neighbors will invariably say, “He was a quiet man.  Never thought he’d do this, etc.”, this case is far more disturbing because authorities were alerted, but failed to act.  Nikolas Cruz, who has been charged with 17 counts of premeditated murder, reportedly left a comment on a YouTube video last year stating: “I’m going to be a professional school shooter.”

A user alerted authorities to the post.  Teachers were also warned about Mr Cruz, who was not allowed on campus with a backpack, US media report.  The FBI said it had investigated the YouTube comment but had been unable to fully identify the person who posted it.

I’m sure the authorities didn’t want to risk damaging Cruz’ self-esteem, or some such other liberal psychobabble, rather than confront the issue.  Here is someone who clearly stated his intent, and made enough people uncomfortable with his behavior that they said something.  If ever something could have been prevented, it was this.

I was talking to a friend’s daughter this morning. Open conversation about this. Each time I come back to it, I am so speechless…

@glitterampwings Between 1996 and September 1997, around 650,000 privately owned guns were confiscated in a mandatory buyback following a shooting in a café in Australia. Murder and suicide rates plummeted after that. Why not follow their lead? There is no 100% solution to mass attacks, but can’t the USA at least make it more difficult?

@bedlamhillfarm for sure! I would love to see this and watch numbers plummet!!!

I only saw bits and pieces about the coach / teacher who put himself in the line of fire. I didn’t realize there where 17 fatalities. So sad. There are so many troubled teens that authorities know about and can’t or won’t do anything about. Really scary part is that for every one that happens, there are 10 more that are thinking about it…

These shootings will continue in this country forever. This nation lacks the courage to stop it. This is on us.

I also read his mom just died, (november 2017) and he was hanging out with a white supremacist group that does “maneuvers” (whatever that might mean) but that he had a lot of disturbing posts on all of his social media. Then again (having been a teen once) a lot of their stuff is “disturbing” and “omg..wtf” type of stuff they find it hilarious adults are wondering if they have a sociopath in the home.

This kid did have a lot of red flags, but again, here we are. it’s become almost a daily thing. which is frustrating as I don’t see radical changes to eliminate this from happening. Again and Again.

@jdsnafu There was an article today that law enforcement visited his home 39 times (!) in 7 years for various reasons. (https://nypost.com/2018/02/16/deputies-called-to-suspected-shooters-home-39-times-over-seven-years/) So just bad police work?

I can imagine why people want to home school.