So far its been a very dry April. We haven’t really gotten rain at all…. we were supposed to get rain on Thursday, it got pushed back to today and now it’s been pushed back to tomorrow night…. there are drawbacks to living on the coast I suppose.  There are many drawbacks actually (especially during hurricane season  MY GOD…. since we bought a home here in 2015 we have been hit by a hurricane or tropical storm every single year.. Florence being the worst of them… our home escaped with zero damage as I stated in my last entry though my neighbors didn’t fair as well).  Wilmington NC was kind of ground zero for that storm and I live just outside of Wilmington… I’ll give you a ball park and you’ll get it depending on how old you are….and how into cheesy Stephen King 80s movies you are into… and this one is by far the cheesiest…

Ever see Maximum Overdrive… I’ll let you know it is by far the cheesiest, silliest horror flick I have ever laid eyes on…it will give you more giggles than chills… especially Stephen King’s cameo…. “This machine just called me an asshole”…. one of the scenes where a draw bridge opens up on its on… I drive over that bridge every time I have to go to a VA appointment…. no it doesn’t terrify me… and bridges over water like that used to… more so tall ones.

But the Dixie Cup scenes (please waste some of your time if you want to know what I’m referencing and haven’t seen it)… it’s a truck stop that is the main scene for the movie… that gas station set was actually filmed across the street from where my neighborhood just sits now…. when it was filmed my neighborhood didn’t exist… it was just woods. (Hence why my neighborhood is a cesspool for termites — we just had our home treated and bonded when we discovered termites in our bedroom wall– EEK!!!)

There is a scene with a newlywed couple driving and the annoying bride screams and hollers ALOT… and they pull into a little store (I’m not sure if it’s called the Kicking Mule in the movie but that’s what it is called now… she keeps hollering out the window “Curtis are you dead?!?” and yes I can imitate the voice… when they finally turn around there is a street sign that has a high school name on it… if you pay attention to it.. the high school name on the sign is my son’s high school… and we drive over those railroad tracks…  it was filmed mostly outside of Wilmington… just outside…I’m not more than a 10 minute drive (with traffic) from it… everything decent if you want to go to a good restaurant is on the other side of the Cape Fear River basically… which is where Wilmington is… I live on the opposite side of that river.

But living here I’ve learned something… you find the best shells on the beach after a tropical storm and other neat stuff too, you don’t go to the beach after a hurricane cause you just can’t…. it’s a hot mess, unless you live on the beach…. I’d imagine.  I wouldn’t want to live on the beach during a hurricane that would be terrifying.  I live in what’s defined as inland… there are two parts to my county… inland and coastal… But you can still smell the ocean in the evenings sometimes.  Other times you can smell smells from various factories one that produces a by product that smells like cat piss.  Not enjoyable at all.

It looks like we are getting new neighbors, the shitty ones moved out … the guy was drunk asshole…. and the woman was an amazon always Trumper…. I don’t get into politics… but this woman was a Trump NUT…. there is one thing to vote in line with your political party and another in following a person with absolute devotion and they weren’t married and the guy was a straight up alcoholic and when I started losing weight he started making comments to me that was making me very uncomfortable.  I’m very glad they left.  I’m hoping the new people are personable.  It sucks they got screwed… the people that left they left trash in the house and yard and apparently the house had termites and the realtor in the process of cleaning found their adult daughter’s drug stash.  I mean if you are selling a house for the love of God try to clean up, you would think.

They lived there for less time than we have been here and they never did fully repair the damage from Florence either.

I’ll be honest I’m just killing time here.. nothing is on TV… and I remember a time when Fridays were not a dead night… I have Ted on HBO…. my son is watching storms on his iPhone…. he does that… he tracks weather ALOT.  He is watching some hella storms in Mississippi.  And no he isn’t just watching the storm footage, he is watching the high intensity radar and storm velocity loops and God knows what other technical verbiage I  am leaving out…. yet he is still struggling with math .. hopefully when he goes back into the classroom starting Monday his grades will go back up… remote learning with math and such has been a bitch for him…  Math and him don’t agree… and he was having a hard time with the remote stuff but with the numbers finally going down and the vaccines rolling out we felt okay with him returning to the classroom.

I’m getting my second Moderna vaccine on the 27th…. my husband wants to wait for the J&J shot…. he wants the one and done shot… and my son is on the same list…. even though my husband is a diabetic… he wants to the J&J shot…. he has heard the 2nd shot of the Moderna is a bitch…but the VA is giving the Moderna so that’s what I get.  My arm is still sore from the first shot… I made the mistake of saying I had my “V” card…. yeah I guess that was the wrong language…. I realized after the words came out that has a double meaning and I lost my V card a long time ago….

Humor is part of what has kept us sane here.  Humor, Cats… and of course the ever wonderful Tigger the Wonderdog. 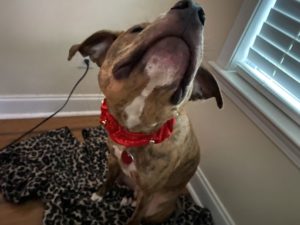 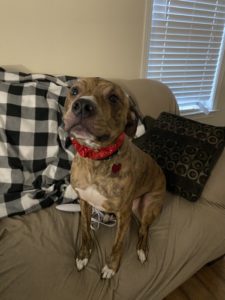 Isn’t he precious…. these are from Christmas…. He’s my little Pit/Whippet mix… He’s asleep at my feet right now on the sofa.

Pretty much where he always is….

And that’s pretty much it… my hands are starting to complain about the typing.

I will have to look up the movie again.  I saw it when it came out, but forgot most of it, so it can be a fun rewatch.
Tigger is a handsome guy.  I’ve never seen a pit-whippet mix before.
As cute as your guy is, I think if someone were to start breeding pit-whippets and called them Pippets instead, they’d sell like hotcakes.