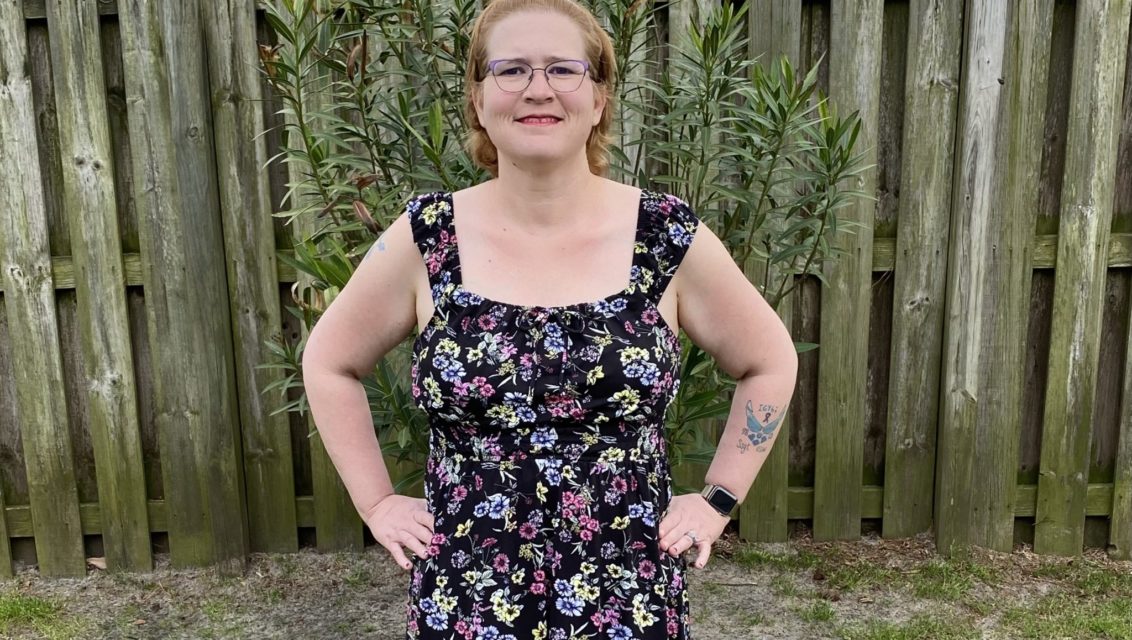 Its been so long since I’ve been on Open Diary, my first couple of entries were in all honestly test entries… and I didn’t get many hits and I really didn’t come back to check cause an iPad isn’t a good source for writing here.  It’s been a few years hasn’t it.  Many trials and tribulations, many changes in body and soul (you can see the body part in my featured image I’d imagine and I thank a little over a year on WW for that).

The last time I actively wrote on here I guess I was a train wreck, so much drama with my mother always stalking me on here, my being paranoid over every single person being an agent of her…. I’ll be completely candid I was a wreck.  I pushed so many people  away it wasn’t even funny.  I can’t even remember how many years ago that was.  My family was also completely intact, it isn’t totally in that way anymore, I’m completely estranged from my now adult daughter now… it’s a long story that I’d rather not go into for her, its ‘her truth’… that seems to be a thing these days… I don’t get it.

I guess with the weight loss I don’t look 41 do I.  A whole lot of weight loss there huh?  It has been a job of work.  And a whole lot to catch up on right?

First things first… we are no longer renters… we haven’t been since 2015 (I think that’s right, my memory lapses, I have a condition called POTS, it causes brain fog….among other things… POTS stands for Postural Orthostatic Tachycardia Syndrome.. I’m still learning my MacBook Air that I just got yesterday so I’m not hyperlinking it… feel free too look it up for now and I hope that’s not a terrible inconvenience).  We bought our first home just outside of Wilmington NC…. and boy has that been an adventure, I grew up in NC… and I do not remember this many hurricanes hitting this state but boy golly have we not been hit by this many storms each year.  Florence was the whopper, we were blessedly lucky, our house was completely and totally unscathed, our neighbors did not all fare as well, lots of shingle and fence damage, a few neighbors had more roof damage… the surrounding area flooded.. our neighborhood is well above flood plain luckily.  We did not lose one single shingle.  Our house was built after the other houses in the neighborhood by a builder that was separate from main builder in the neighborhood and the reason, because the original house on this plot burned to the ground the year before as was the house next door.  The suspicious thing was that BOTH houses were owned by the same person who owed back taxes yet the neighbors believe it was caused by someone putting embers from a bonfire being put in a trashcan of one of the houses.

It is a beautiful home, it has marble countertops, stone veneer on the front…. a garage door that is rated for a category 3 hurricane (that probably helped during Florence I’ll bet).  A very nice backyard with a 6 foot private fence that is perfect for my dog Tigger to play in (well he goes out to potty, poor baby is allergic to grass if you would believe it… I would have never imagined a dog would be allergic to grass I have to give him Benadryl in the evenings sometimes to keep him from licking too much and sometimes a special conditioner rinse which he will patiently wait in the tub for it to sit for 5 minutes without shaking or anything cause he is just such a good boy.  Can I insert other pictures? 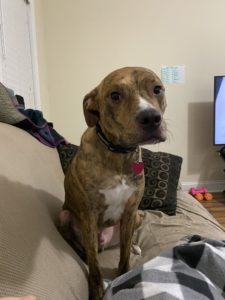 There he is…. That’s my Tigger… He is a Pit/Whippet mix… gentle as a lamb and quiet too… rarely barks and is extremely submissive to Fred (one of two or our cats).  If you remember me you will remember we had several cats over the years… our main was was Aslan, well he passed nearly 4 years ago now I think…. Gosh I actually made a post about it here… Thats when we got Fred…. Fred is actually Tigger’s best friend but also, Tigger will not eat if Fred is near his food bowl… its a thing… cause Fred wants Tigger to be clean when he is eating and insists on licking his eyeballs while he eats..he also insists on licking his face if Tigger is in our bedroom window.. Fred will jump right up in the ledge and start licking Tigger’s face (one of the passing neighbors who was walking their Great Danes was talking with us and said “there is no dog in that dog”. 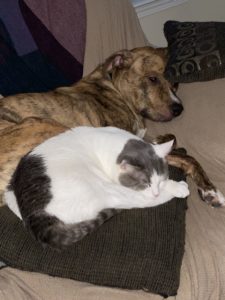 That is Tigger and Fred… They are cuddle buddies… Fred is my son’s cat mostly… He is going on either 3 or 4 (he is the same age as however long as Aslan has been gone from us… He was actually born on the same day that Aslan was born… its funny that way… and see Aslan died 5 days after his birthday we still miss him greatly).

We still have Freya… I don’t know if any OG people are on here or remember me…. but Freya was our all grey cat, she is 1o years old now… she has really really come out of her shell…she absolutely insists on pets every single night… will tap us if we don’t pet her…. 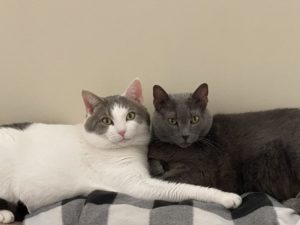 That’s Fred and Freya….  Don’t they look sweet together.  She is still gorgeous.

As for me.. yeah a lot has changed.. mostly my weight.  I hear all the time about the “Covid 19” — regarding weight…. well I started Weight Watchers in January of 2020 and I weighed in at 260lbs…. at my heaviest I was closer to 271-273…. as you see in my featured photo…. as of today I’m down to 165…. My weigh in day is Mondays…. but I can’t help myself… Every day I do 45 minutes of Yoga in the morning and on Mondays, and Fridays I do a 10 core workout on Apple Fitness and on Tuesdays and Thursdays I do a 3o minute Strength workout on Apple Fitness.  It has seriously paid off.  Like I said in my profile thingy, I seriously thought that I’d be carrying that weight the rest of my life but in January of 2020 I found out I had severe arthritis in my right now with zero cartilage around my right knee cap and moderate arthritis in my left knee yet too young for knee replacement…so serious wakeup call (plus watched way too many episodes of “My 600lb life”…. I was like I seriously do not want to become like that).

So my weight loss journey started and hasn’t stopped.  My entire viewpoint on food has changed and the way I cook has changed.  I watch my portions, I don’t snack on junk food anymore, mostly its fruits and veggies and lean meats that I eat and honestly the WW recipes are really good and I cook dinner for my husband and my son (and my husband needs low carbs anyways being a diabetic). 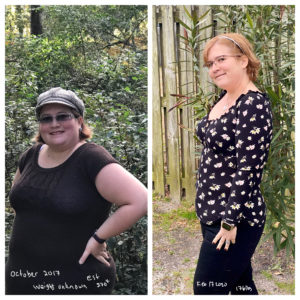 This was before I got below 170… But I totally look like a different person.  I had bought (when I took that picture) a pair of skinny jeans… I couldn’t get them on… guess what!?  I can get them on now and it feels fabulous!

I have so much more energy.

As for my demons…I still have them… but the VA… their mental health clinic has not checked in on me since Covid hit.  I figure if they don’t give a shit about me, I’m not giving a shit about them.  I am so uber focused on my yoga to try to get me through some of it that I get really upset if I have to miss a yoga session.  It doesn’t solve everything.  Like I said I have a lot in my head.  It does bother me I have a grandson that I won’t know, trust me I’ve tried to reach out and got a slap in the face for it.  I’ve been demonized … its fine… life is what it is.  She has ‘her truth’ and ultimately she will have to live with the decisions she makes.. I am not my mother, I’m not going to stalk her on the internet and try to know everything that is going on in her life if she doesn’t want me there.  That is her decision, I’m not happy about it…. but at the same time she has done a lot of hurtful hurtful things… the only thing that pains me is that I have a grandson I have never met.   With regards to her, its hard to get past some of the things she has said and done to me, to her stepfather and to her brother (and believe me her brother won’t have her brought up because of some of the things she did to him).

Like I said, long story that I don’t really want to go too much into.  Drama is too much to go into and I’d rather keep my vibes on the good side as much as I can.  I have enough stress in my head with life.

Good thing is I got my first covid vaccine and get the second at the end of the month.  I used to be obese… but I also used to be a smoker.  We quit when we found out my father in law was dying from cancer and that was also a sad time and we still miss him greatly.  He was the only man in my life that was a true father figure to me… I miss him every single day.

But alas, I do have to go.  I have dinner to get to, Tigger is sleeping next to me on the bed and I have one last stand ring to close before my watch dings at me to stand up in about 10 minutes.  I do like having a keyboard again…. this is nice….I miss typing.  The magic keyboard on my iPad isn’t like an actual keyboard on the MacBook Air that’s for sure. 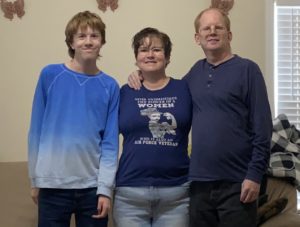 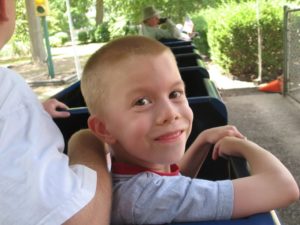 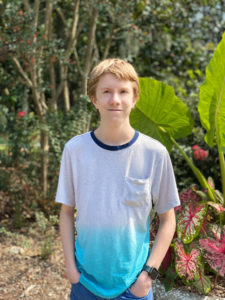 But this is what’s left of my family and what would be left anyways since my daughter is all grown anyways.  If you remember me from before you remember my son as an infant…..The oldest picture I could find of him that I have is from 2011… But he has grown up into quite the handsome young man (especially when his hair is cut) and he looks just like his father.

But that’s it for me folks….I’m back….If you remember me great… I’m not the same… I’m older, maybe a little bit wiser.. definitely a whole lot lighter….and stronger….

Congratulations on your weight loss and new house! Bravo! As for people reading what you write I suggest just write for you. That way no disappointments about hits and attention your writing gets. You have done a fantastic job with yourself and your family. Bravo!