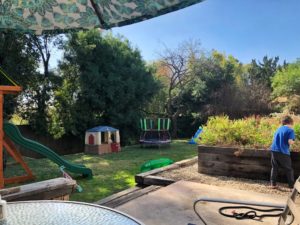 Went out last night with three relatively new friends: Mara, Michelle and Sylvia (I include their names because in rereading my old diary, I found myself struggling to remember which friend or boy I was talking about and admonishing my 25 year old self for not including more details).

Anyway, we each have kids who are either in Reese’s class or Max’s and we often spend afternoons together at the park with our kids and others. But as it turns out, these three women (and one other who couldn’t make it last night) are becoming quite good friends of mine, beyond shared interests simply because our children play together.

Normally, my perfect evening consists of eating dinner, without any little voices competing to talk over me or stealing my food, and a show or three that’s waiting to be watched on the DVR. Eric and I are usually already exhausted from the day and the kids and we both love staying home and indulging in our shows or video games, for him, or baths, for me, etc. We’re old. A night in is way preferable to a night out and I’m not even one bit remorseful about it.

But one of the new girlfriends had a reason to celebrate something and there’s a new craft brewery that just opened in town. So plans were made.

We got blonde beers and a little table on the patio. Though it may be winter in the rest of the country, it’s certainly not here. It’s between 79-85 degrees any given day and the nights hardly go below 60. So the open air patio is where we sat. And talked. And talked some more. And laughed. I got pretty buzzed off of only two glasses of beer, but A I’m a lightweight and B I hadn’t eaten much during the day.

Then we moved along to a restaurant down the street that served a full bar for something other than beer. I recall talking about husbands and this one mom whom we’d all had separate instances of displeasurable encounters with and it was quite fun offering up each of our run-ins with her.

I was super tired by 11pm or so and had barely touched my mojito. I knew that if I finished it, I’d be hungover today and being hungover today would’ve been a nightmare with two kids on the loose and itching to get into trouble.

In fact, we’re outside in the backyard right now (see above photo, taken a few minutes ago) and they’re involved in random little projects that aren’t actually holding their attention for very long, just seconds away from complaining of boredom.

Can’t believe I even had the time to type this all out.

Wow this entry is boring as hell. But yeah, I suppose so am I. Happy, but boring. I can live with that.

We’ve reached the age where boring isn’t a such a bad thing.

@cyndication YAS! So true. Boring is the benchmark! 🙂

Boring is my goal! I’m thrilled when I achieve it. (Says the woman currently lying on her couch on a Saturday night – a previously unimaginable Saturday night activity).

Glad and you enjoyed a little time out with new friends – they are a rare find as you get older, so something to treasure. And laughter is always great.

hope your night is relaxing and there’s a bath in there for you!

I remember smiling when you once said to me “Why don’t you 2 go out at night??? You guys always stay home.”

I knew you’d figure it out someday.

But am very happy you went out w/the girls. I could throw in words like Balance, Serenity, Making Time for everything, etc but that would be too “mother-erly” so like the rest of it, I’ll just watch as you learn to wrangle Life. You have such a good handle on it so I get to relax and not worry 🙂 xo

Your description of the evening makes me thing of the 3 women on the show “Big Little Lies”. Have you seen it? If not, check it out, it’s a good one.

I don’t see it as boring…I see it as living a good life!

And I know you have nothing else to do 😀

Glad to be back and catch up on my faves! And no – the entry wasn’t boring 🙂