This one is about my teddy bear, Mr. Bill.

Mr. Bill is the first teddy bear I bought with my own money. I was seven years old, and i wanted a new bear to be friends with my old bear, Brian. Even though I had a veritable​ kingdom of stuffed animals (this was before the hurricane killed the ones i didn’t hide in the car and take with us), the biggest bear was in charge, and he needed a best friend. (I was big on best friends, always hoping I’d have one someday; I wasn’t yet old enough to know to outwardly scorn something I wanted but couldn’t have.)

Mr. Bill was a nice, friendly brown bear. His arms were already open for a hug, and he wore a yellow ribbon (long since relinquished to the mists of time) tied in a bow around his neck. He was definitely a boy bear, though, because all real teddy bears were boy bears to me back then, and, if I’m being honest, that’s still true now.

He cost $7 at the discount store next to our church, and that was exactly what I had saved up from my allowance. I was amazed at my good fortune and I felt so excited to have just the right amount. He was a great bear, and I picked him out from his fellows right away. This bear was going to be best friends with me and Brian. I picked him up and hugged him to seal the deal, and it was so. (Even now, if i hug a teddy bear, I find it very hard to leave him behind–he’s already a “him” to me. I avoid picking up teddy bears which I don’t intend to purchase.) I waited in line, handed Mr. Bill (I had decided to name him after my dad’s best friend​s) to the clerk, and got my money ready…

But the register said $7.06. I didn’t have six cents and i didn’t understand why the price had suddenly gone up. I pointed to the price tag on his foot, which was a bright neon sticker with a “$7” in large, bold, lettering. The clerk said something about paying extra. I showed her my seven dollar bills, almost two months of my life, but she shook her head. I started to argue (I was a very argumentative child and i always had at least two rounds of arguing in me before i cried), but the woman behind me in line said she’d “pay my tax,” whatever that was, and suddenly i had enough money again. I gave it to the cashier and took my new teddy bear. Then I hurried out to the car, where my mother and sister and baby brother were waiting, and eagerly showed off my purchase only to be promptly scolded for wasting money on another stuffed animal.

Brian was the king of my stuffed animal army, but Mr. Bill was his right-hand man. When I went to bed at night, I always hugged Brian and put Mr. Bill behind me to guard my back from that side of the bedroom. When we evacuated fir Hurricane Andrew, I snuck as many of my stuffed animal friends as i could into the back seat of the van, and lined the others up against my bedroom wall. I almost left Mr. Bill behind to be in charge until our return, but, very fortunately, chose a fat cat toy to be captain instead, and took Mr. Bill with me. Out of all the cats and dogs and bears and others of the vast animal army I left to guard my bedrooms, only one, a small rainbow unicorn I’d bought at a yard sale, survived. (I had nightmares, after, of the fat cat asking why i left it, and others, too, asking why I hadn’t chosen them. For years, not hiding more of my animals in the backseat was a large, weighty, regret, and even now, when i can remember barely any of the animals that were lost or evacuated, I feel regret.)

By the time i was leaving for college, Brian was a little too worn and fragile to risk taking with me, so he sent Mr. Bill in his place. I didn’t pay any attention to my mom asking me what my roommates would think of me sleeping with a teddy bear. I brought others stuffed animals, too, but they were mostly to decorate and plump up my bed. My friends in college all respected that they could throw or hide or possess the others, but Bill was sacred. Even after I got married, I slept with Bill either tucked into my arms or at my back.

When my husband left, Bill was still there, and I would hug him to my chest, bury my head in his back, and rock back and forth, wailing and sobbing and, sometimes, screaming. Bill didn’t mind. When i found myself in a psych ward later that year, having attempted suicide, I begged and wheedled like a child until they let me have him. Then my mother finally got me out of her house, and it was just me and Bill and the cats in an indifferent apartment less than five minutes from a cheap liquor store. And then one of my cats, my best cat, Imhotep, died, and there were fewer of us. I was drinking one night, like every night, and, as I sobbed drunkenly (I always ended up weeping), I suddenly snatched Bill away from me and demanded from him answers as to why things were this way: why didn’t Peter love me anymore, why had God taken Imhotep away, why couldn’t I just have liver failure and die? Bill didn’t answer, and suddenly I noticed that his arms that seemed to reach out weren’t reaching for me, and I couldn’t see anything in his dull plastic eyes but the scuffs on the surface and they were not looking back at me after all.

That was the loneliest moment of my life.

I screamed that he was nothing but a stupid toy made of fabric and fluff, and old besides, and cheap, from some discount store with a hundred more just like him but better, and that he had never really been my friend, and that he wasn’t real, and that I was glad because he didn’t love me and he was a liar and I hated him. I threw him across the bedroom and out into the hallway, screaming “I hate you” so fiercely that the cats followed. I screamed it over and over, until my voice was hoarse and my throat ached, and I wept and rocked with empty arms before me, unwilling to hug myself.

I felt deep remorse almost as soon as i could breathe again. I retrieved Bill and squeezed him tight against my chest. I told him that i was sorry, that I hadn’t meant any of it, and that I loved him. He forgave me, of course; we were best friends, after all. Later that year, he was the first, second, and third item I told my parents to bring me when I was hospitalized for liver failure. He didn’t say anything about my earlier wish and I didn’t know whether or not I still wanted it to come true. Bill went to treatment with me when I was discharged a few weeks later, and later survived several crazy halfway-house roommates. Almost exactly a year after I had been admitted to the hospital, Bill and I returned to Memphis, where Brian was waiting. Brian and Bill, best friends forever, are still guardians of my bedroom.

A very small part of me can admit, just this one time, that there’s nothing in Bill’s hugs that doesn’t come from inside of me.  Just for a moment, I can grow up and know that a teddy bear is a teddy bear.  I can know that the love I feel from him is really the tiny part of my heart that still believes I deserve to be loved.  I can know that the love I feel for him is the only way I know how to love myself. But just for a moment.  I don’t want to know these things and have to poke at the deep wounds I’ve bandaged up with a teddy bear.  I know the only thing I need to know: that, one way or another, as long as Mr. Bill is with me, I’ll never be alone.

Mr. Bill only cost $7, and that was with the yellow ribbon. His fur isn’t sleek and lustrous anymore, and he has needed emergency crotch surgery more than once. His nose is scuffed and dented, and his eyes, which used to be bright black and shiny, are criss-crossed with scratches over a dull patina of 27 years worth of best-friend duties and travels. I would reach into a burning car to rescue him and I’m sure he would do the same for me. I wouldn’t sell him at any price. 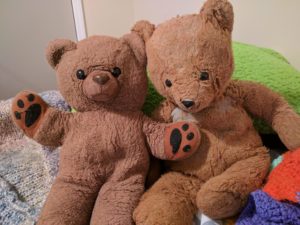 Tears streaming down my face. I am touched to my core. Thank you for sharing. I , for one am touched with love & feel goodness!! I thank you for accepting my friend request. I hope I will be a good friend to you, in OD. I am many years your senior, and I admire your transparency in telling your story. I have a teddy that my middle daughter gave me, when her Dad, my late (ex) hubby was dying of Cancer. I named him prayer bear, because he prayed MANY hours over the brief 7 months of my darling’s suffering and dying. Prayer bear is my best friend, too. In fact, I might even write my & his story on here. Hang on you are loved!!!!!!! :*)

Thank you for your lovely response. 🙂 I look forward to our OD friendship.

@dolorangelicus : You are welcome, and I do too!! 🙂

Thanks for this / enjoyed reading.

I have my own Mr. Bill… and his name is Hermy (short for Herman). Mine was given to me as a gift, in Xmas of 81. My grandmother made this bear for me herself, and she passed away July the next year. My brothers have birthdays in March and May, but mine is in October so it was the last thing I got from her. It’s the oldest thing I have and I will never let it go… not for anything.

Hi; RYN: I don’t know about backgrounds yet; I think it will come when all this stuff is working well!! I think my old name was: On The Journey/// or// this is not my final home//// lol

I love your Brian and Mr. Bill now too.

I have an amazing love for Teddy Bears as well. I have two on my bed. They really do bring comfort. Give yours all a hug for me.♥️