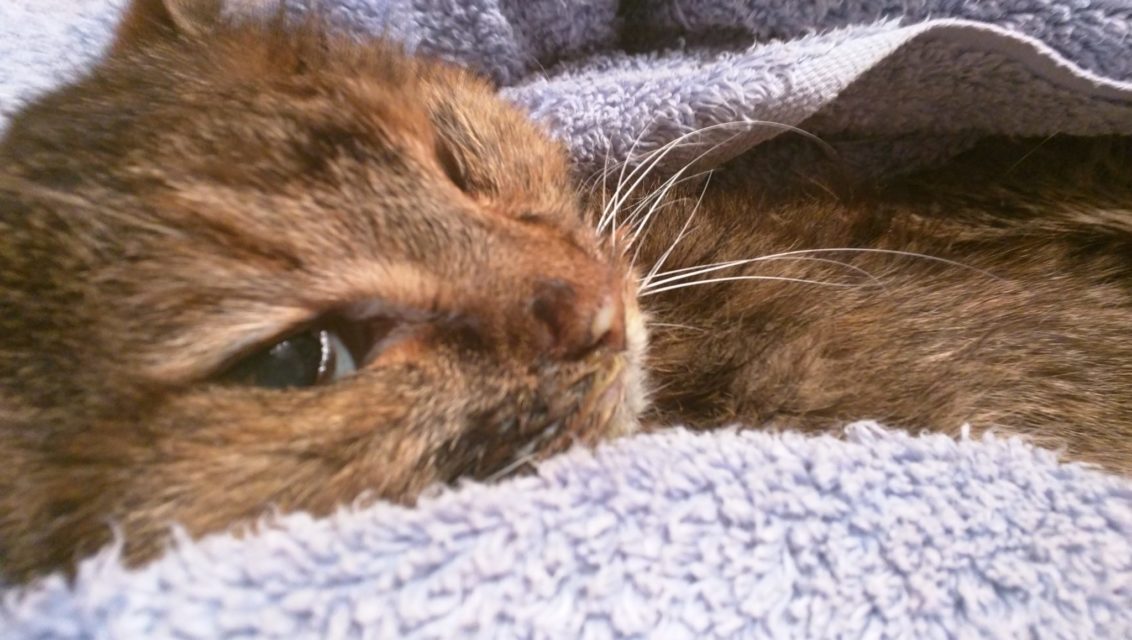 She died in my arms about two hours ago.  My dad came with a box to take her away about an hour ago, and finally convinced me to let him take her maybe thirty minutes ago.

I really did pray for her, and not to Ceiling Cat. When she rallied two days ago, I thought that Christ had healed her.

My belief was so solid that I wasted time writing that stupid joke of an entry when I knew she wanted me to hold her.

Today, I had been in the bathroom, trying to put my hair up, for at least an hour when I heard her meow.  I looked, and she had made it up onto the piano bench, but now she was trying to slide off.  I hurried over to her, but I couldn’t get there in time, and the tumbled to the floor.  She had peed on the bench and been laying in it.  As I bent down to gather her up, she made an odd gesture, reaching out with both arms, twice in succession. I cuddled her and told her we’d go get nice and clean and dry in the bathroom.

I was washing her by the bathtub, holding her in my lap and dipping a cloth into the warm water, when she reached for me with both paws again, again twice. I was cradling her and telling her what a good kitty she was and her eyes just…went out. And then her neck went limp and her head fell to the side. That made her look broken. And dead. I kept trying to hold her neck straight as I clutched her to me and wailed. I crawled into bed with her, holding her tight and screaming crying begging for forgiveness apologizing promising I’d love her forever.

The light really does go out of your eyes at the moment of your death. I didn’t know that.

I has the money and I was just waiting for the appointment. I actually did the hard part.  Why didn’t I just take her somewhere else, days ago?

I was just so sure that God had decided to let her stay.

I wish I could have gone with her.  I don’t like it here and I’m so tired and I don’t want to stay. I want to go with Ankhesnamun.

I made sure she didn’t look dead when I wrapped her in a towel and laid her in the box.  I kept redoing ir until she looked comfortable and her neck was straight.

Sorry for your loss, that’s heartbreaking.

Im so sorry. Dont go too deep into the sadness pool, your heart was in the right place. At least you were with her.

I’m so sorry for your loss.

I am so so sorry. My heart is breaking for you.

I’m so sorry 🙁 Thankfully, you were with her when she left and she’ll always be with you in your heart.

I’m so sorry! It is hard to lose our precious fur babies. Thinking of you.

So sorry for your loss. One of our cats died in my arms, and it was profound and shocking to see her fade. 💔

I am so sorry for your loss. She knows you loved her. I hope you find comfort in that.

I’m so very sorry for your loss. It’s so painful I know. My little Tia girl passed in my arms. I’d had her for 16 years. Life is different when we lose one of our fur babies. Hard to explain but I know you know.

My sincere condolences and I’m so sorry for your loss.

~ be at peace in kitty heaven Ankhesnamun.

So very sorry for your loss. I had a similar situation with my cat years ago. You did the best you could and I’m sure she appreciated having you care for her all the way to the Rainbow Bridge.

And there is nothing wrong with taking a final picture, it’s beautiful. In fact, there was a Victorian tradition called, Memento Mori photography in which a final photograph was taken of a deceased loved one so they could be remembered and aid with the grieving process.

lots of hugs and love from here.

I am so very sorry for your loss.

I am so sorry, and there is nothing to say that makes it better. I hope you at least have some comfort in knowing people rallied for her. She was so loved, and she knew it.