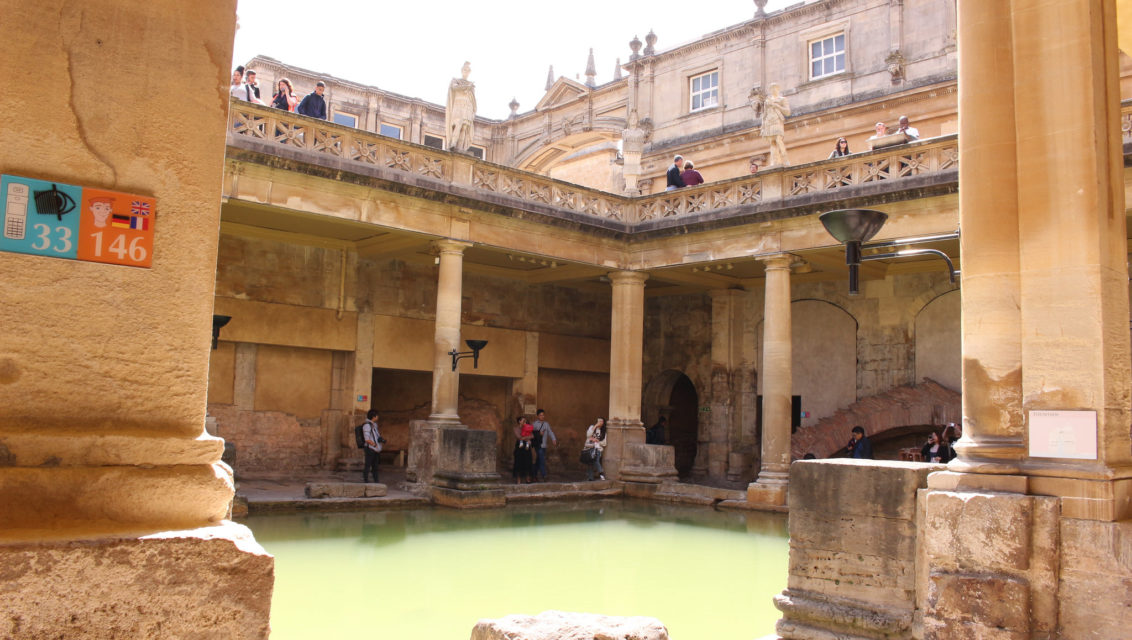 I’m just going to apologize right now for what will hopefully be a tremendous influx of entries over the next few days… I need to finish this!!! A year ago today I was in England, and I am STILL writing about it!!! So I am determined to get it done, and I will not be at all insulted if nobody reads it. I love having these travelogues to look back over, and they are great references for future trips. And there WILL be future trips. Not anytime soon, unfortunately (sighs of relief all around, I know) but one day. So, I’m doing this largely for myself.

I’m putting our second Bath day right after our first Bath day, as if we did them on sequential days, even though one was Sunday and one was Wednesday. Now I’m on a Bath roll and at this point it’s hard to remember what we did on which day anyhow. Even with my paper travel journal. Next time I’m doing this as soon as I get back.

On Wednesday, we toured the Roman Baths. They date back to 60 AD or so, and aren’t used for actual bathing anymore due to the original lead pipes (advertised until WW2 as an excellent source of radioactivity!) and fear of infectious diseases. The Thermae Bath Spa is nearby, though, and you can experience the famous waters there. We didn’t, as it’s pricey and we hadn’t brought spa-wear. But the Roman Baths are really interesting even without a dip in the water. (OH, you can also drink it at the Pump Room and we managed not to do that either!) (OMG, looking at their very nice website, I see that you actually CAN taste the spa water from a fountain in the west baths– how did we miss that???)

I think I said way back in an earlier entry that we didn’t pay for admission to anything that wasn’t English Heritage -we got the pass and that got us into all sorts of sites like Tintagel Castle and Stonehenge- but I forgot about this, which was not English Heritage and was around $20 US. And of course poor Kim, who was already very concerned about finances, had a little Financial Draaaaaama right here at the Roman Baths! Not to the extent of the Lost Passport Disaster from last trip, thank god, but it was upsetting for her. When she tried to buy her ticket for the Roman Baths, her credit card got declined. And they tried it again, and it got declined again. Tried it a third time… declined! At that point I just paid for her ticket, but it was very strange as she had been using that card for everything since we got to England. So of course she can’t enjoy touring the Roman Baths until she figures out what the hell is wrong with her card, and she proceeds to spend forEVER on the phone with her card company. Understandably – I’m sure I would have called immediately too, and I just wandered around taking pictures and hoping it wasn’t going to be something serious.

Long story short, it was pretty serious, in that her card company had mailed her a new card, which arrived at her house after we left, and then they cancelled the old one before the new one was activated. With what amounted to no warning- they didn’t call her or email her. Well, not as far as she could tell; Kim does have some, ummmm, issues with her voicemail being full all the time and she’s always got so much junk email that she doesn’t see the non-junk… so really, maybe they did try to get in touch with her. But the really maddening thing was that this had happened BEFORE we left, and they knew she was using it overseas- she’d called to let them know so that her card wouldn’t get cut off while she was traveling!! If this had happened to me, I would have been okay because I took three or four cards with me. I only used one, but I took backups in case something like this happened.  She only took that one and her debit card, because she was afraid of spending too much money, and she didn’t want to use her debit card because it takes money out of her checking and she didn’t have much in it. She DID have a card that her mom loaned her, at least, but didn’t want to use THAT for reasons I won’t go into. Suffice to say, she did have to use it and now she knows, take plenty of cards!!! You don’t have to USE them, just carry them as backups. And maybe don’t take big trips when you’re that worried about your finances, but that will never happen unless she wins the lottery. Poor Kim is not good with money. She makes more than Baker B and I do combined, but I’d been saving up for this trip for ages so had plenty.

ANYHOW, back to the story, which is now going to be a million pictures. Starting with this visual of Kim on the phone with her credit card company! 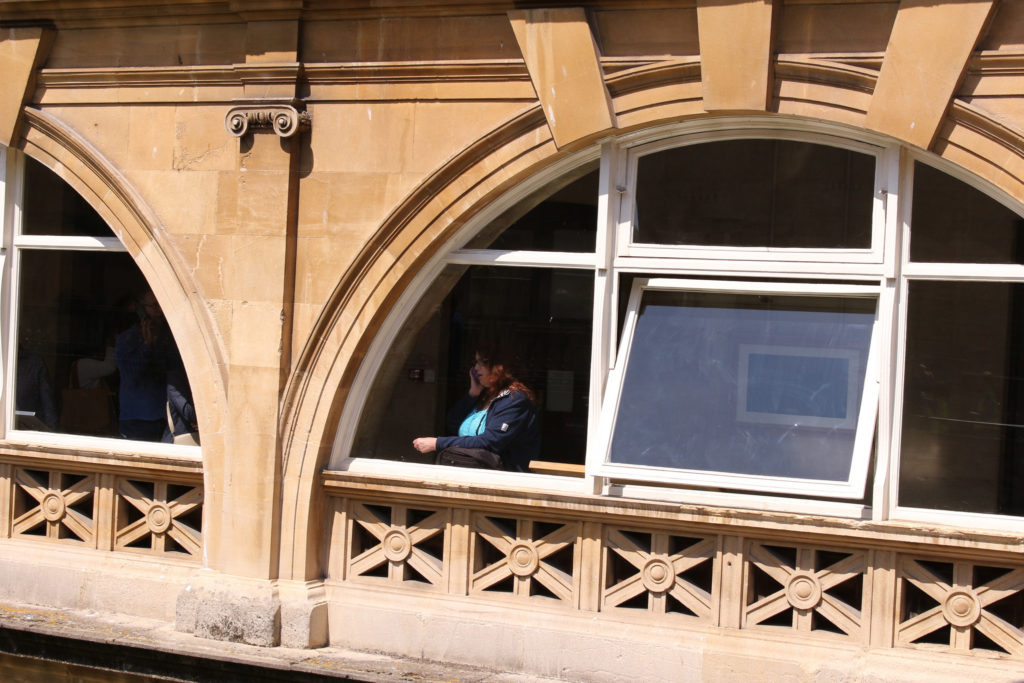 I loved the entrance to the Baths – 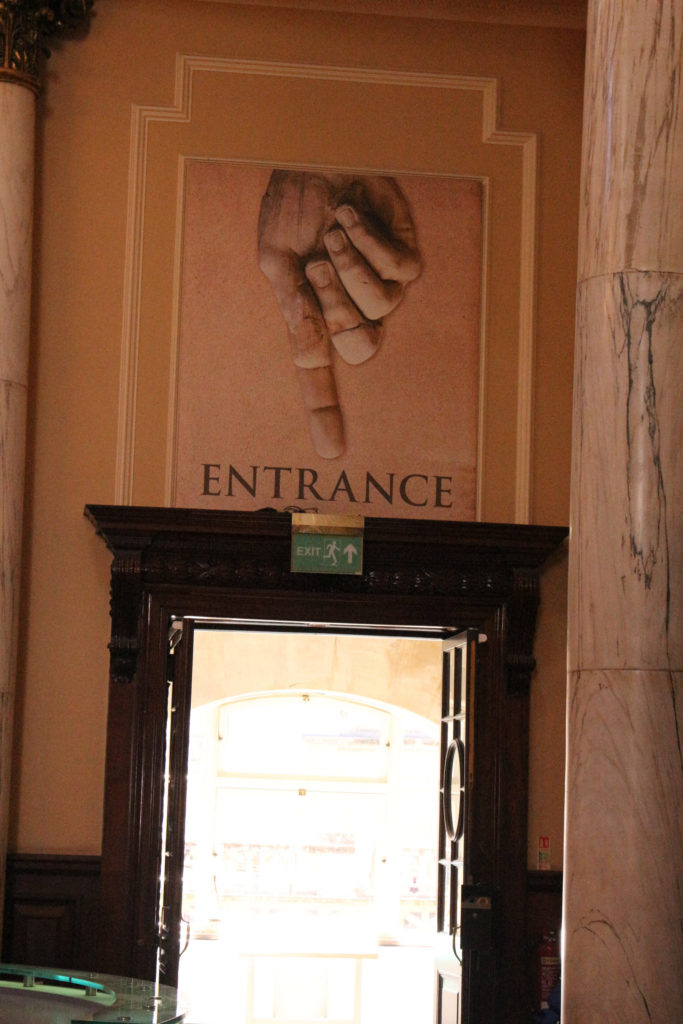 There was a lot to look at as I wandered around for ages waiting on Kim to get to the bottom of what had happened to her card. These statues were Roman rulers from the days of Bath being a Roman city. 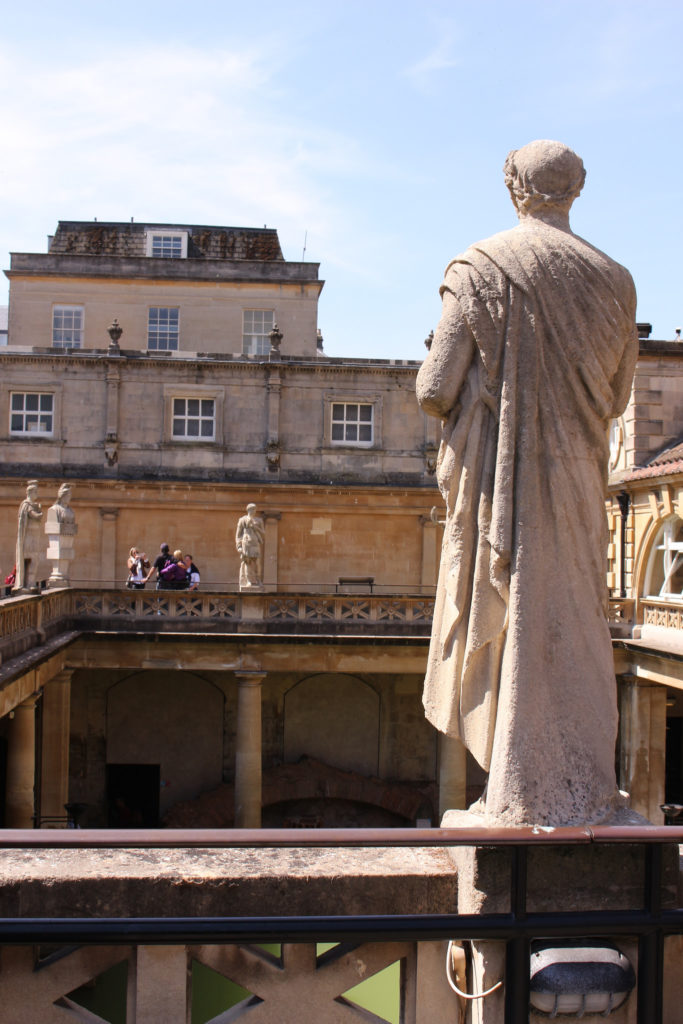 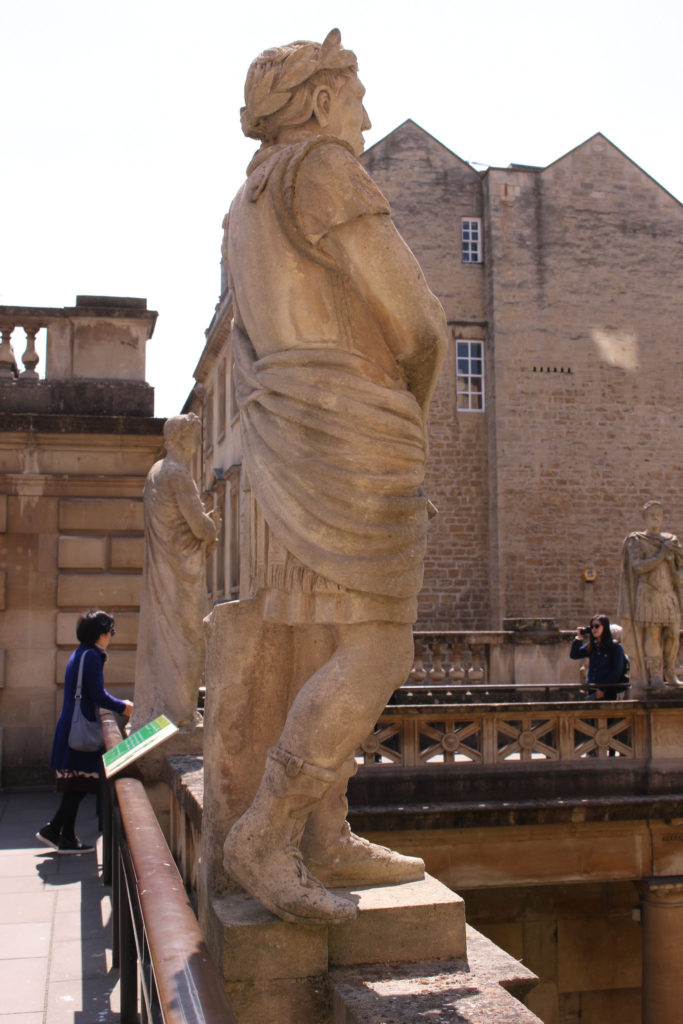 There were several groups of school children there. They were VERY well behaved. 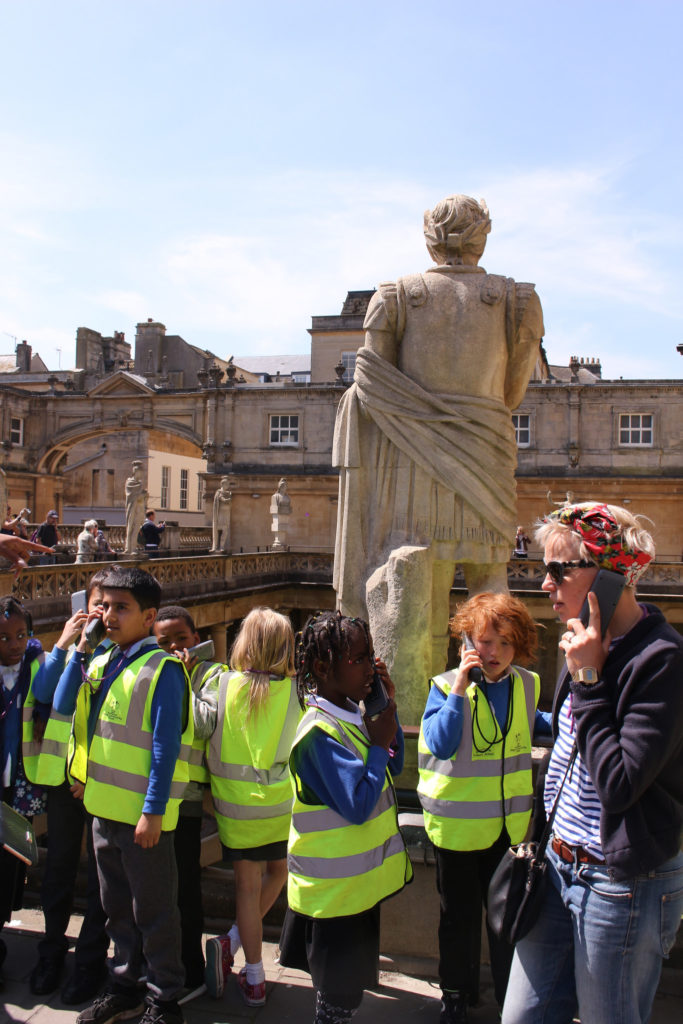 Looking down at the baths from above, where you enter. The baths are below street level. 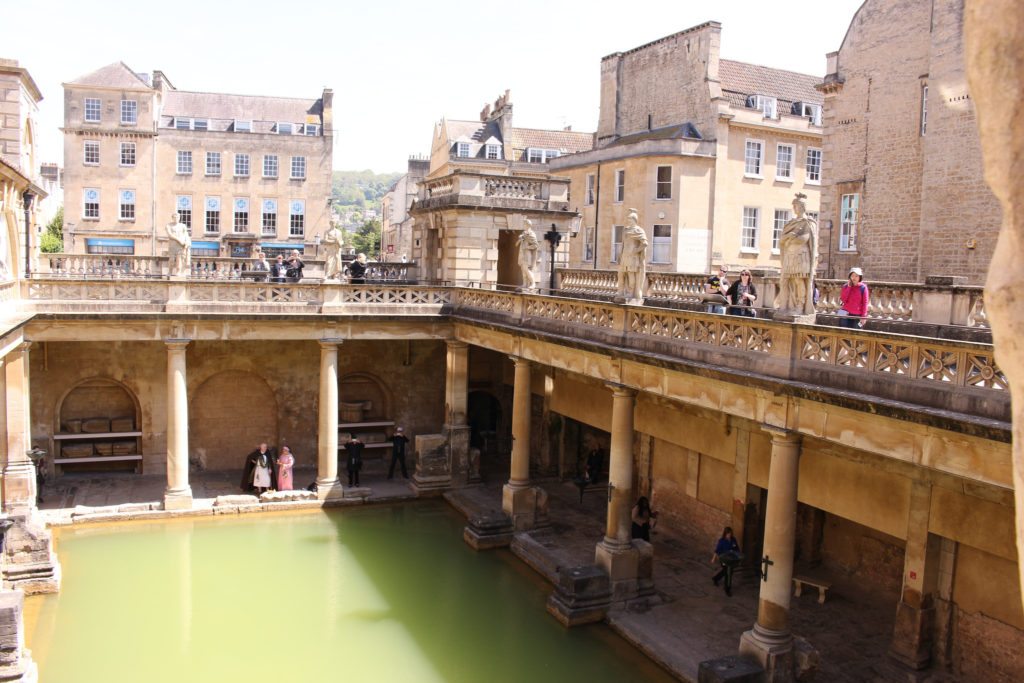 That’s the Bath Abbey in the background – the Roman Baths are right beside the Abbey. 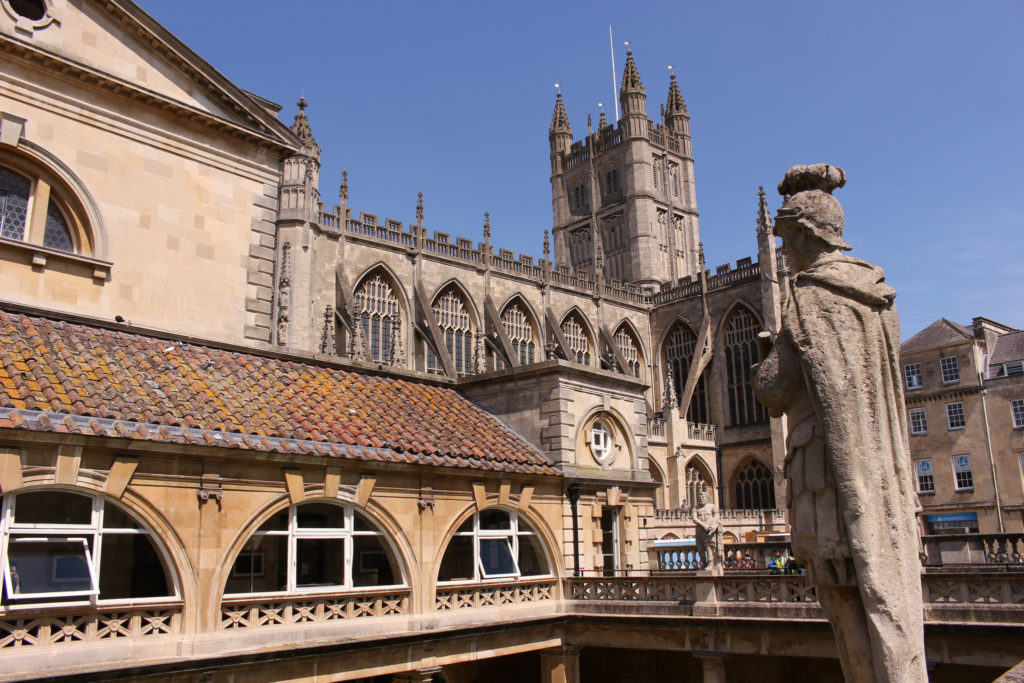 There were several people around dressed as Roman-era citizens. They do give tours but we just did the basic self-guided tour. 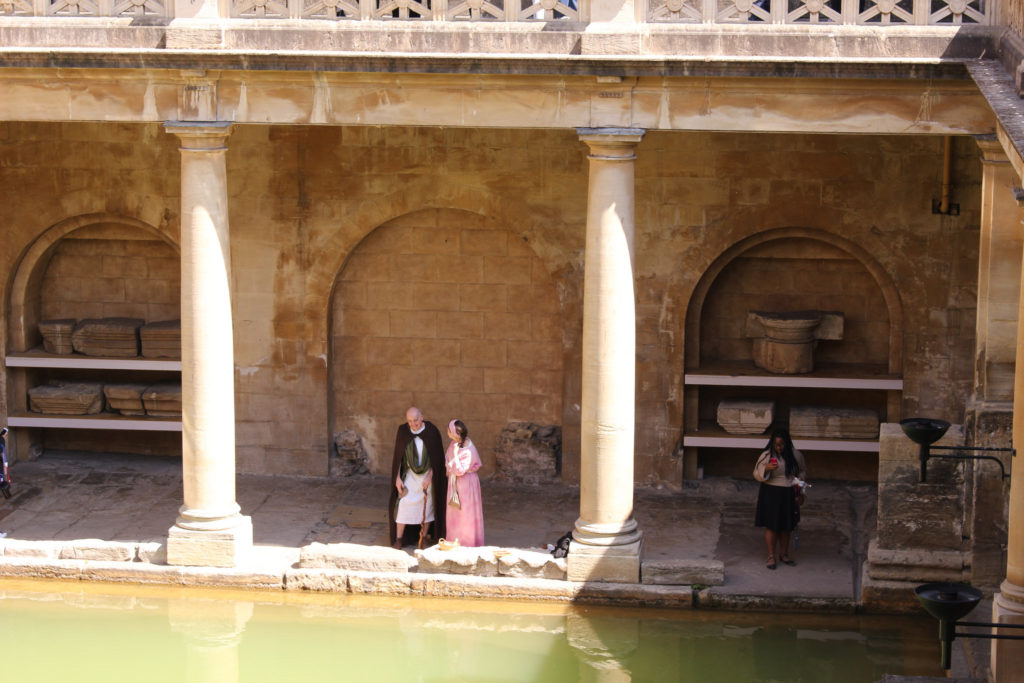 I added this because it’s the Bath Aqua Glass shop, which I love beyond all reason. We discovered it on our very first trip, in 2010, and every time we go to Bath I have to buy something here. They have the most gorgeous glass, and the blue glass gets its color from minerals found in the Bath area. I have gotten earrings every time I’ve gone, and last time I also got a couple of sun catchers and a little glass cat for my mother-in-law. I had those mailed to me for a ridiculously reasonable price, and if I’m not mistaken I didn’t have to pay VAT for what I had mailed. They are also really reasonably priced for handmade stuff. SO I was thrilled to see it from this angle and had to take a picture! Not sure what the barriers are for, though.

(lol, AGES later I am actually looking at this, and….it is not the Bath Aqua Glass shop. At all. Looks like it’s a tourist information center. I have a real picture of the shop next entry, but check out the link anyhow) 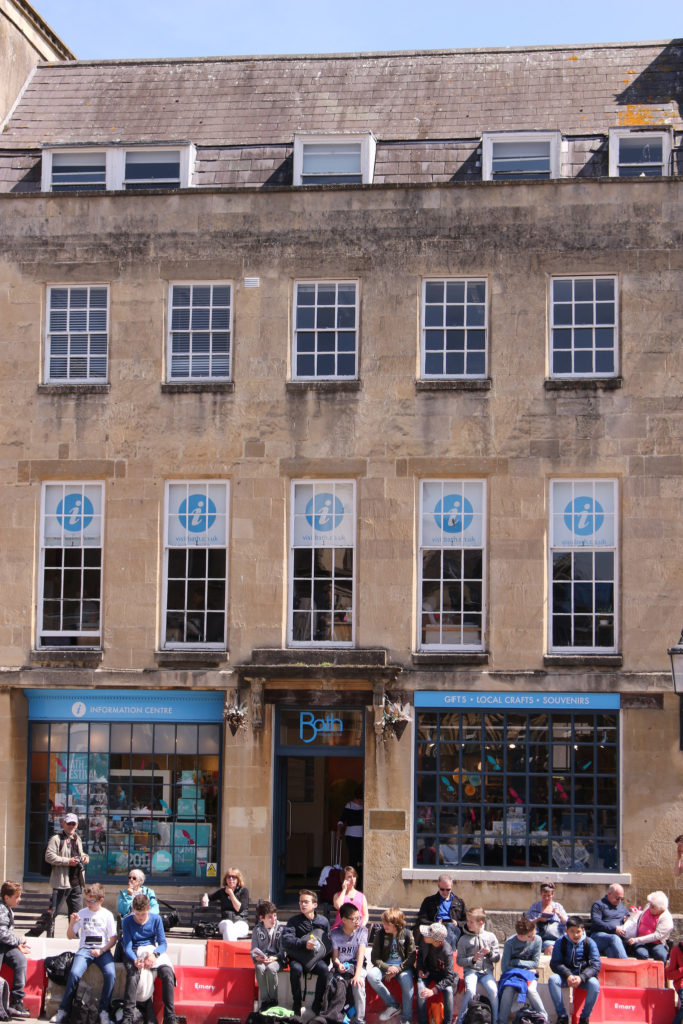 Finally Kim was done with her card company, and we went down to the museum part. The museum was really interesting, although it did seem a little simplistic. Still, I didn’t know much at all about the Roman era, so it was quite educational. 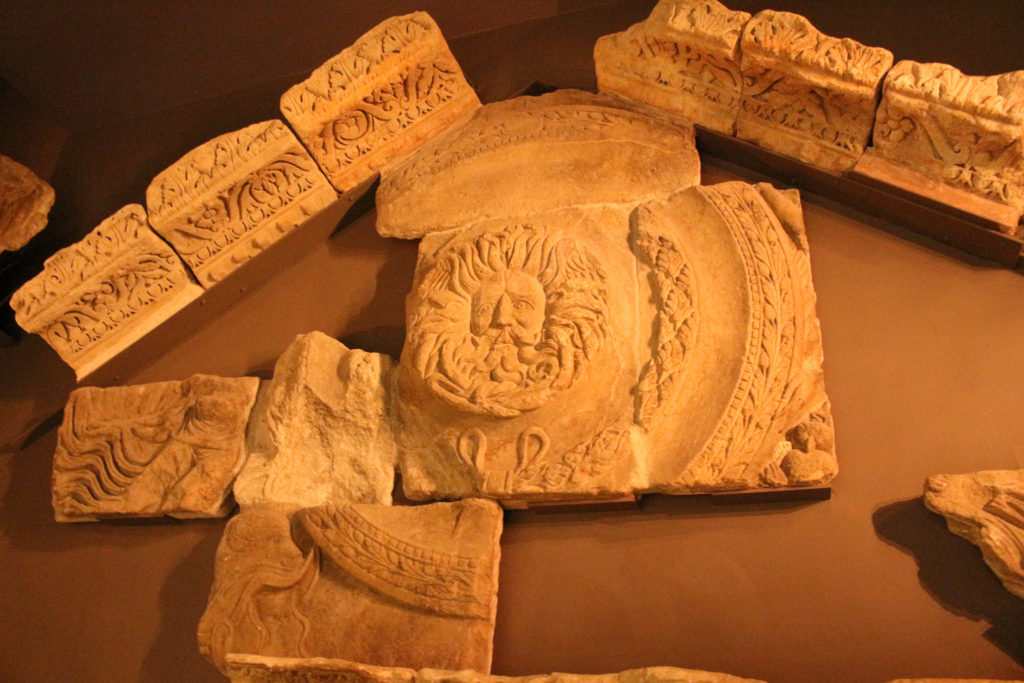 This was a kind of alarming view of what a reconstructed Roman may have looked like. 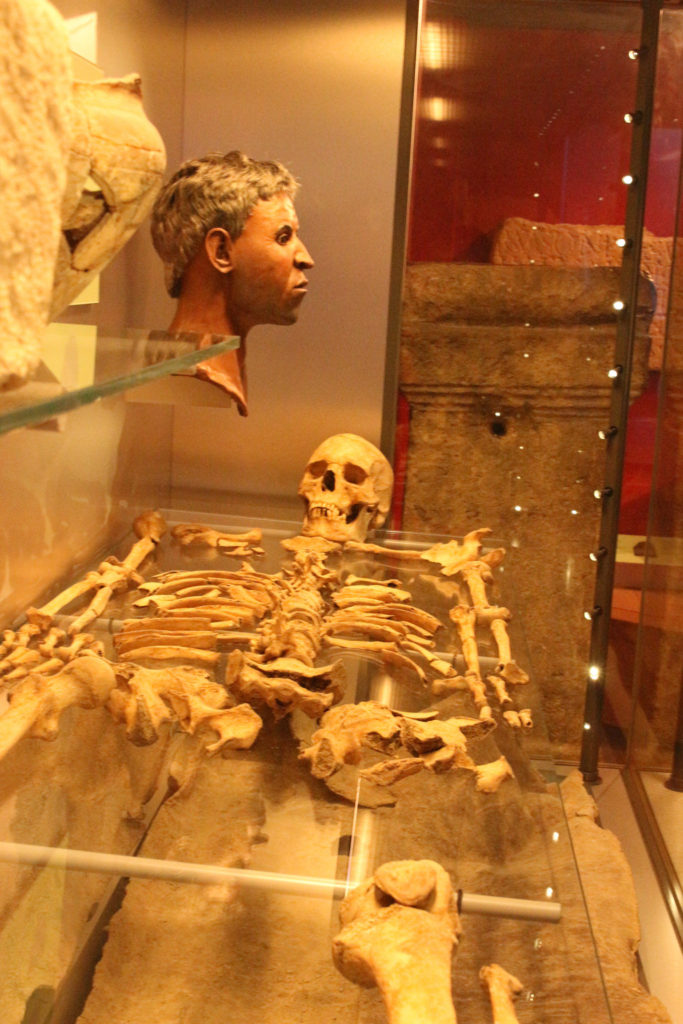 Mosaic tiles from the baths: 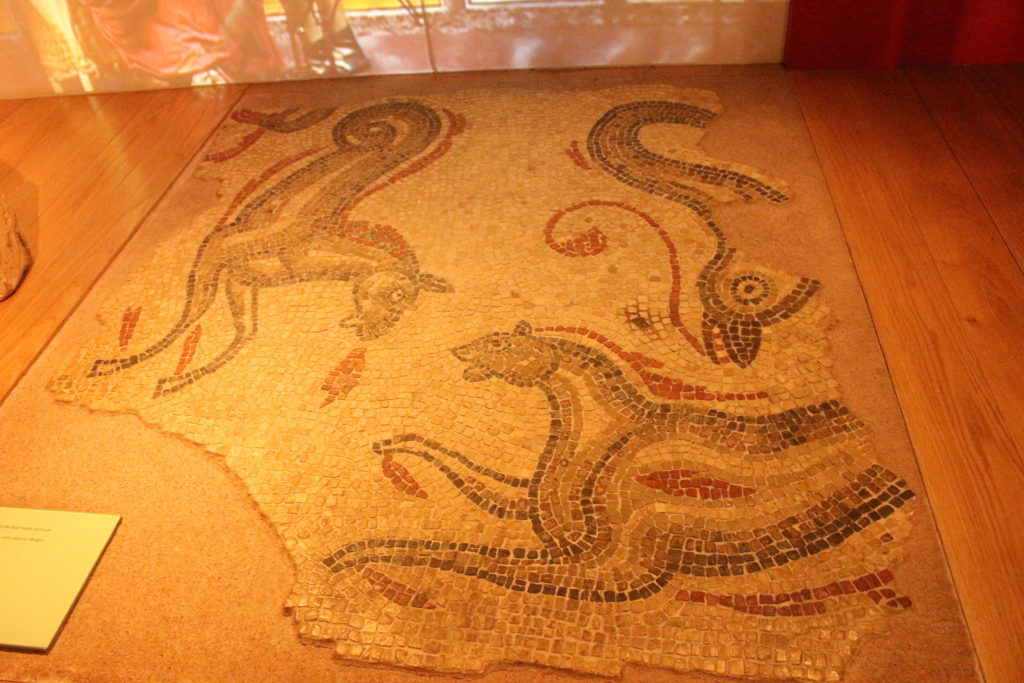 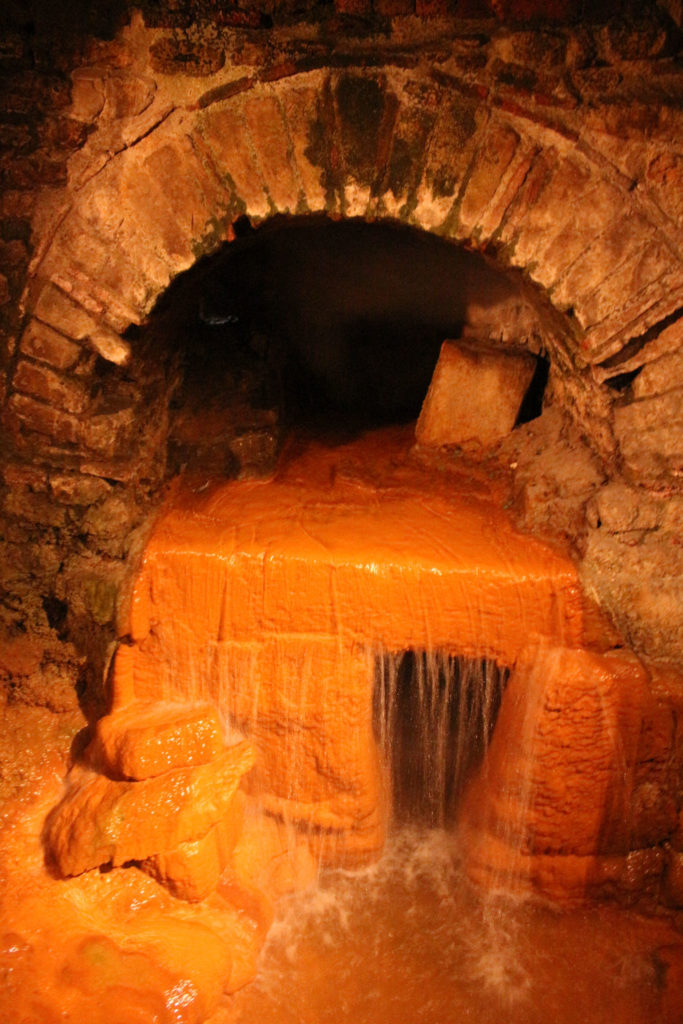 The sauna area was very interesting. You can see how the blocks were stacked to let the steam through the rooms. 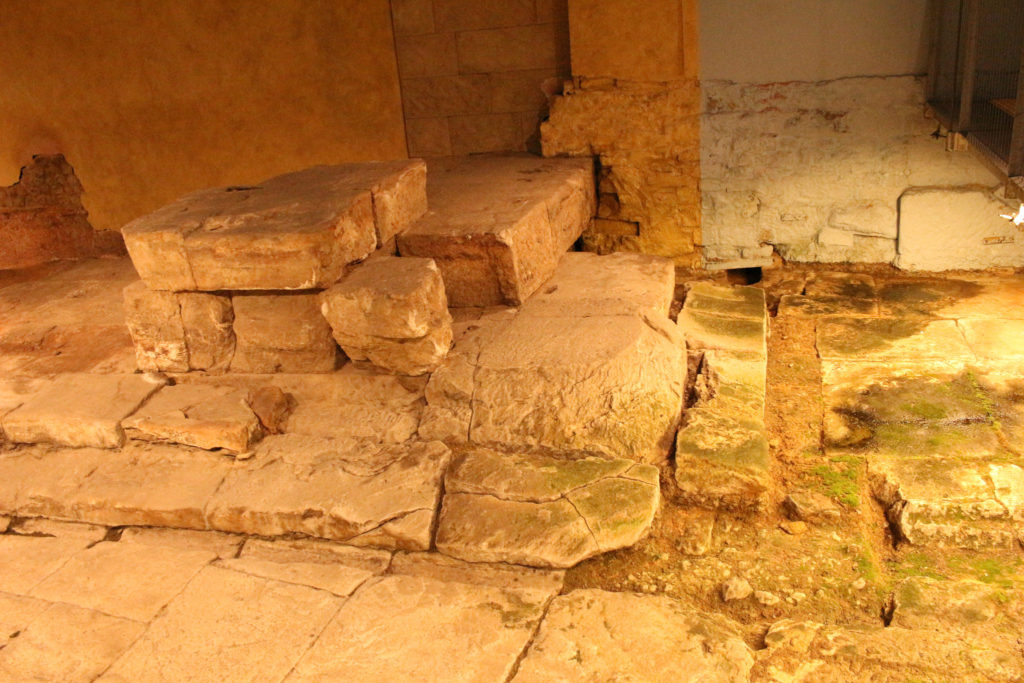 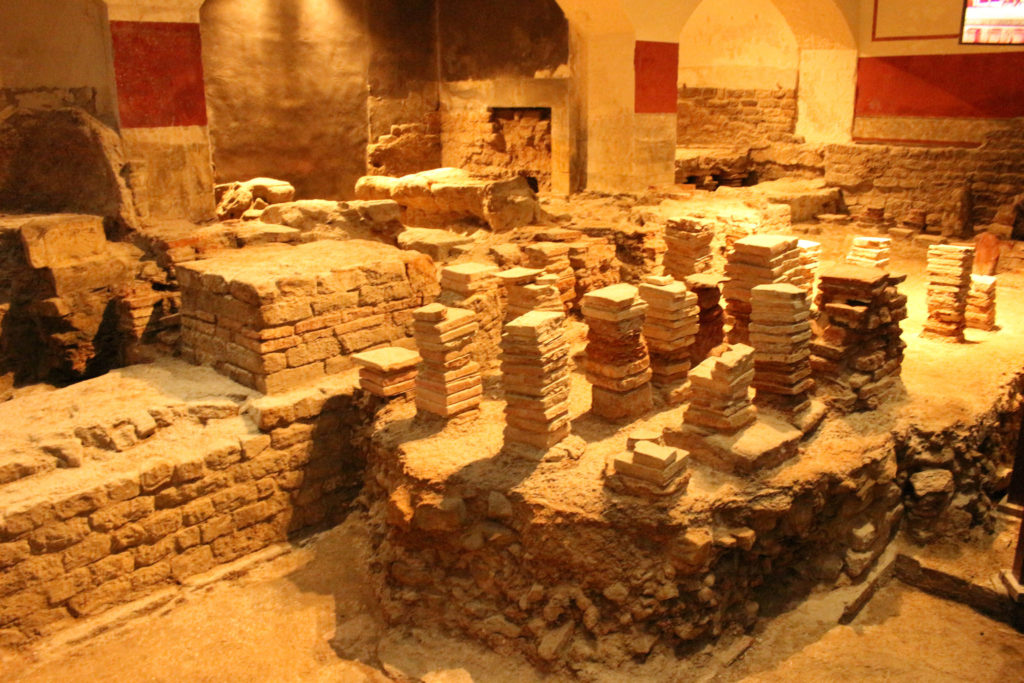 They had these odd …. shows? Demonstrations, I guess – with projections of Roman-era people working and being leisurely in the baths. 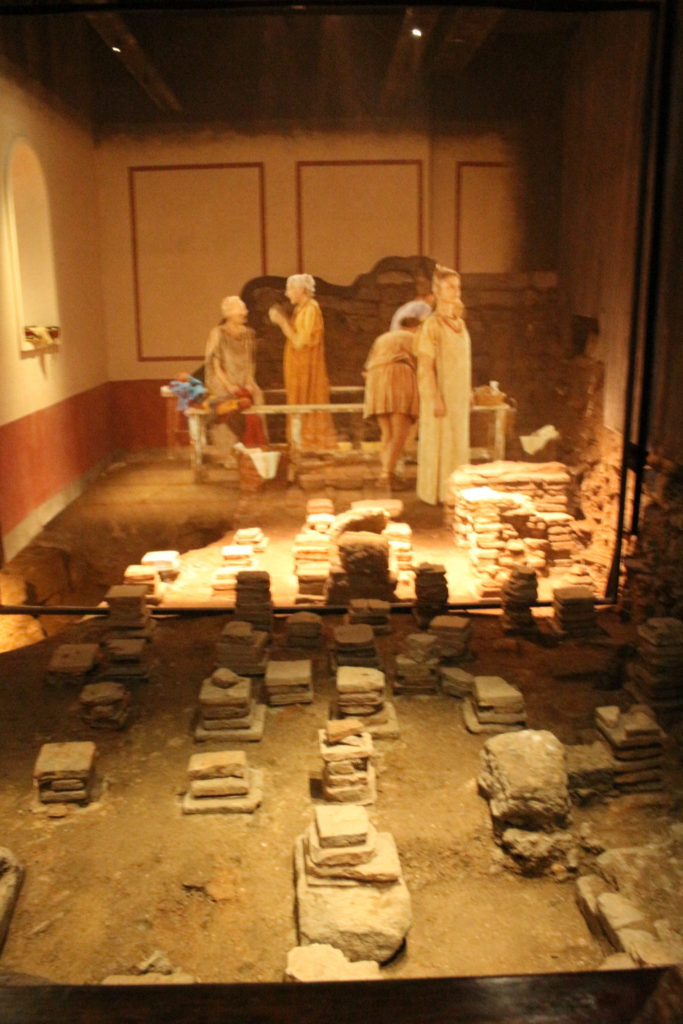 These were actual “notes” left regarding wrongdoings — I think that people would throw them into the baths in the hopes that the gods would avenge them. There’s one several photos down with a closer look. 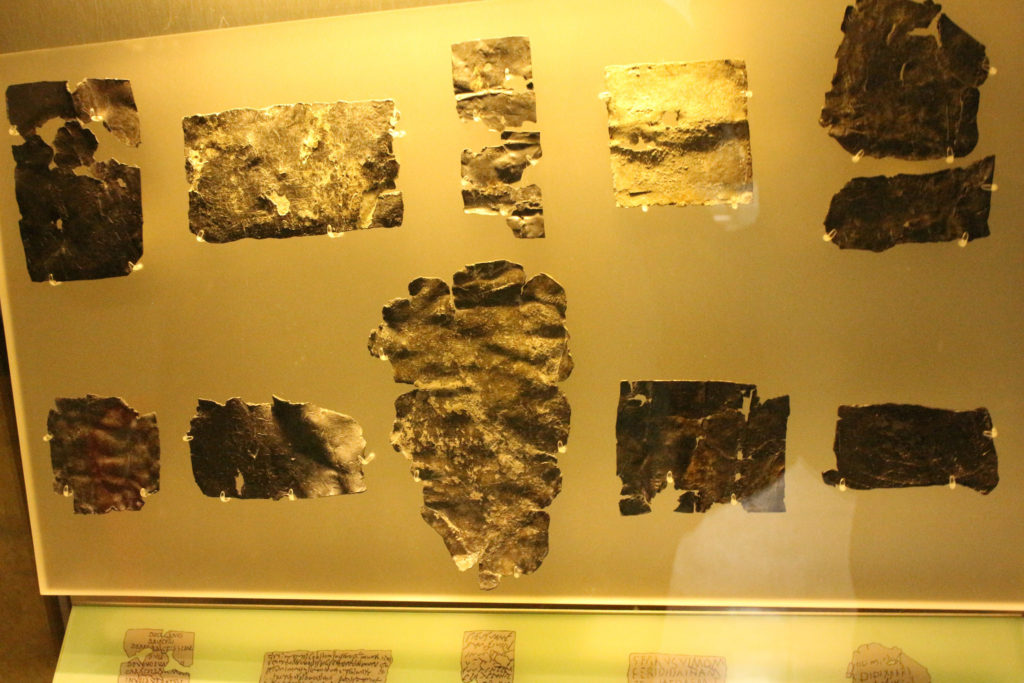 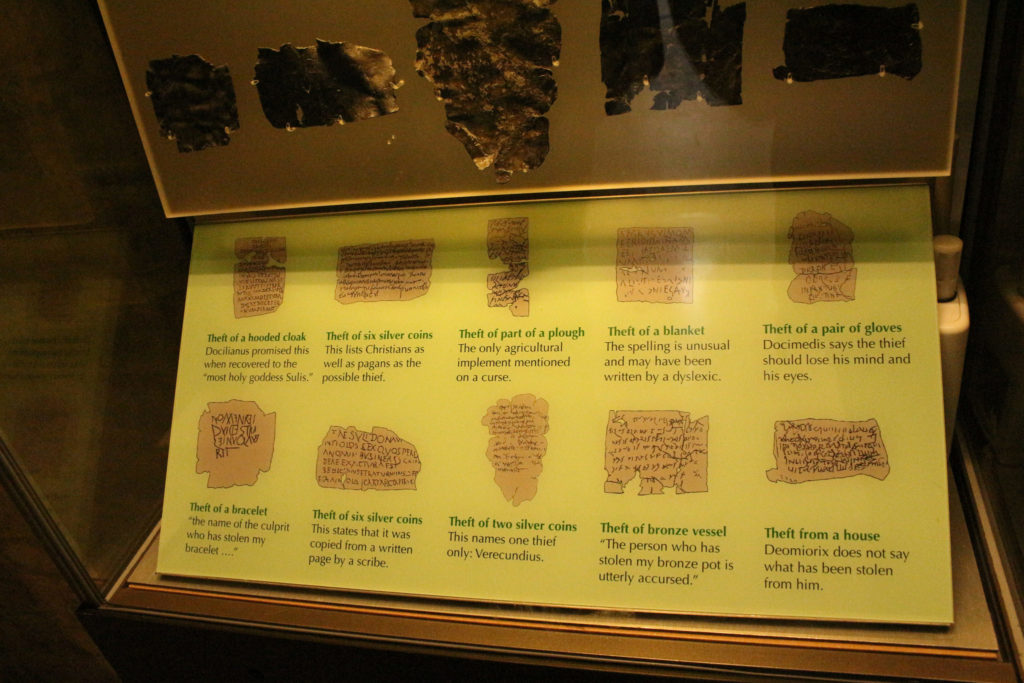 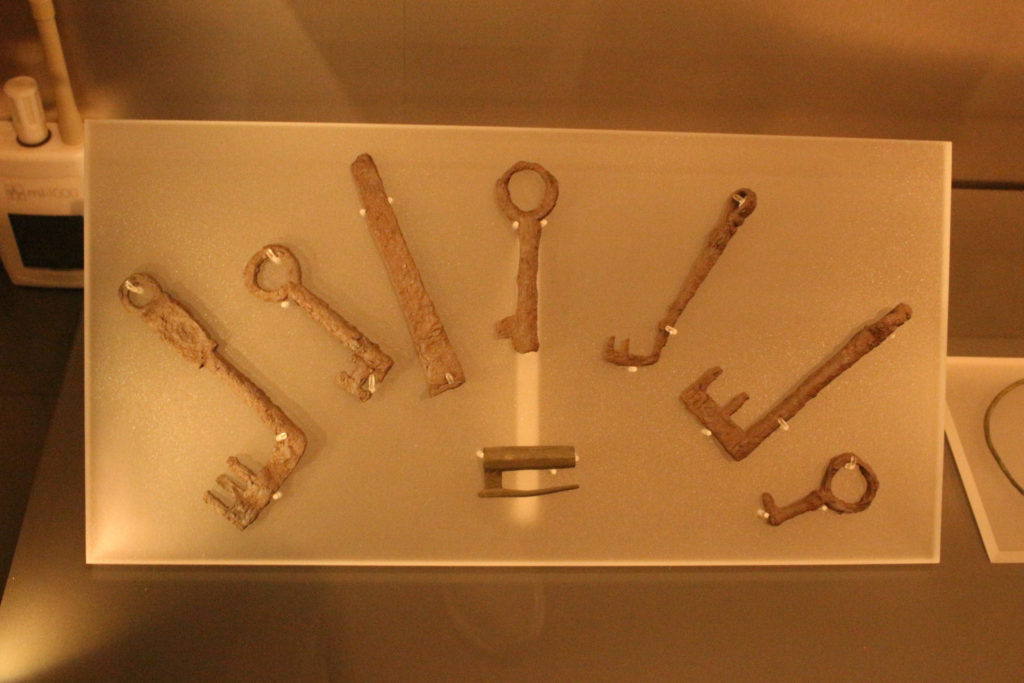 The bronze head of the goddess Sulis Minerva – one of the best-known objects from Roman times in Britain. It’s possibly from the first century AD, when there was a temple and sacred springs on the site. 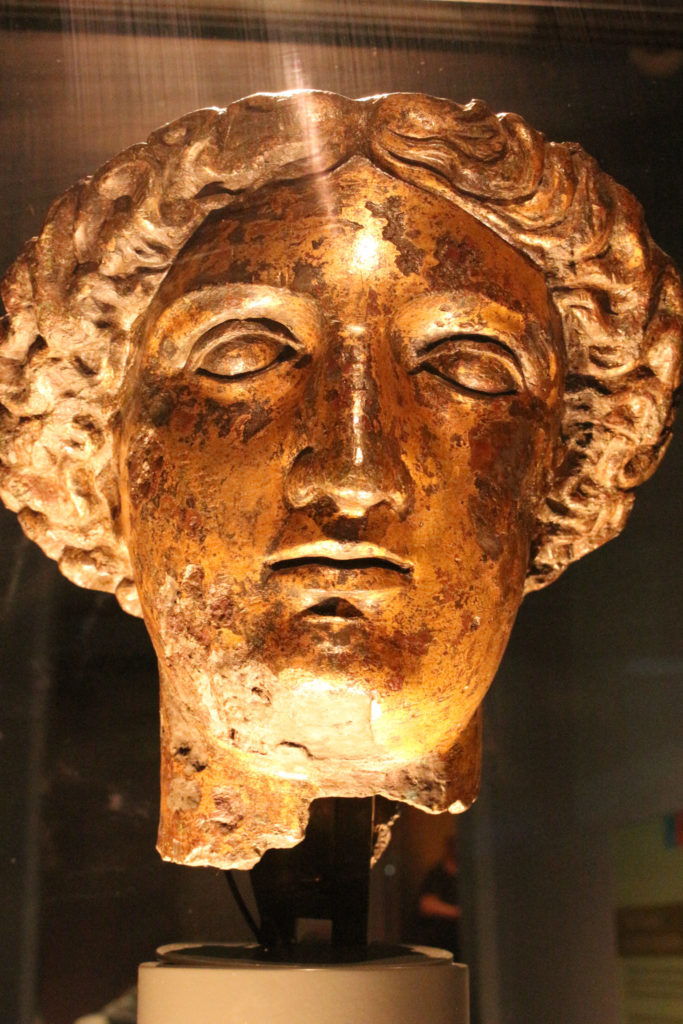 Closer look at the writing. I think this may have been the one that archaeologists believed was written by someone with dyslexia. 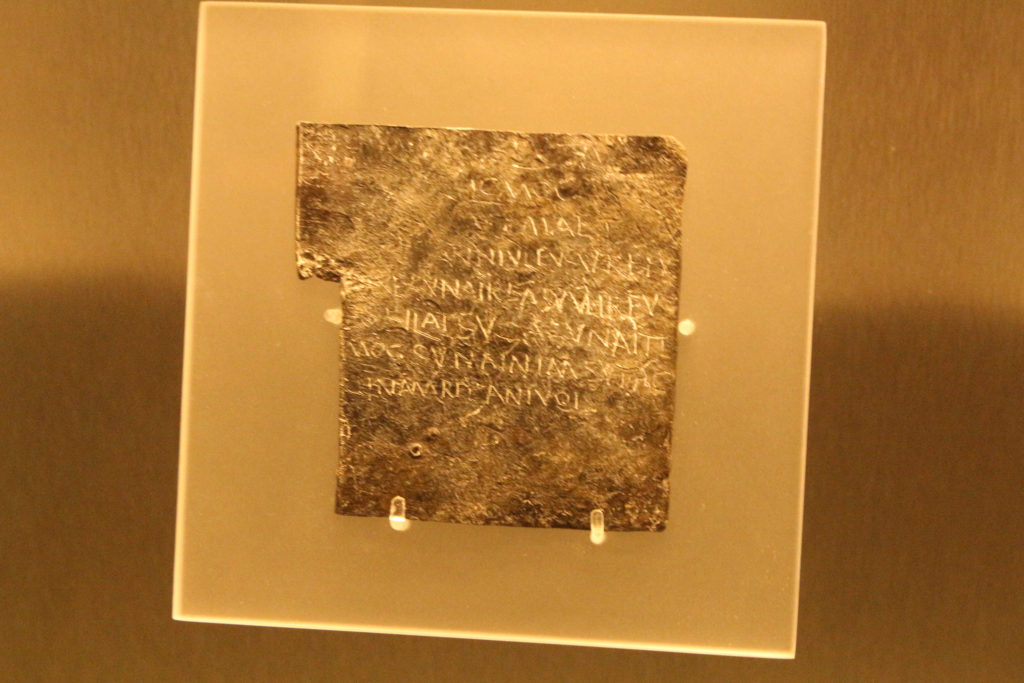 We sat for awhile by the water. I was dying to put my feet in, but it was forbidden. 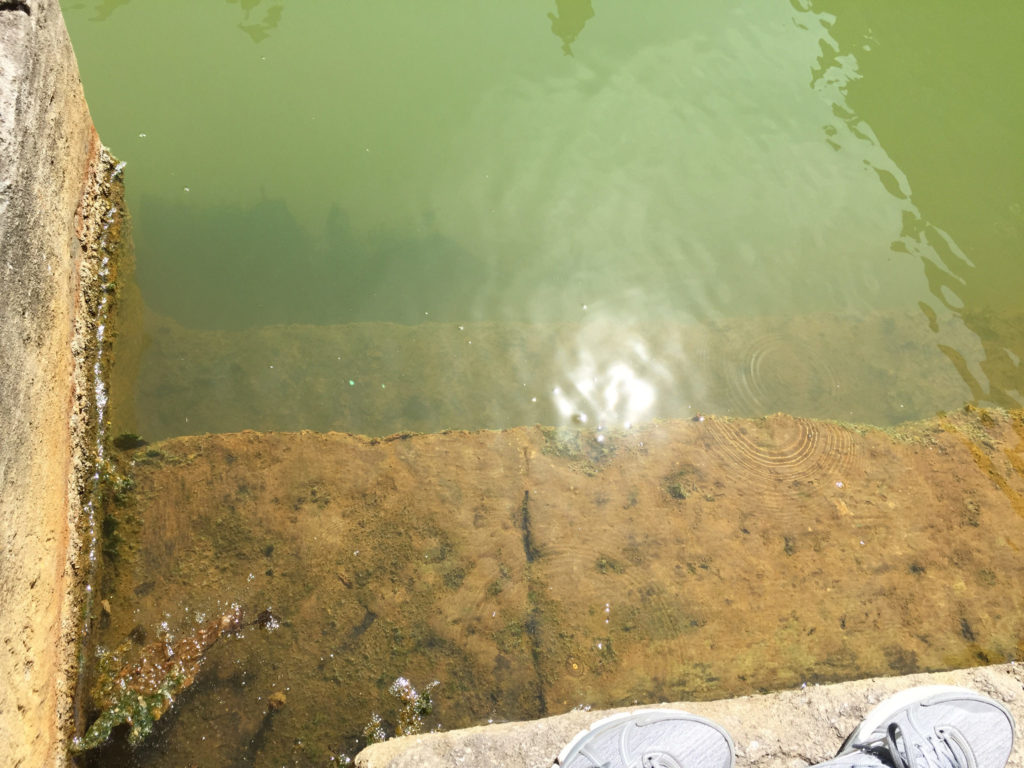 The Plunge Pool, full of coins: 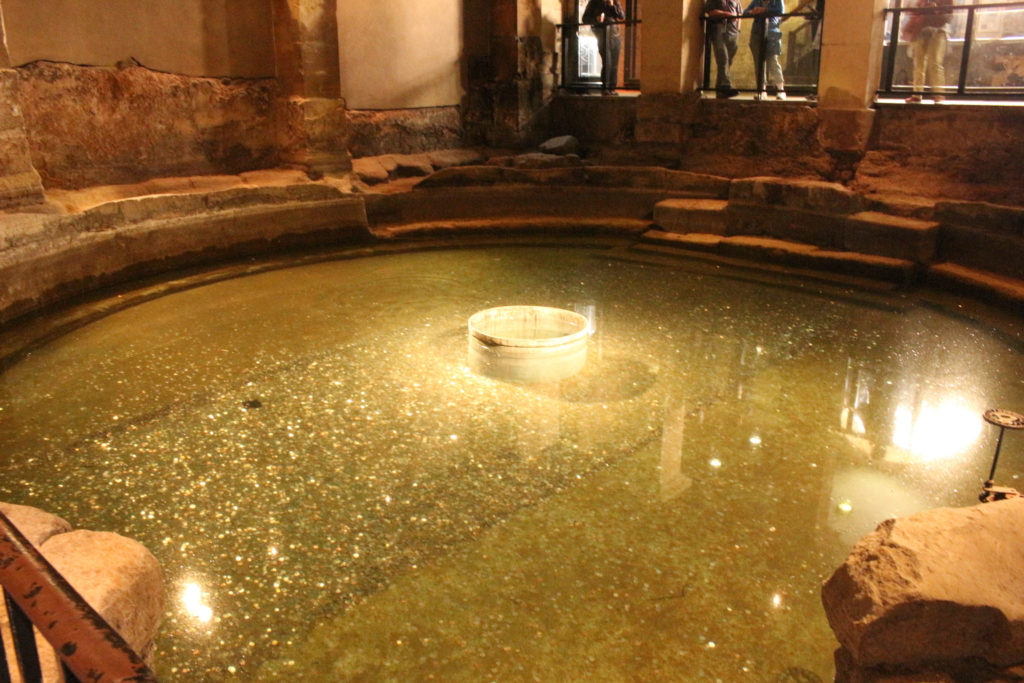 One of the Roman era actors: 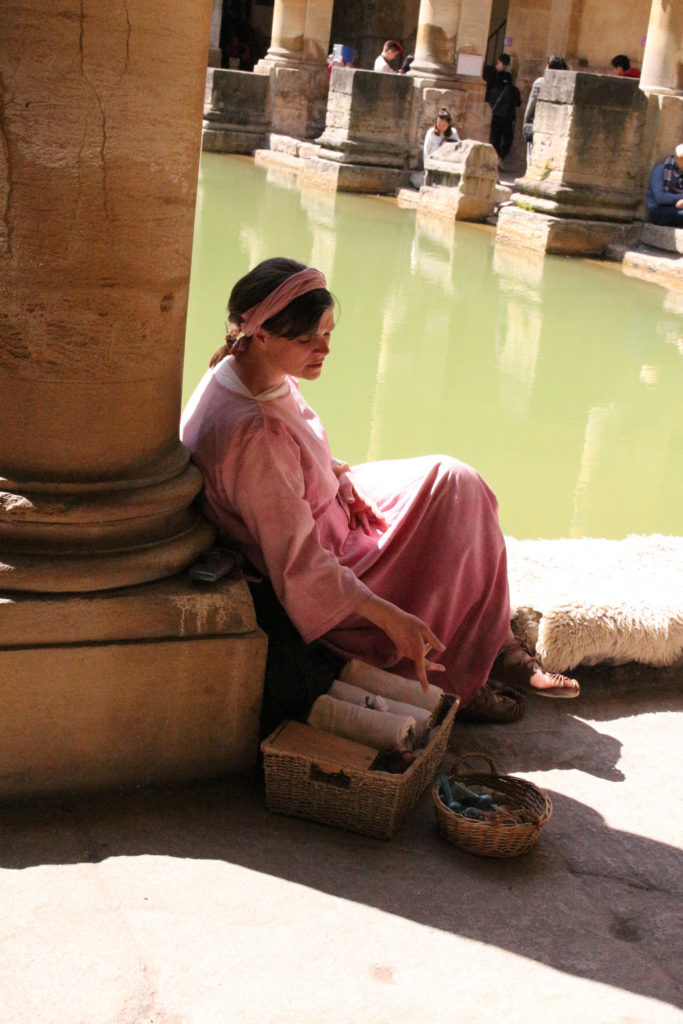 Reflections in the bath, and a bunch of downstairs views: 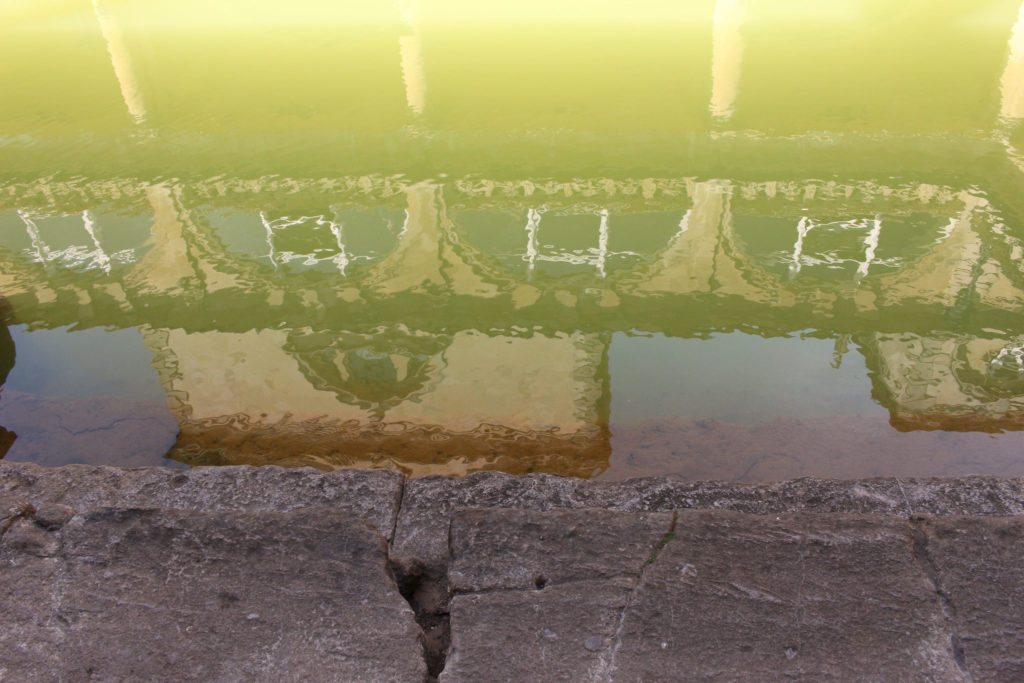 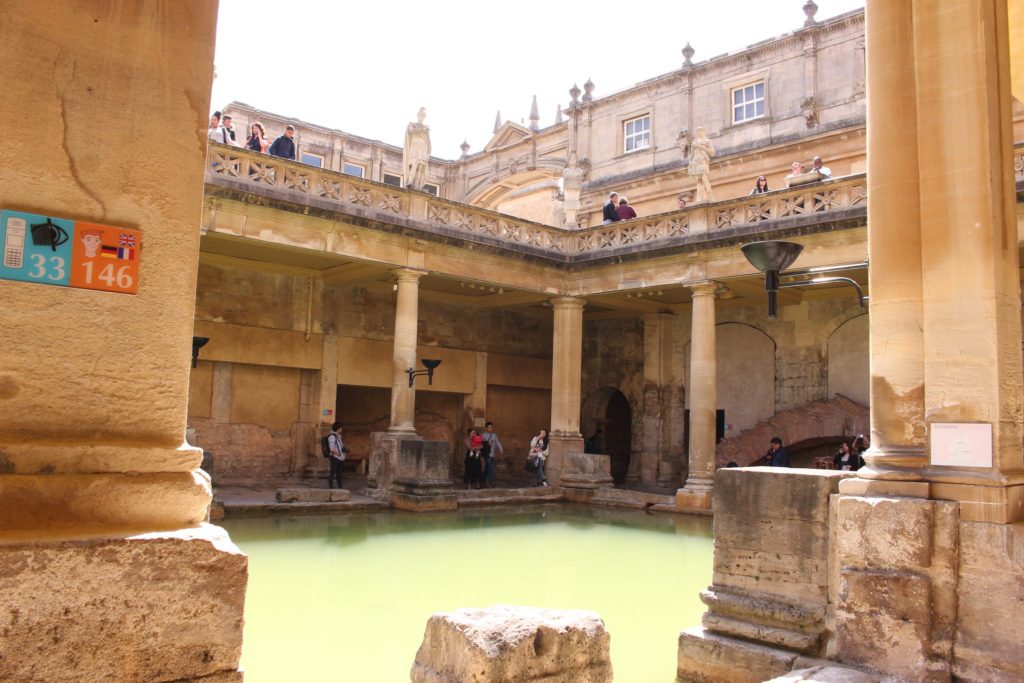 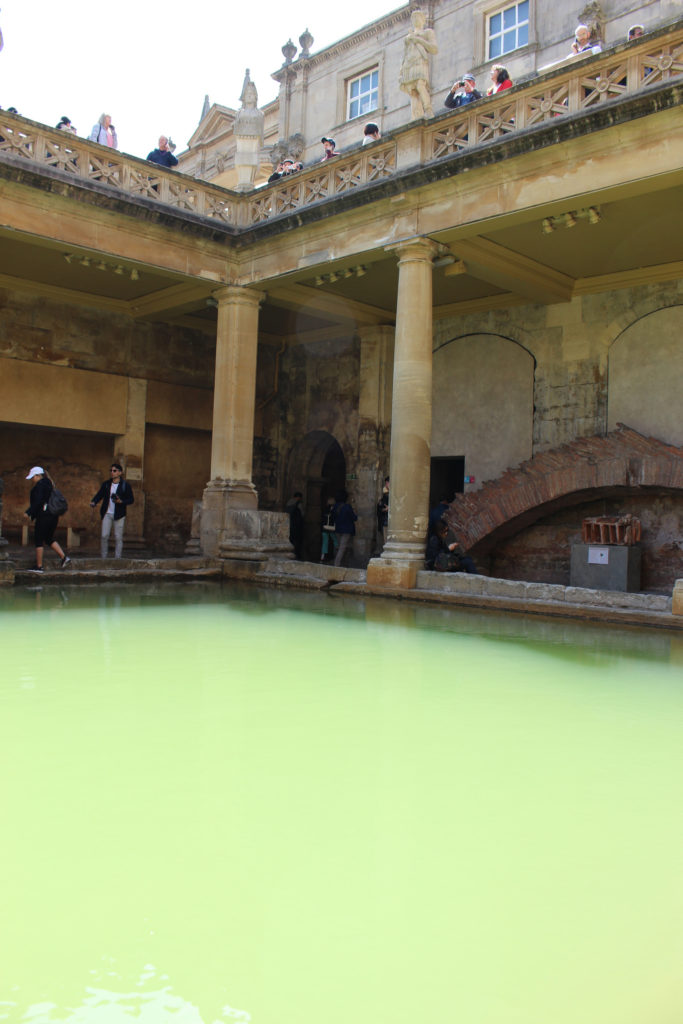 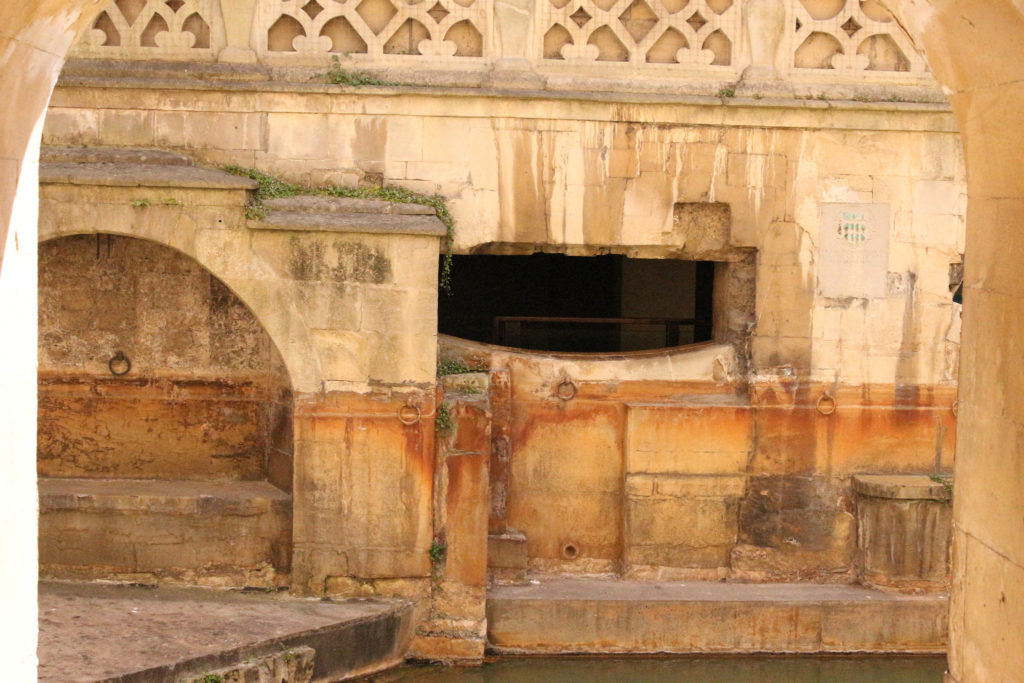 And us, being tourists! I don’t know why I have such a weird look on my face, but at least you can see my eyes which is usually not the case. 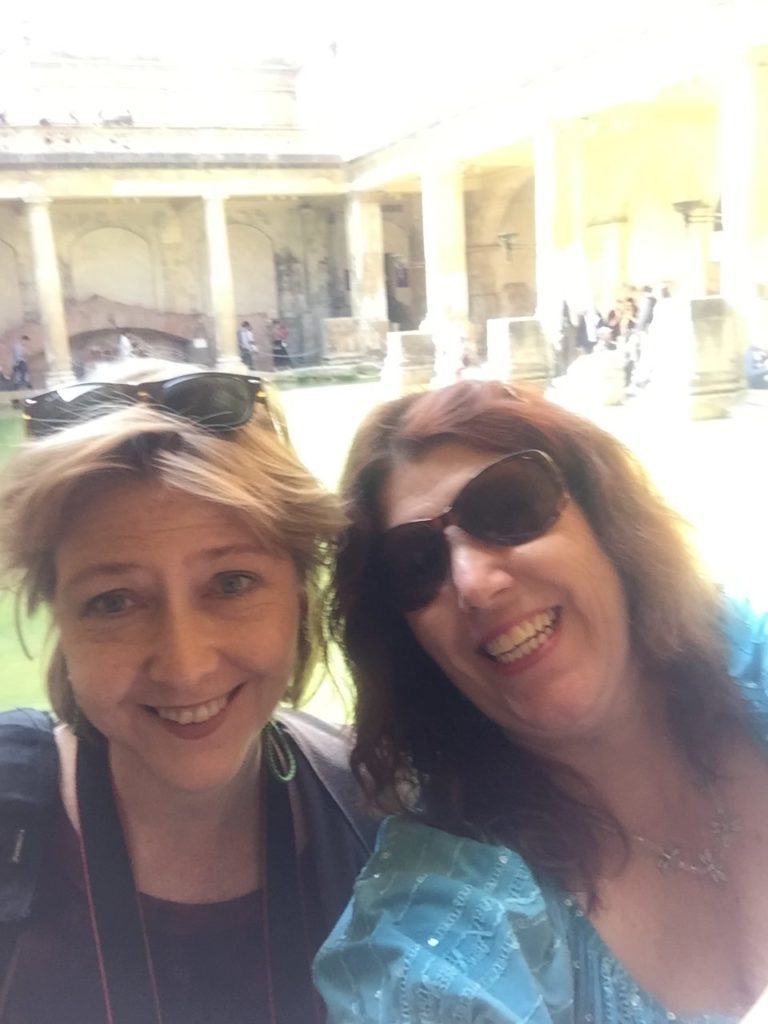 AND I think I’ll get one more Bath entry in, then move onward….

Credit card companys can be such boffes!

You look great. Tired, but great!