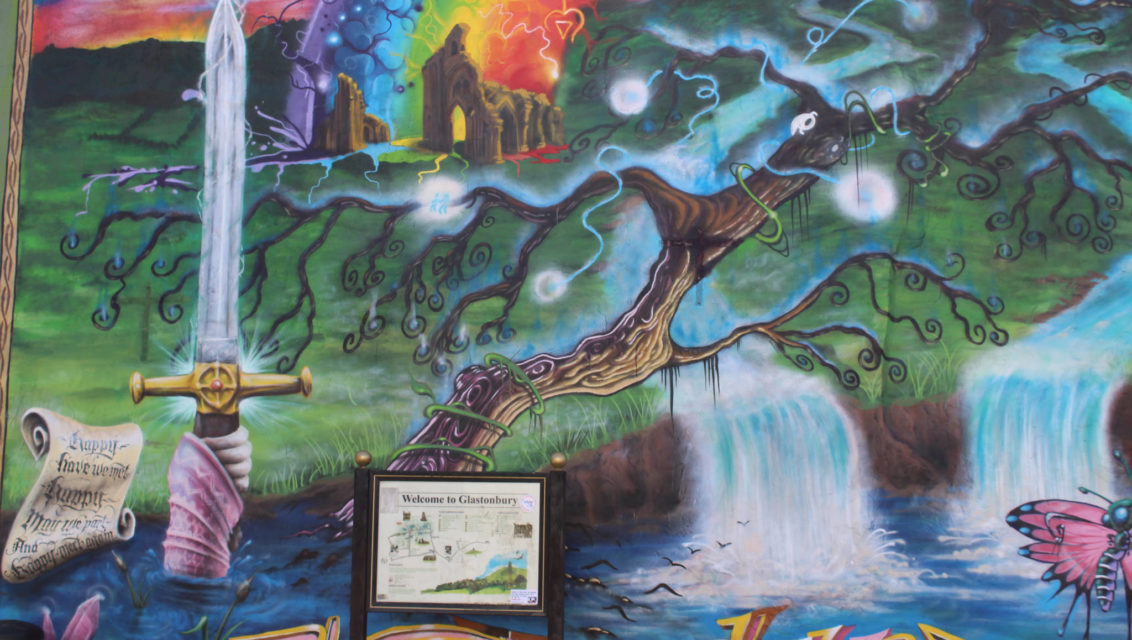 The first time Kim and I went to England, in 2010, we kind of skirted Glastonbury – we went to the Glastonbury Tor, but somehow managed not to see anything at all of the town itself. That was the trip where we thought we could see Bath, Stonehenge, Avebury, Glastonbury, a bunch of white horses, etc etc etc in a day. Hahahahaha!!! But ever since we went, I’ve wanted to go back and see the town, and the ruins of the Glastonbury Abbey.

Glastonbury is a total hippy town. It is full of New Agers, has a huge King Arthur connection/attraction and is all magical and mysterious and fun. And, amusingly, it is VERY like Asheville NC, where Kim and I both grew up – Asheville (AKA Beer City for all its many breweries) is a hippy-filled New Age artsy town too now, to the disgust of many original locals.  Not to me, I LOVE Asheville. And I love Glastonbury too. Seriously, they could be twins, except Asheville is a lot bigger and doesn’t have the Tor or the ruined Abbey. And Glastonbury doesn’t have as many breweries. 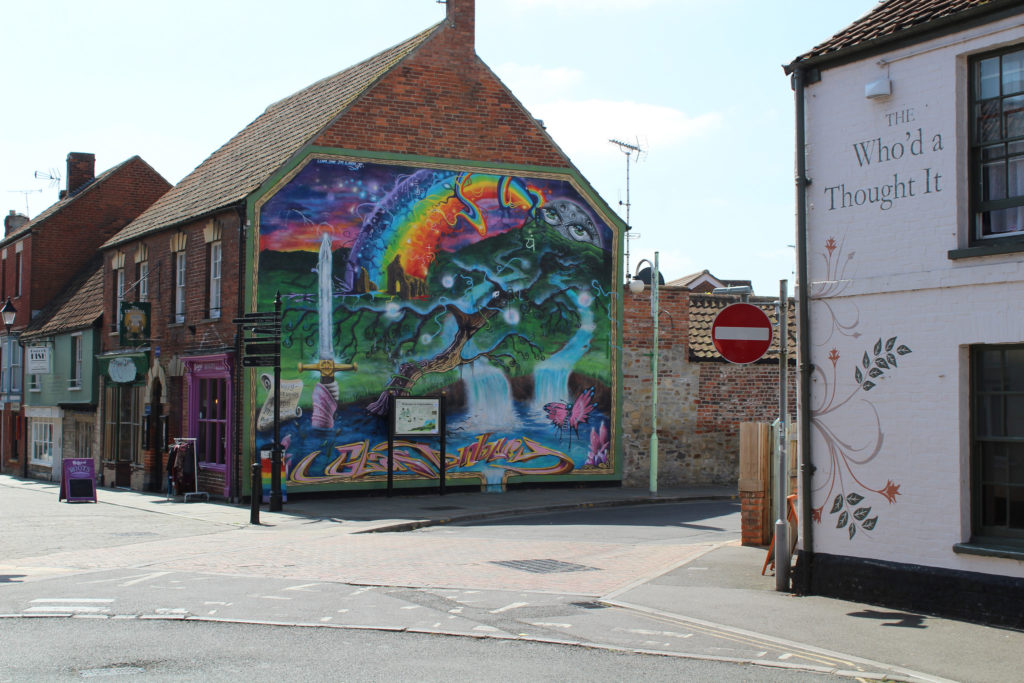 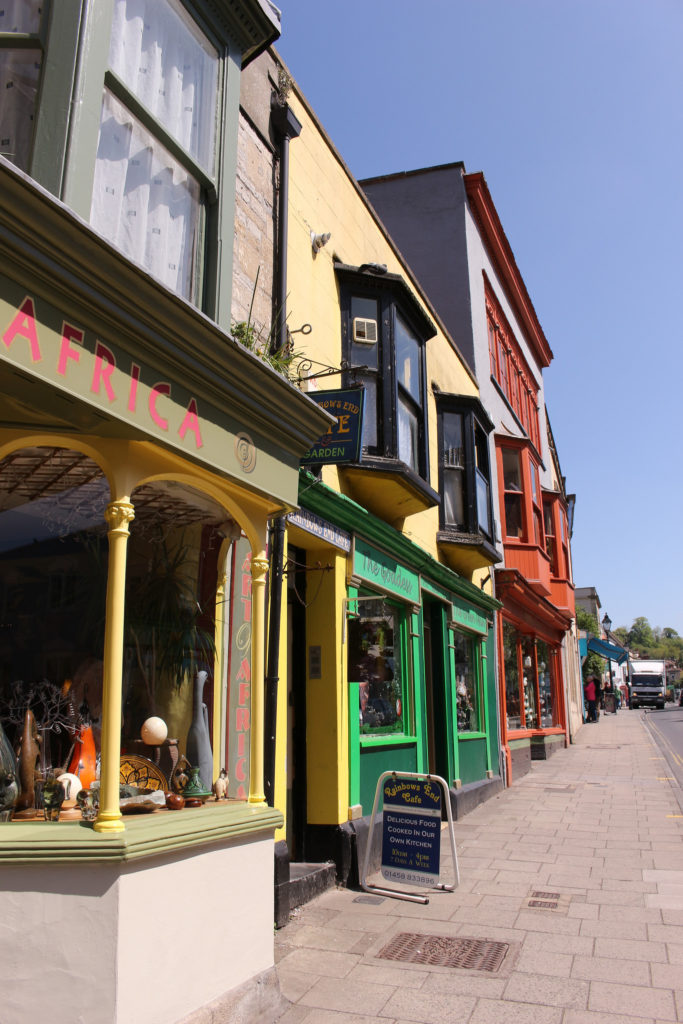 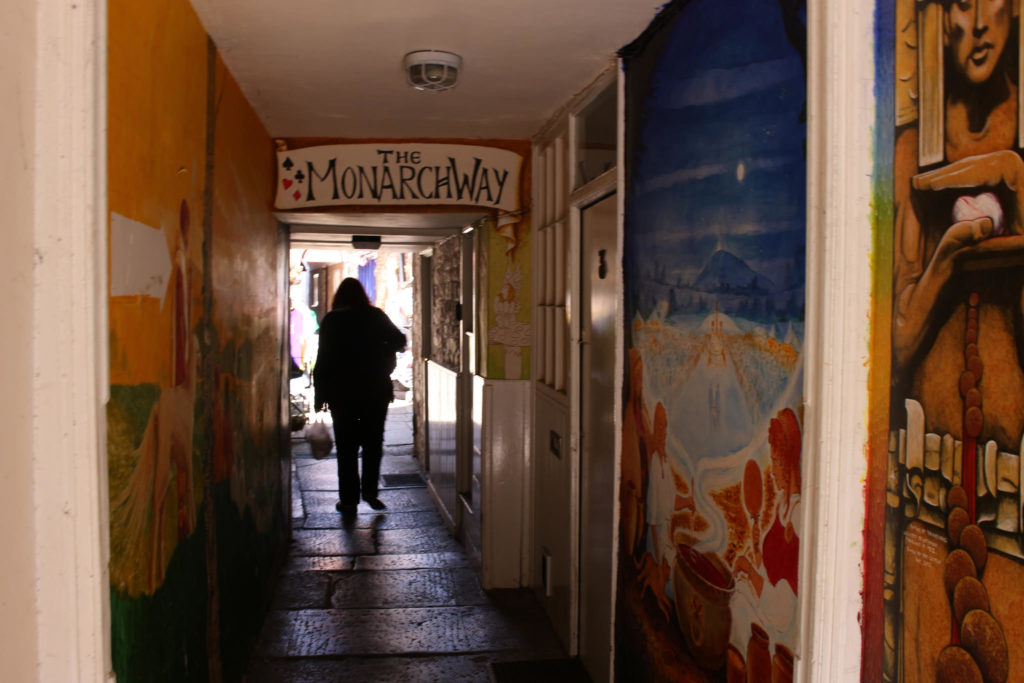 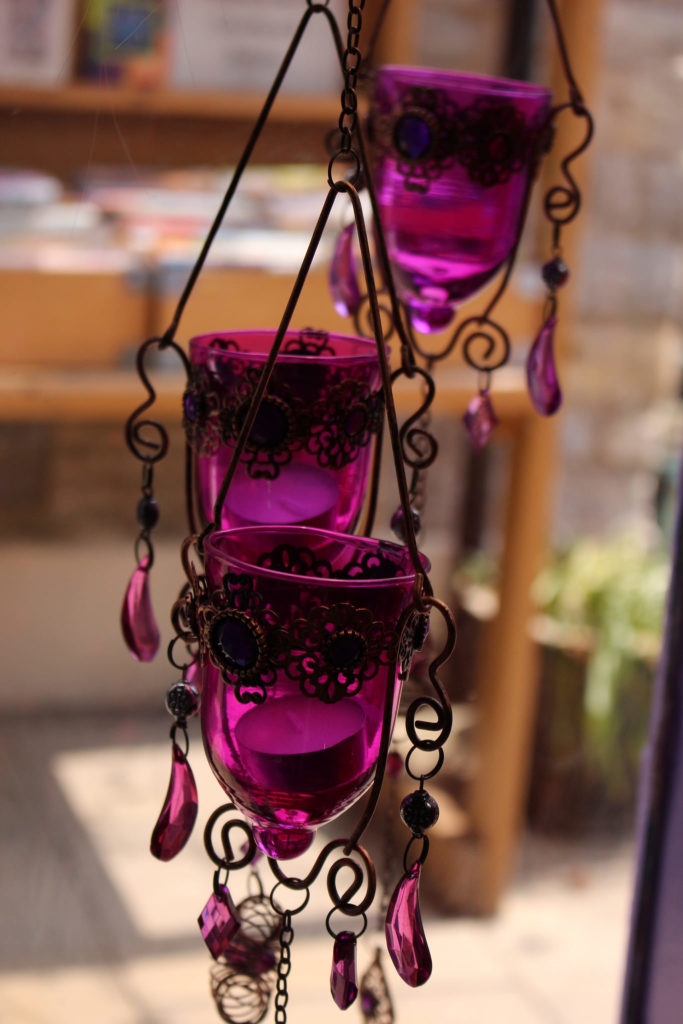 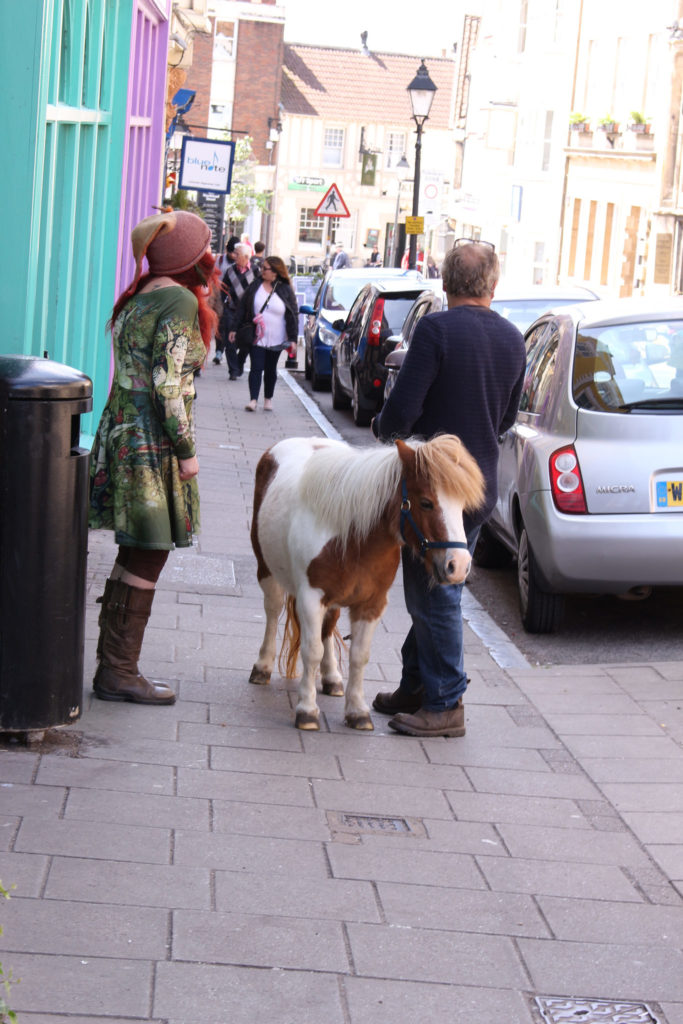 And didgeridoo players. If I didn’t know the next picture was from Glastonbury, I would swear it was Asheville. 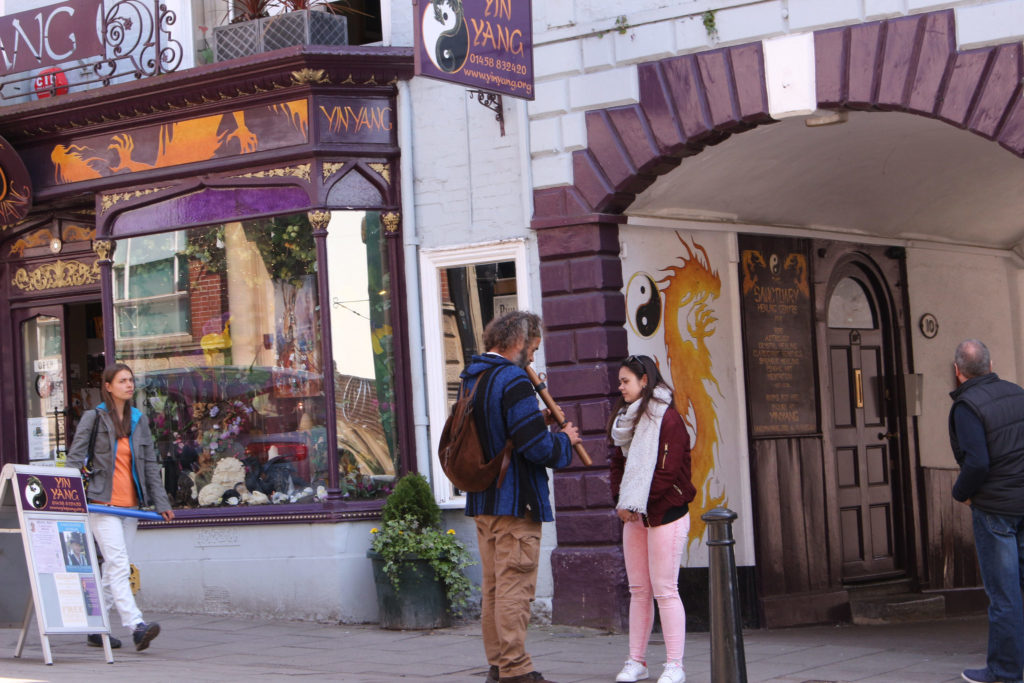 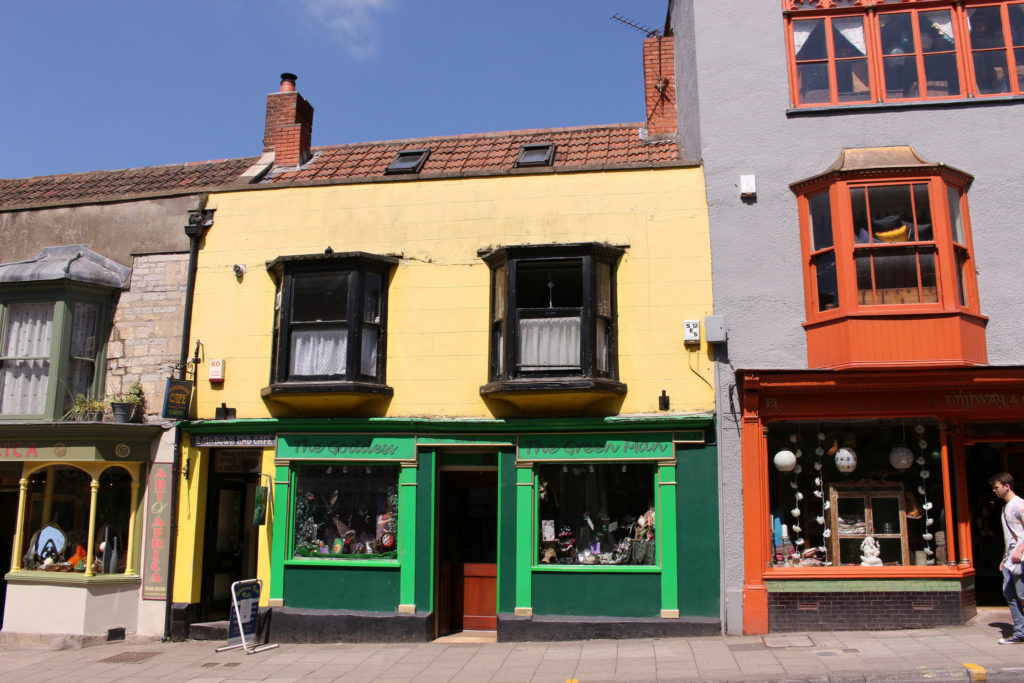 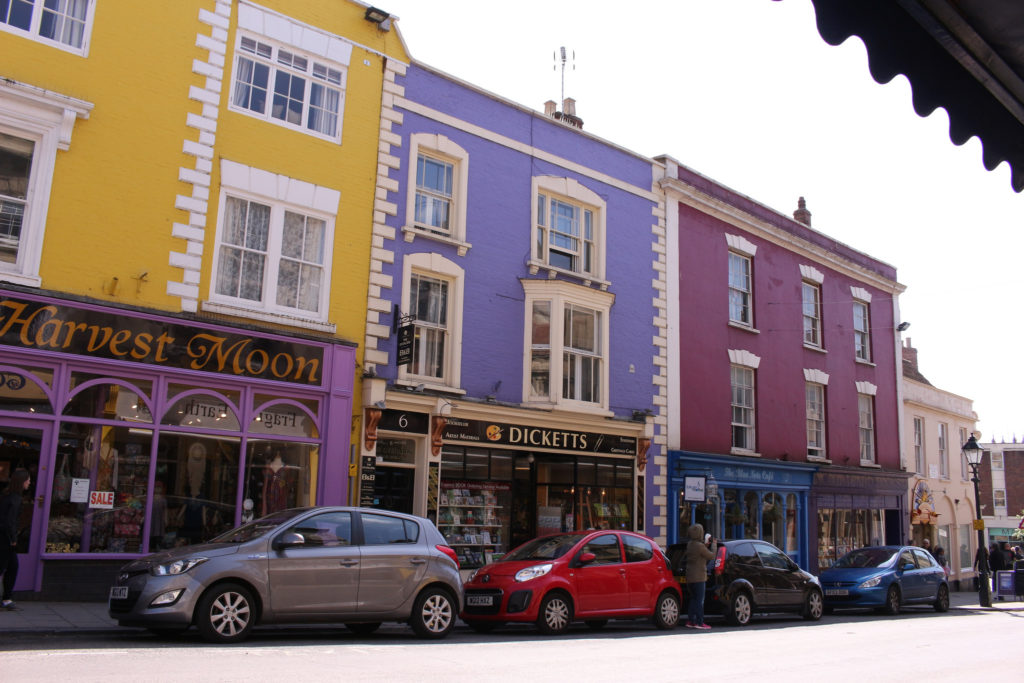 Kim is addicted to everything fairy/angel/new-agey/magical etc etc etc, and we had to go into every. single. fairy. shop. And there are A LOT OF FAIRY SHOPS in Glastonbury. Or, as I was referring to them in my head, FUCKING BLOODY FAIRY SHOPS!!! I’m fine with one or two, although 38,294 gets kind of samey. But I did not say a THING about it, at least not out loud, because Kim is one of those people who always does what everyone else wants to do, and never ever EVER speaks up for what SHE wants, so I totally encouraged her in visiting the fifty gazillion fairy shops.

The first few were fun, I admit, although I actually had to leave one due to the massive amount of incense that gave me an allergic reaction. I like new-agey stuff too, as much as I make fun of it — I love tarot, and I’ll just say right now that Kim is herself quite the talented psychic and is a tarot genius… and (I feel like I should be whispering this) has just gotten hired by a psychic phone company. To read tarot over the phone. Okay, that sounds really shady but she’s actually amazing at it and hopefully can branch out on her own – she’s been doing it for free for 30 years, so it’s about time she got a little income from it.  A very little as you would not believe the cut the company takes.

ANYHOW, one of the things Kim wanted to do, of course, was get a psychic reading. She’d actually already done some research and found one she really like the sound of, who worked out of the Yin Yang shop and was available – Jenny Ann. I declined, partly from my natural cynical skepticism, and partly because I’d rather spend my money on stuff like jewelry and the jewelry supplies — stones!!! — I got at one of the many shops we visited – so while Kim went and had her reading I walked around some more by myself. Alone time!

Then I, ummmm…. ended up going and getting a reading too. Kim was totally bowled over by Jenny Ann, who appeared to know all kinds of stuff about Kim and her family – especially her dad — that should not be possible. And she wasn’t THAT pricey, as psychics go – I think it was $30 for half an hour. Okay, that’s pretty pricey, but that’s like the second time I’ve visited a psychic (at least one who isn’t Kim – I have my own free psychic so why would I spend money on a strange one?) and suddenly it seemed like something I should do.

I’m not going into all the stuff she said, some of which I kind of felt was a bit generic, but some of it was VERY interesting. Including bringing up one very specific thing she could never ever have known or even guessed, using a specific name. That was bizarre. She also said my mom, who passed away in 2009, was there with me, on this trip, and I should look out for the white feathers she would leave me.

Two days later, crossing the street in Bath, I looked down and saw a big white feather. I thought, “that’s a little odd!” but I did not pick it up because there were all these construction guys right there and .. I didn’t want to look weird! God forbid I ever look weird!!

Went around the corner… and there’s another white feather on the sidewalk right in front of me! Clearly my mom saying, “Would you pay attention???!!! Pick up the feather!!!” Of course I picked up the feather and it’s currently residing in my study. And I know, I know, there are pigeons all over the place in Bath!! But I really did not see any other feathers, especially just lying in my path waiting to be picked up. And my mom would LOVE Bath. She would actually love all of England. So I like to think she was there with us. 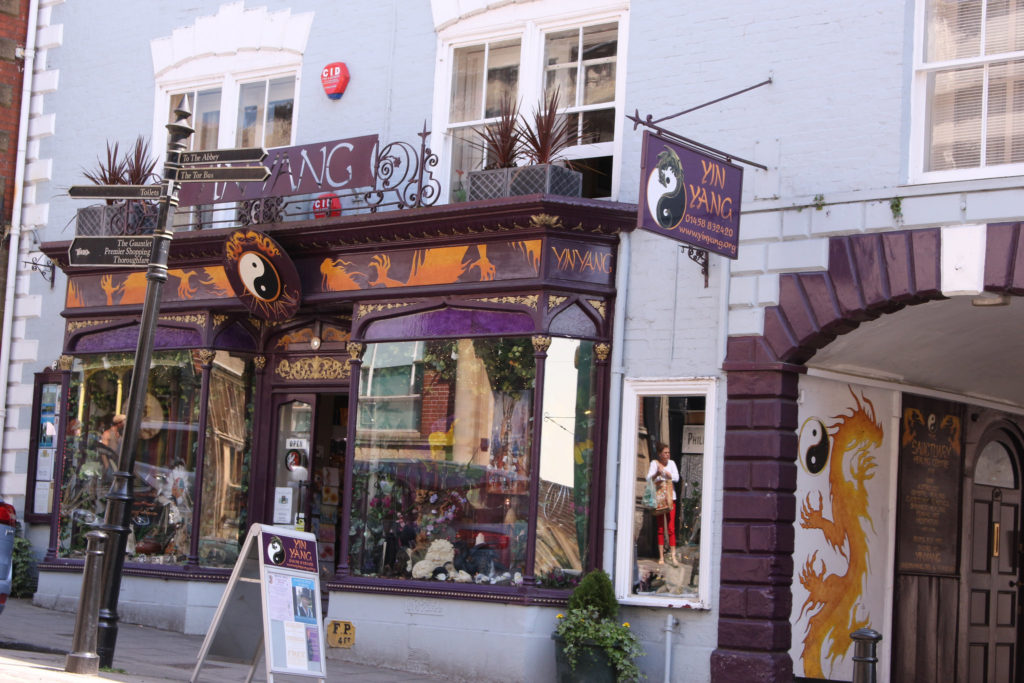 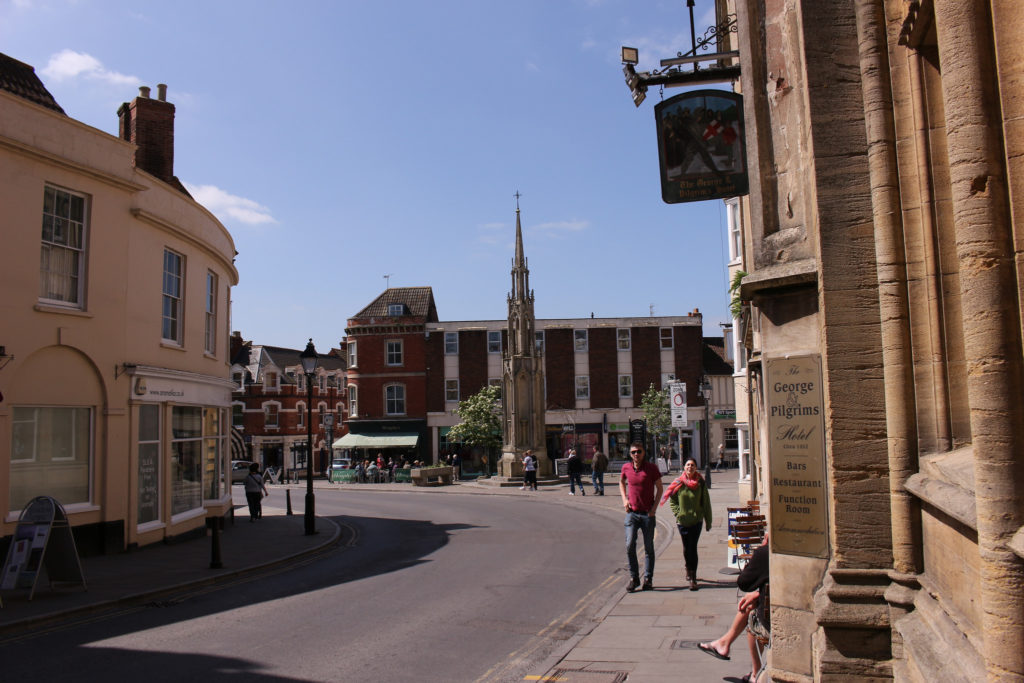 This was the George and Pilgrims Hotel, (above and below), a VERY historic hotel that was built in the late 15th century for visitors to the Glastonbury Abbey. It claims to be the oldest purpose-built public house in southwest England. And it’s really really interesting inside- we of course went in for a pint after our psychic readings. 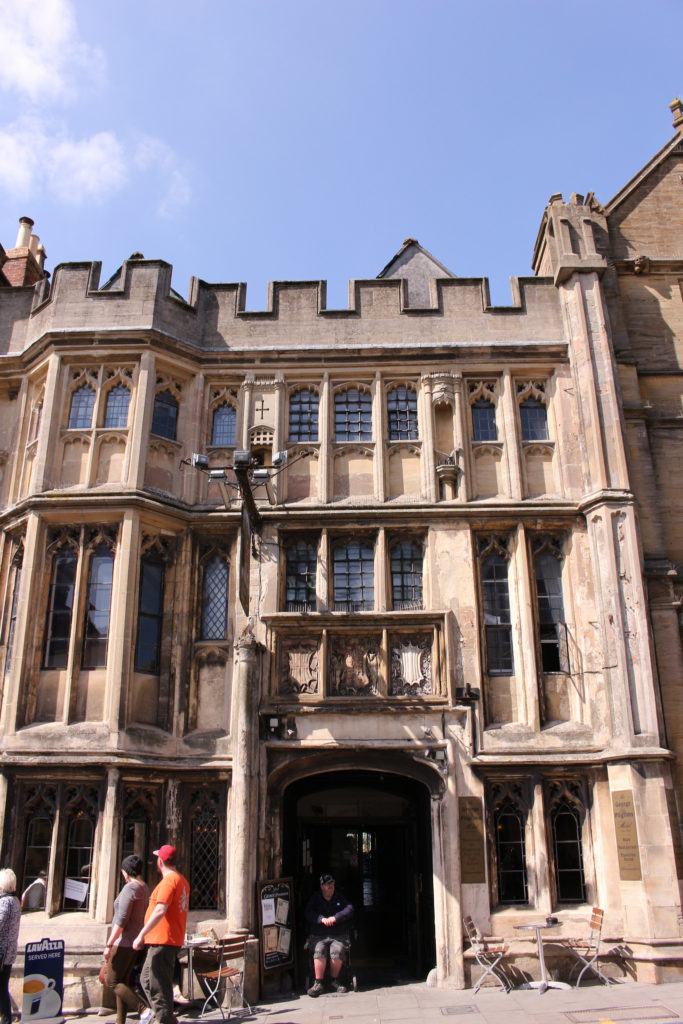 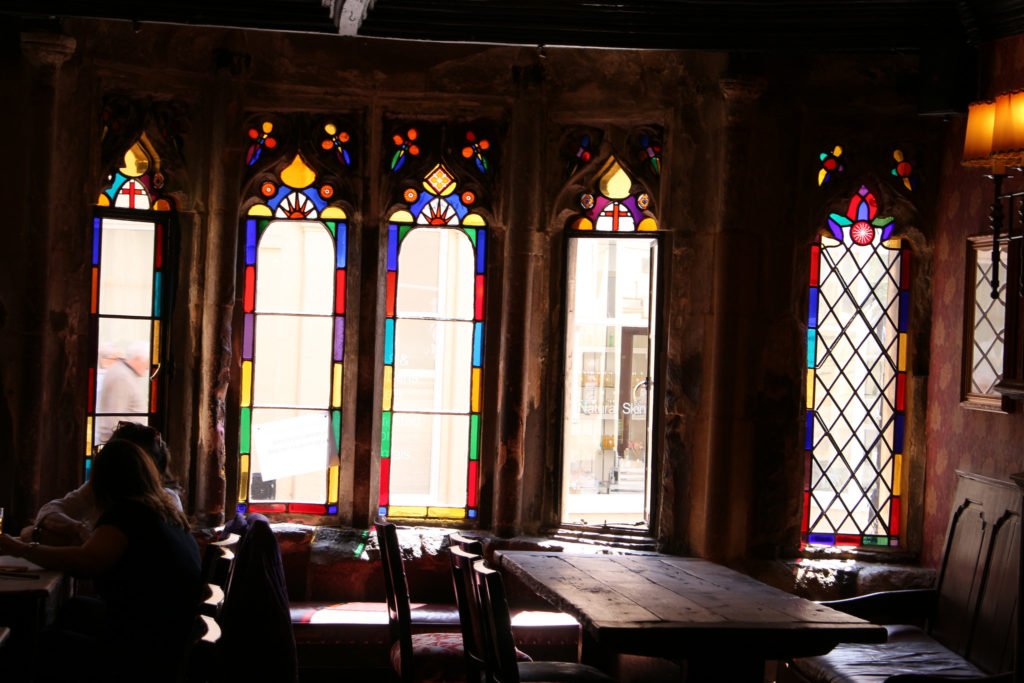 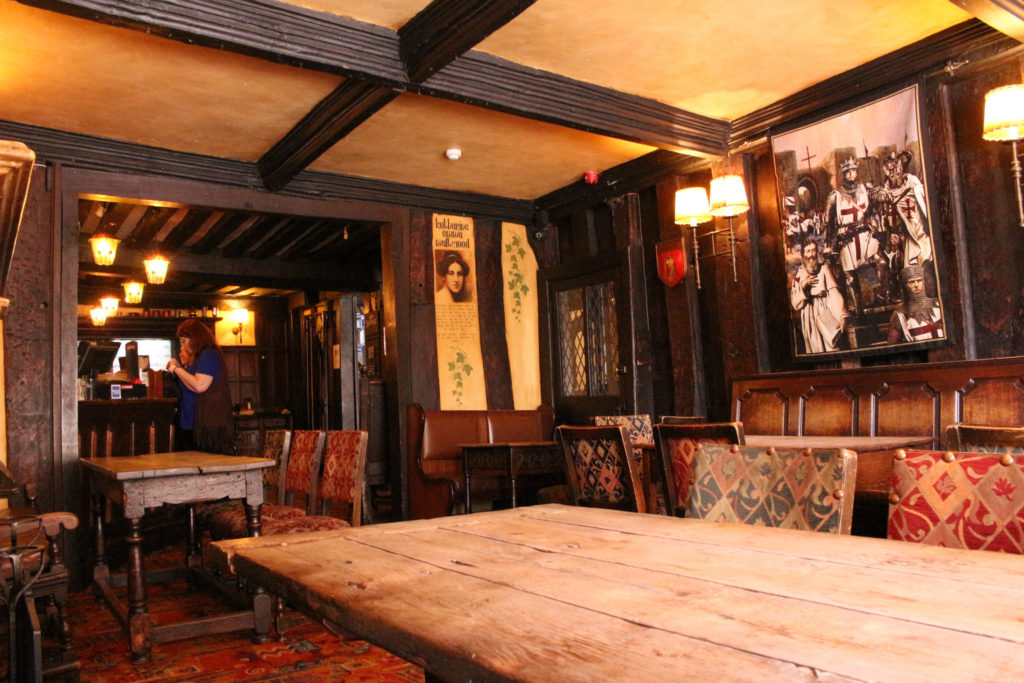 Then we just wandered around some more! This is an entrance to a bunch more fucking angel shops: 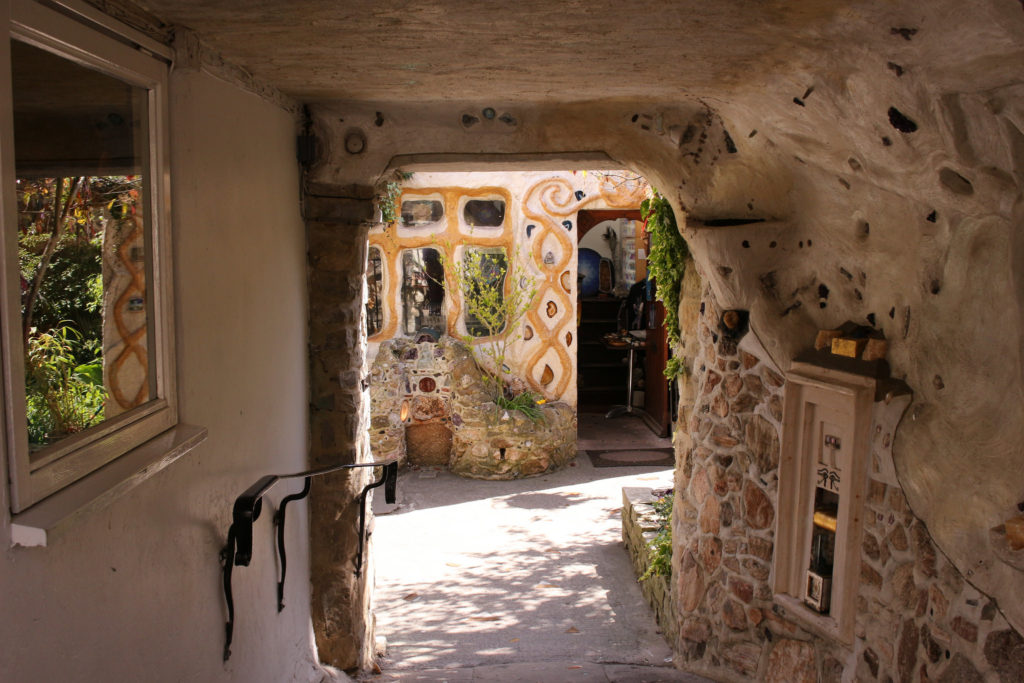 I forget where this even was, but it’s an old sign for the very famous Glastonbury Festival – I think from the 80s. It started out as a little music festival on a farm just outside Glastonbury in 1971, and has turned into this massive five-day event – 135,000 tickets sold every year since 2005, and for a number of years before that it was 150,000. Now it’s full of really famous bands – Radiohead was there last year! And a number of other years. As have been everyone anyone’s ever heard of. Adele, Coldplay, the bizarre Kanye West, The Who, The Rolling Stones, Dolly Parton (oddly), the Pixies,  have all been there recently. Mostly people camp in the traditional Glastonbury mud. I would probably have loved to go back when I was younger and liked mud and camping and festivals – – now it sounds horrible but it’s fun to read about.  It’s actually why we didn’t make it to Glastonbury in 2013, the trip we took Baker B with us and were staying in Marlborough. Due to Kim losing her passport we couldn’t go until Thursday, and that was when the festival started. There isn’t one this year- apparently they take a year off occasionally to let the land and the Glastonbury residents recover. 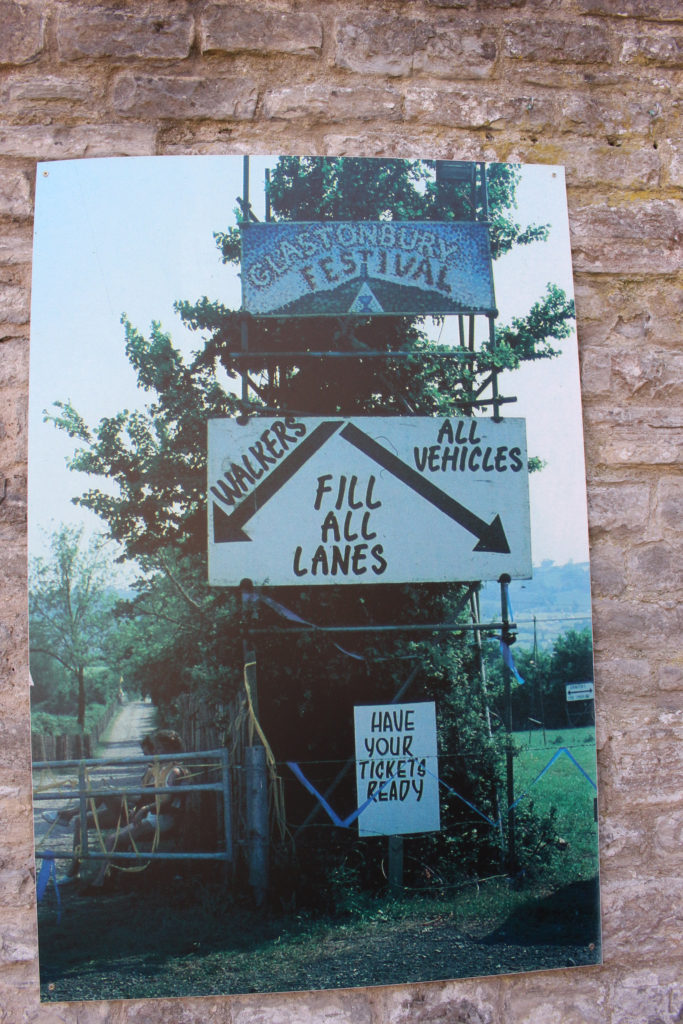 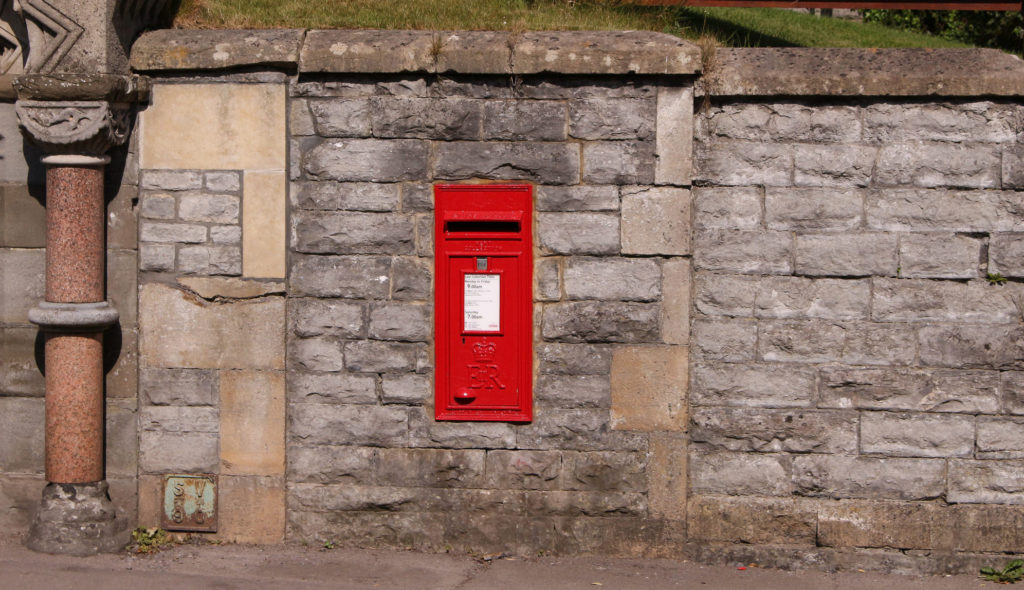 A very pretty old church, which is not the ruins of the Glastonbury Abbey. 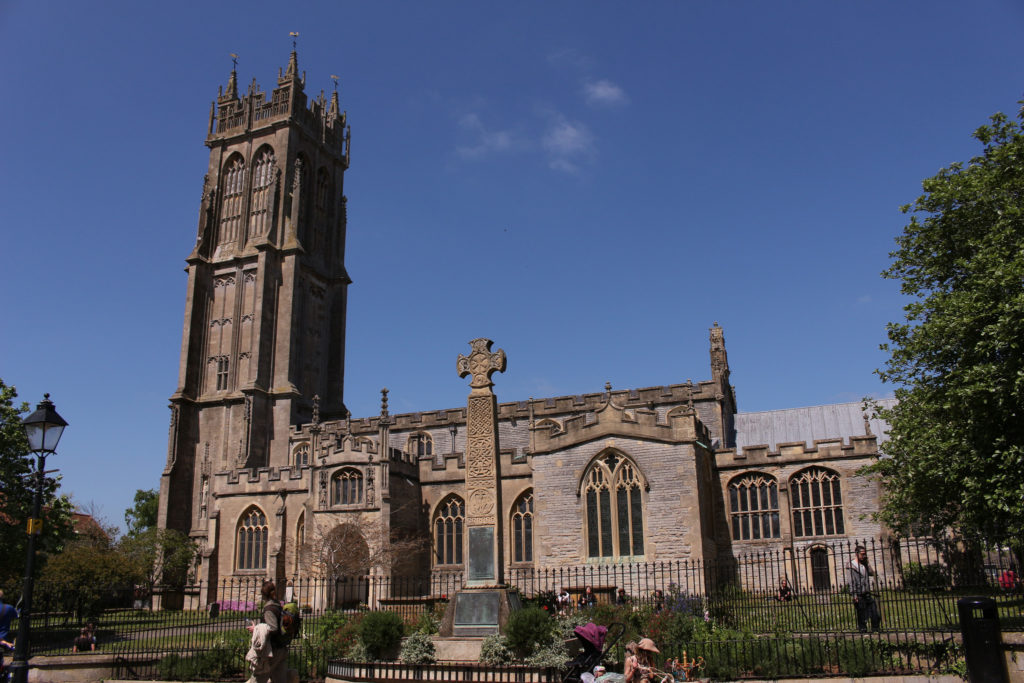 The first time we went to the Tor we parked outside town, but you can also walk up there from the high street, via a different path. Well, you can if you aren’t us. I’m sure no one will be surprised to hear that we could not figure out how the hell to get to the Tor by way of this clearly marked path to the Tor. 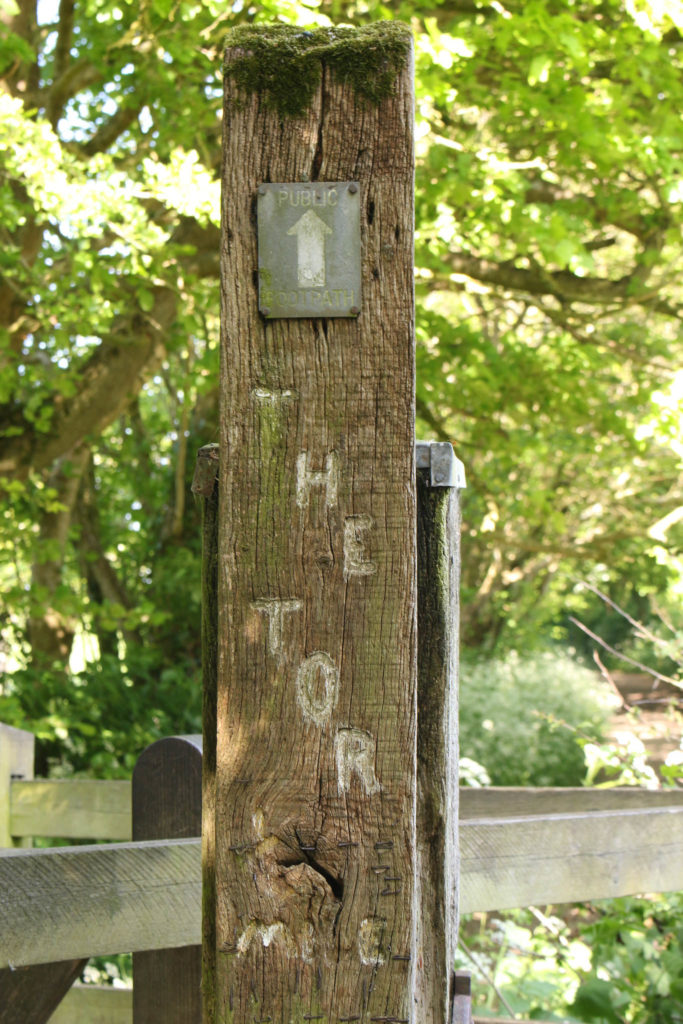 It was a very pretty walk, and you can see Glastonbury sprawling out below you as you go up the hill. 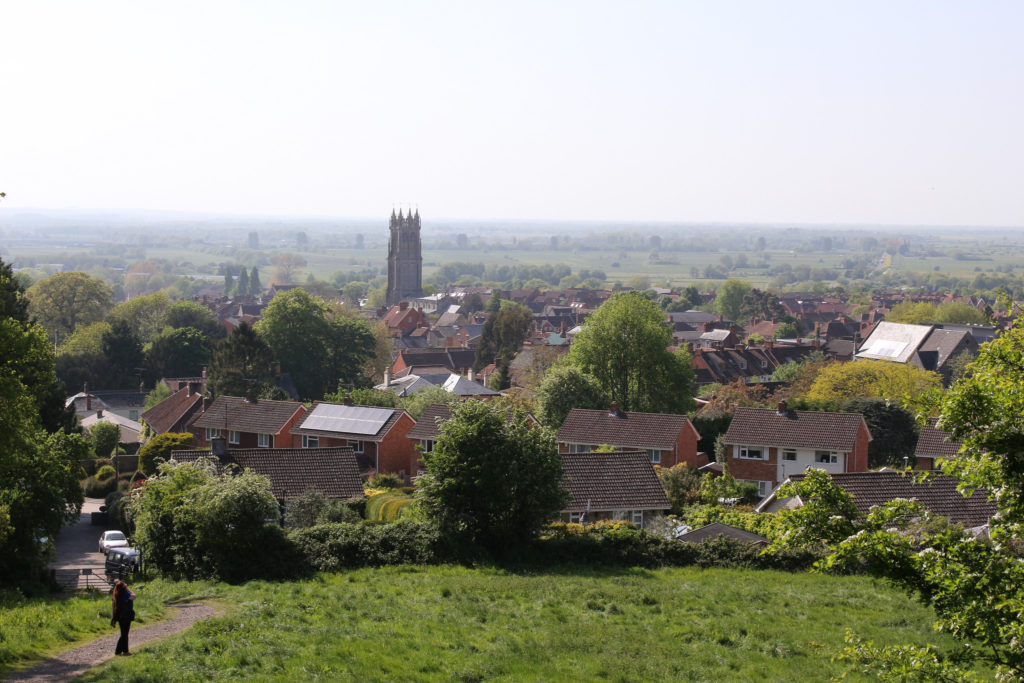 And you can see the Tor! Right there it is! 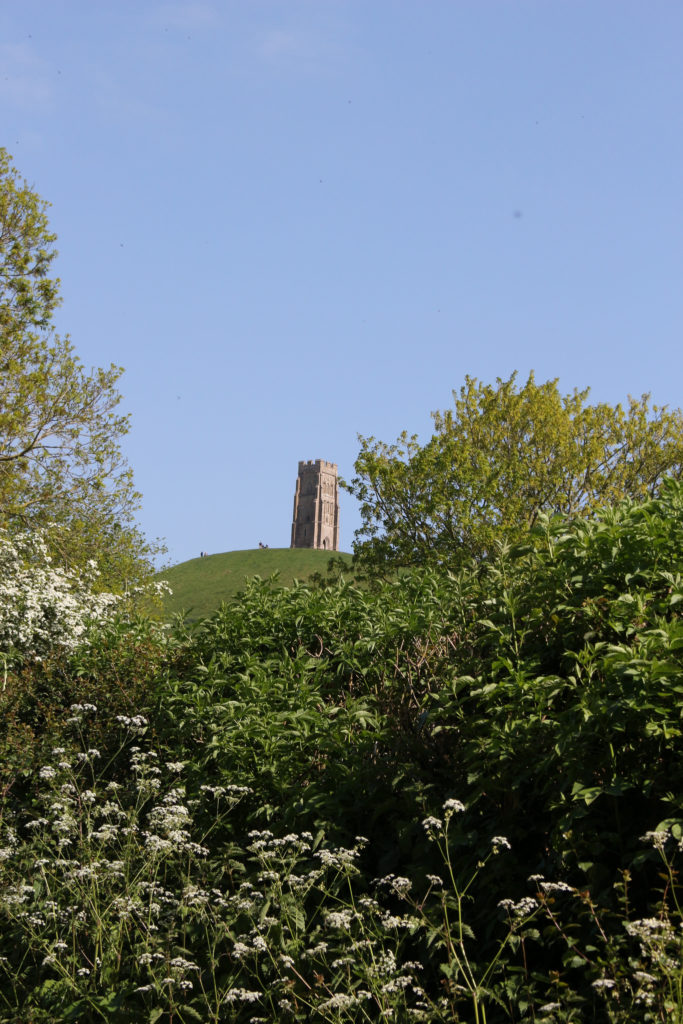 RIGHT THERE. Like, right in front of us!! And we could NOT figure out  how to get there! Well, of course you could just go right up the hill, but there is a path, and although it’s steep, it’s a winding zigzagging path that doesn’t go straight up. Like you would from this angle. In fact, I’m sure that’s part of it right there on the hill. But we came to a road, and there were NO signs for which way we needed to go. Of course we probably could have just pulled up a map on our phones, but – we didn’t even try. And by then poor Kim was literally hobbling. So, given the fact that it was probably 5:00 by then and she was in pain from her knee, we decided we’d just go back to Glastonbury another day. Because I also really wanted to see the Abbey, and I didn’t want Kim to end up crippled. AND we could just park where we’d parked the first time for the Tor- we actually did know how to get there. 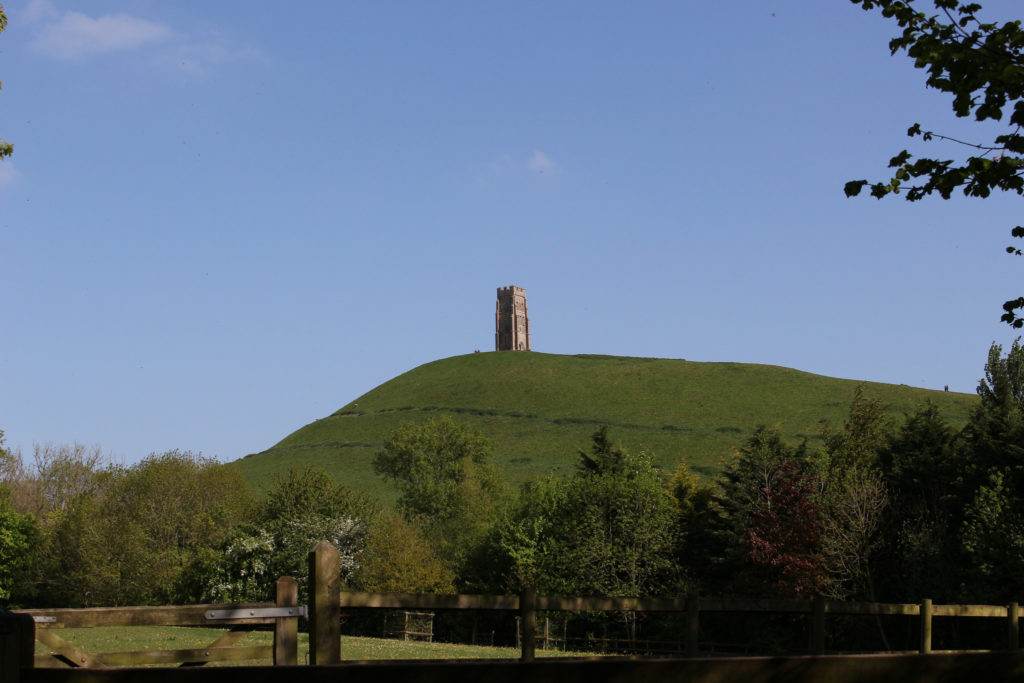 The sheep is definitely laughing at the idiot humans who can’t figure out how to get to the Tor that is RIGHT IN FRONT OF THEM!! 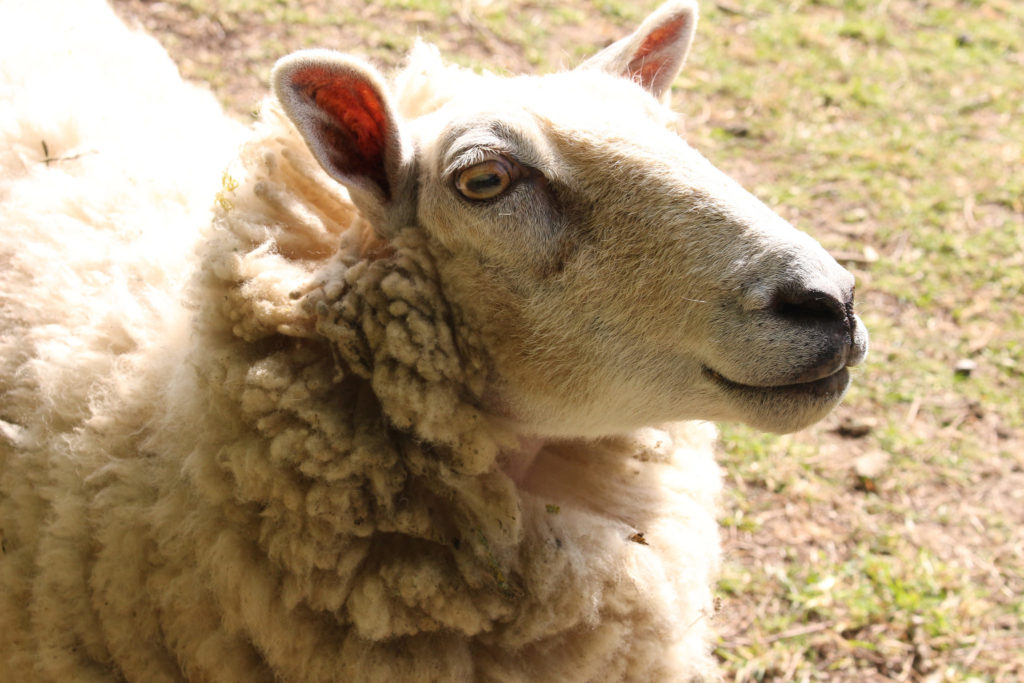 A white feather! You are blessed.

@byfaithalone It did really impress me, cynical as I am!