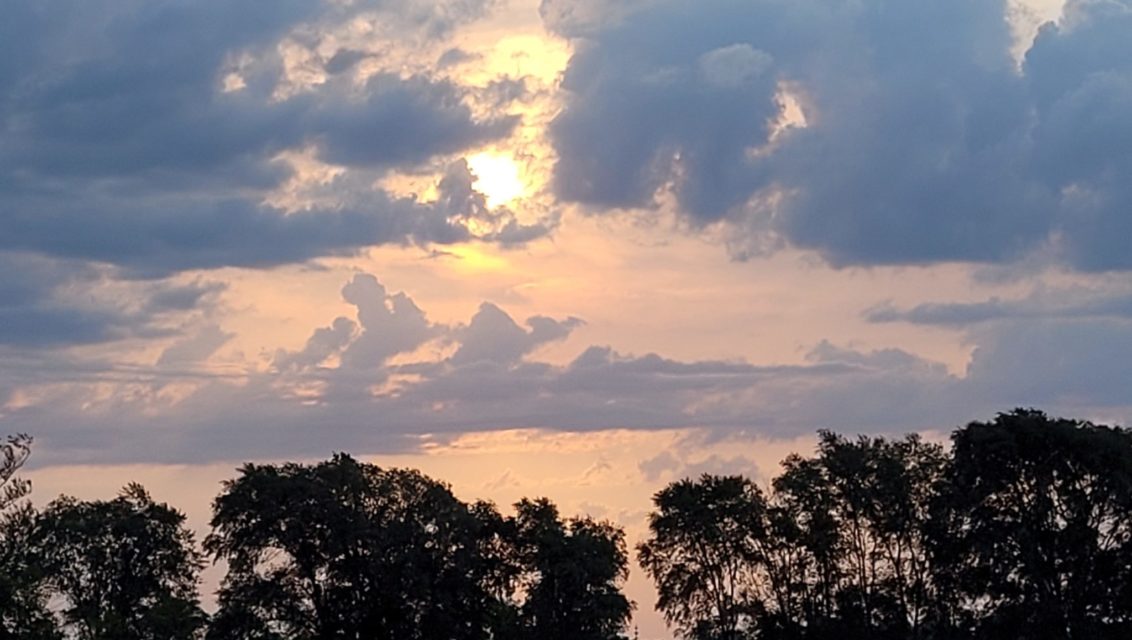 The wind is supposed to change today and take the smoke with it, but for now we continue to enjoy beautiful sunrises like this morning (above) and sunsets.

Dog. He had a bad day yesterday. As I was opening the sliding door to go out on my break, he came running full speed from the other room and right into the sliding screen door, ripping the screen out of the frame along the bottom third. What an idiot dog. So honey now has to buy new screening to repair the door.

Then, last evening he took off after something in the cornfield.  For 15 minutes I called and called for him and he didn’t return so I had to get in the car and drive the perimeter of the field until he finally came out. He had a quarter-size piece of skin missing under his eye, bloody. When he takes off after something, he has zero concern for himself and a high tolerance for pain. Corn leaves are sharp and I’m sure that’s how it happened because he had no other scratches that would indicate a fight with another animal. So I put some antibiotic ointment on the spot. Idiot dog. I worry about him if we move to the city and being confined, but on the other hand I think it might actually be good for him (and us) not to have the freedom to run off. Enclosed dog park would be better.

I’m kind of stressed and have too much on my mind. But, the hummingbirds have been providing some entertainment. All summer I only saw one male at the feeder, but recently there are 4 females fighting for nectar at the feeder. I’m not sure if they are offspring or just migrating through but it is so fun to see two land, see each other, take off in battle only to see another 1 or 2 swoop in for a quick drink. Yesterday I saw all 4 vying for a spot. Too bad hummingbirds never learn to share.

That sunrise is just amazing.

I’m sorry about dog and his (lack of) hunting skills.  You must get frustrated sometimes!

And the stress?  I can only say I’m sorry and lend an ear.

Despite the danger, what a great life it is for dog to be out and about.  I had a shih tzu who was as free as the doggie door leading to the back yard. When he had a rare opportunity to bound out of the house he ran right into the street and was hit by a neighbor’s van.. He broke his pelvis in 2 places. it took over $3K for operations and screws and all and a very  long period to heal.  I am sorry dog ran off into the cornfield. I will be very happy when he becomes citified because that will mean you got out of the woods.  😎

I have cranes on my research list.  Samd crames in particular. I don’t recall if I read about them in your diary but I found them interesting  to look at further.  😎

@tracker I have written about sand cranes in the past. Beautiful giant birds. You can usually hear their distinct call before you see them. Last year I spotted 10 of them in the field. It was one of my most spectacular nature moments.

Sand*hill* cranes I should say

@elkay    Thanks.  I was almost definitely sure I saw them here.  Thanks for clarifying they are sandhill cranes.  Should be in my next “A List” entry.  I am going to borrow your experience about hearing them before seeing them.  😎