After the last several weeks it is practically balmy outside 😉 Spent most of the day indoors doing that most hated housework. If I were a rich person, I would hire someone to clean my floors, bathroom, dust. Can’t stand it!! As I was mopping I looked out the window and there was the beautiful pileated woodpecker on the suet feeder!! Of course by the time I got to my phone and back to the window to take a pic it was just flying off. I noticed the red-breasted nuthatch several times throughout the day, so that wasn’t a fluke yesterday. It probably got too cold further north for the nuthatch so it decided to come down to the tropics of southern MN for a vacay.

When dog and I did finally venture out for our adventure, there was lots of evidence of visitors since yesterday morning. Coyotes came through, left droppings in two different areas and ‘marked’ their territory all over. Dog is not happy with someone else trying to claim his territory. Below is the coyote track compared to my 40lb dog’s paw, coyote on top.

Further along in the field we came upon something new this winter. 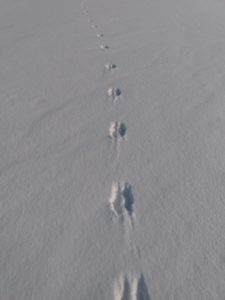 My first thought was squirrel or rabbit, but these tracks went across the field. We followed the tracks for half a mile or so. In some places the critter didn’t sink into the snow. So I could rule out squirrel/rabbit for sure after seeing the tracks on top of the snow. 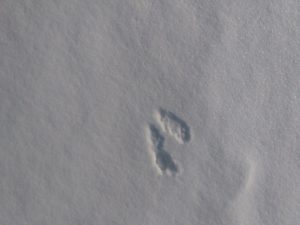 Because the back feet and front feet land in the same place, it is in the weasel family. Because we caught a picture of a mink on a trail cam last spring, I’m going to ID our latest visitor as a mink. 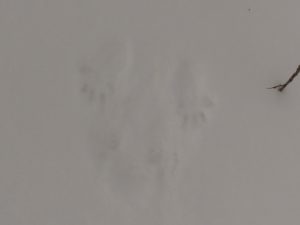