Another thick plume of smoke from Manitoba came in last evening. The sun rose as a red planet then turned to orange and now peach. For a few minutes it cast an eerie orange orb in the bedroom. 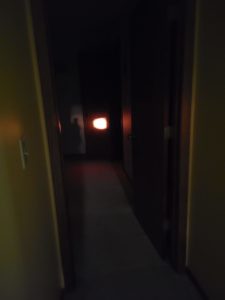 Yesterday while getting my daily sun on my break, I realized the buzzing creature on the zinnias was not a hummingbird but a sphinx moth, also called a hawk moth or hummingbird moth because they are so often mistaken for hummingbirds. They are quite large for a moth but are smaller than hummingbirds. My pictures aren’t the clearest because they’re fast, and it was about 12 ft away. But I’ve cropped the best of the pics.

Moth is in lower center of pic 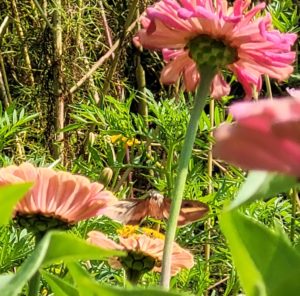 With its tongue extended to gather nectar 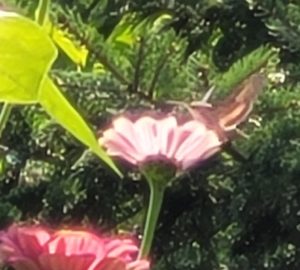 Size in relation to a zinnia: 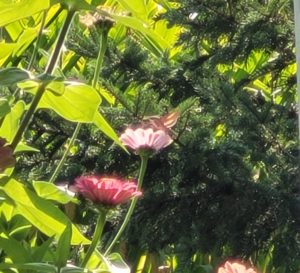 It’s always fun to see one every season.

I have been doing Qijong outside for a month+. The energy gathered from the forest is so strong. It helps me mentally.

Workmate gave her notice yesterday. Oh how I wish I could have been a fly on the wall to see manager’s expression. I’m told it was one of sadness and then worry. Oh yes, she’s got a lot to worry about. I realized though that so do I because my workmate also served as back up receptionist and now that will fall to a member of my team during our busy period and that means I’ll have to pick up the slack. Workmate reminded me I’m the last to remain of the group of 5 who all started 5 years ago when the division was created. Yes, I know. Sigh.

That is a magical moth!