The world feels a little off balance today. The moon was setting in the northwest sky this morning while the sun was rising in the southeast. I want to grab the Earth and get it realigned so that the sun and moon will be directly east and west again. It feels very off to me. I think it’s because they are in the sky at the same time and so far off from direct east/west that both are not where I think they should belong. 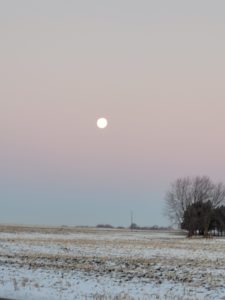 I have deactivated my Twitter account. I never tweeted but did use the platform to keep up on current events and breaking news. But back in Sept I realized it was also contributing to my depression, the daily blast of doom from all sides, especially during the election year. So I unfollowed all but a few sources. When Musk took over, Twitter really soured for me. You know how some people just make you feel really icky? He does that to me, just seeing his picture. I did not want, and could not be, a part of something he controlled. So I spent several weeks looking up options. I don’t do Facebook or TikTok or Insta or any of that and I don’t want to. So I ended up with Feedly and pulled in feeds from All Sides for national news, a local news source, and then some newsletters I’d been seeing on Twitter. And it’s working for me. On Saturday, I deactivated. No longer connected to the chief twit.

My Amazon membership goes next…