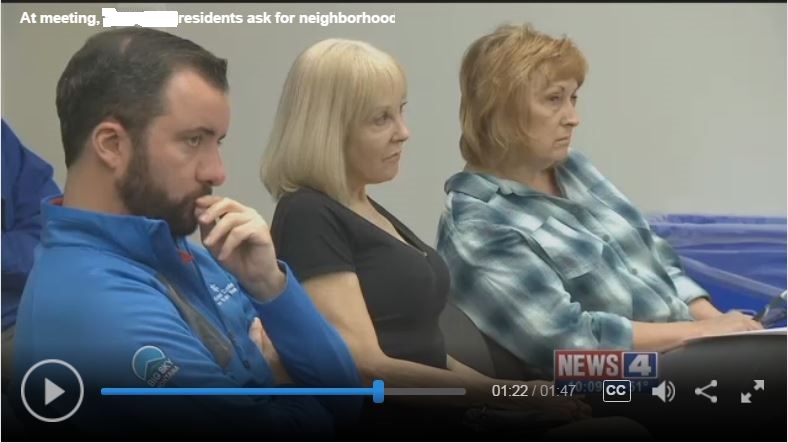 We’ve lived in our current house for two and a half years. We bought this house in part because, even though it’s in a subdivision, there is nothing directly behind our back yard except what I loving call “The Grand Canyon”. There’s about 150-200 yards of open area between our back yard fence and the next subdivision over. Not having someone’s house, road or driveway buttressed up against us was a big purchasing point for us.

A little under year after we bought the house and moved in, we started hearing about an on-going battle between the residents of our neighborhood and the city. The city had been trying to pass a spending bill to build a road through my beloved “Grand Canyon”, almost literally through our backyard. Oh, hell no.

There was a series of town hall meetings that eventually coalesced into the final voting meeting. There were seven meetings in all, and our whole neighborhood attended…for the most part. WE, however, attended every one of those meetings, showing our solidarity against the road. Many residents got up and addressed the board when we were given leave to make our pleas. We made such a big stink, almost getting kicked out at one point, that when the final meeting where a vote was going to be made several local TV news stations, and one national news station, showed up with their cameras. The featured picture is a screen shot from a News video from that final meeting, with my wife (Linda, the blond) staring daggers at the mayor and the board.

We found out the next day that the board cast a split tie vote, leaving the Mayor to cast the deciding vote. I thought for sure we were sank. The Mayor, who was on his way out and onto a different public office in a different city, vote in favor of the residents and against the road. YEAH!! VINDICATION!!

Good for you for participating (very) actively in the civil process! The world needs more residents who stand up for their rights.

Linda sure does know how to stare daggers 🙂

Awesome!  Happy for you all!  We’re like you, love having a bit of privacy, peace and quiet where we live.  Can’t beat it.

Congratulations!!!! We found out not long after moving into our house that there were plans for a big highway bypassing town that would possibly go right below our house (we’re on a ridge). There were several alternate routes, none of them good. That was years ago and there’s been little talk of it in a long time. Of course we STILL got an enormous student housing complex on the ridge facing us, which means students shrieking non-stop and looking out at a little city where there was woods when we moved in.

Be honest, how often have you been on the receiving end of that stare?

Congratulations and well done on defending your position.

Wonderful that you won the battle.  Was that the first time you’ve ever done anything like that?  If so, I bet it was a fantastic learning experience.

@wildrose_2 Not only was it my first time doing that, this is the first house I’ve ever bought. I’ve always lived in apartments until a couple of years ago. 😀

Wonderful.  Pretty wife too.  Beware thho.  Now that the mayor is gone, someone will bring up to the board again.

@georgette You’re correct. We’re keep a close watch and Linda is going to EVERY meeting they schedule. 😉