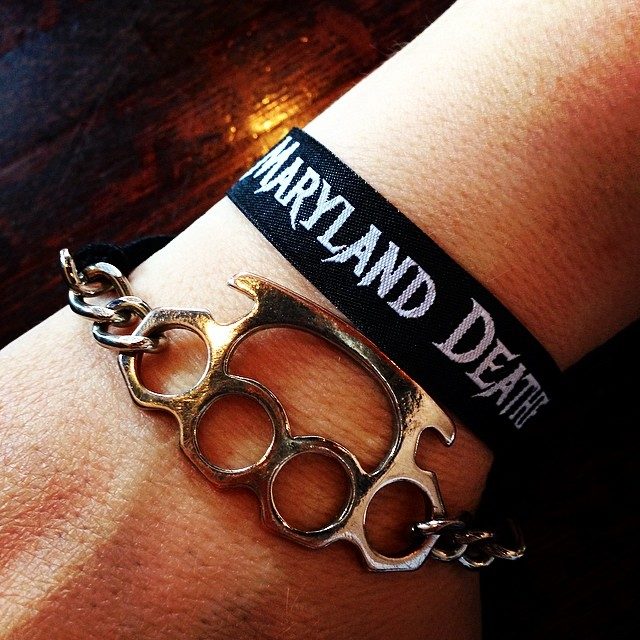 Today’s my Friday!  Tomorrow I head up to Baltimore for our annual Maryland Deathfest trip — four nonstop days of brutal metal bands.  This will be my sixth year in a row, and I am so stoked!  This will be my first year going without Chris, but the rest of us — me, Rob and Evelyn — have decided that there’s no way in hell we’re nixing this trip because of our separation drama.  MDF is seriously my favorite weekend of the year.  There are usually between 60-80 bands, tons of merch booths, and loads of shitty food.  For many of the bands, this will be their first and only time playing in the US.  It really is an experience like no other, and I’m going to miss doing this after I move across the country.

My first couple of years at MDF, it was held in this old club called Sonar.  It’s since been shut down, but the shows there were epic.  Many of the people attending either couldn’t afford or didn’t want to pay for a hotel, so they’d camp the full four days in tents (with no showers available) out in the parking lot.  I don’t quite know how to describe the stench of unbathed moshers, dreads, rancid beer and urine.  But in a bizarre way, it was sublime.  It was so hot and crowded inside that you wore as little clothing as possible.  Nobody gave a shit about how you looked.  All anyone cared about was the music and releasing all their pent up stress, frustration, anger, and hell, even excitement and glee in the monstrous circle pits that filled the entire room.  Oh, the memories I have of metalheads bashing every toilet in the club, of walking in on numerous sex acts in dark hallways…

The two years following, after Sonar shut down, MDF was moved to the Edison Lot, a vast outdoor parking lot situated under a major highway overpass.  [Fun fact, that lot was where Jimmy McNulty would meet his FBI contact to hand over information on the Wire.  And the Baltimore Sun really does look down over it.]  One year it rained the whole time, and the next it was scorching under the mid-day sun.  By the time the moon rose, you were spending all your money at the merch tents buying band hoodies to keep from freezing to death.  The organizers brought in food trucks that renamed all their offerings with metalhead friendly monikers like Pork Lord Tacos and Headbangin HotDogs.  Concert goers that were unable to get tickets would camp out on the street, just outside the chain link fence, listening to the beats and trying to sell shots and bottled water to passersby.  By those years, the four of us had found a sweet hotel setup that we always booked in advance — a converted top-floor, two-bedroom apartment that we shared for the weekend.  The walk from the hotel to the venue took us through some of the seediest streets in the city, but banded together and dressed like we were ready to summon demons, I always felt safe.

Last year (and for this year’s fest), MDF moved back indoors.  The shows are split between Rams Head Live and a smaller venue called Soundstage.  While it’s nice not having to worry about multiple changes of clothes to account for the weather, Rams Head just doesn’t have the same charm as Sonar or Edison.  For one, you’re not allowed to mosh inside.  People do it anyway, but it puts you on edge wondering if security is gonna freak out.  Soundstage is a great venue, but given the size, it’s usually the lesser known bands playing there.  Either that, or they book it solely with speed metal or crust punk bands, neither of which are really my thing.  The merch booths have been cut in half since they have to squeeze them all in the back corner of the Power Plant Live compound.  And gone are the kitschy food trucks in favor of the row of mediocre restaurants lining the street.

I guess when I really think about it, it’s a good time to move on.  The organizers are now running a California Deathfest, and we’re considering checking that out next year.  Plus, we found a 100% home grown option right in Colorado Springs.  71 Grind is holding it’s very first three-day fest this June, and looking at the lineup and accommodations, it appears to be much like the earliest days of MDF — charm included.

Maybe I should just take that as a sign that I’m moving in the right direction.