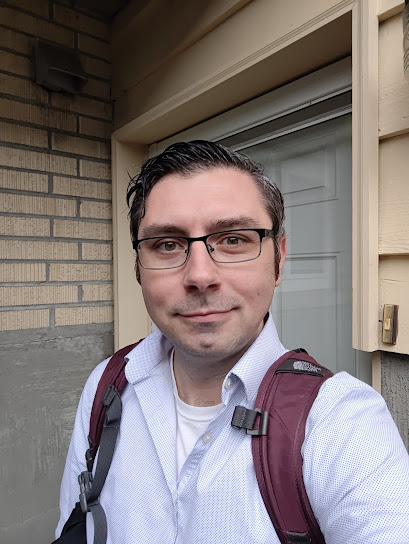 Alright, the week. I seem to be making this a weekly routine.

Saturday, May 21 I took my daughter for her first bus rides as we met my family for dinner along the waterfront. It’s a novel experience. The sea gulls fly around or swim below the eating area and regularly have fries tossed at them. My daughter, 7 and nephew age 3 for all intents and purposes (his birthday is this weekend) had a blast. We wandered around some shops together. One of the most notable things was something my mom was fixated on:

There was a pedal-chariot waiting for patrons. He was decked out in a Captain America outfit and dancing to the music he was playing. My mom leans in while waiting in line for ice cream, “He’s the wrong color.” I’m puzzled and expressed that with my face. She added “Captain America is black now!” I was shocked and disgusted at what she said. She’s still the same woman espousing racial slurs at other drivers on the road while driving my sister and I around as kids. What does it matter? … and, OK Boomer.

Sunday, May 22 my daughter and I went to Seattle Center so she could play in the fountain. It never went into show-mode which was disappointing but we were there for two hours still. It was an awesome afternoon EXCEPT one huge thing. We had lunch at MOD Pizza eating out on a patio with a man playing different horn instruments to background music and vocals. I said, “this is what life is about.” As we were leaving the table I was feeling my pockets after my Fitbit kept indicating that my phone was not detected. Yes, I lost my phone. It was almost an hour later and in that time it was picked up and not able to be found. Effing great. Here I am having a great time and now I have to cut it short so I can lock that phone down and ensure my identity isn’t taken for a ride.

Monday, May 23 I almost finished setting up my phone. I had to go back to the store to get help connecting to the network now that I accessed my Google account.

Tuesday, May 24 was my birthday, and I took the day off work. It’s not a year where I went to the dentist, nor had a palm reading done… but walked to a hardware store, ATM and Emerald City Smoothie for a birthday treat. My neighbor upstairs tends to leave laundry in the washer long enough for it go sour and that was the case Tuesday. I had used my last pair of socks, underwear and had no white shirts to go under my dress shirts so… I spent a couple of hours at the laundromat. Later on, that day I matched up with someone off OKCupid and had a lively conversation. This one might go somewhere.

Wednesday, May 25 back at work and more conversation with the same person.

Thursday, May 26... I was tired from two nights of staying up past midnight talking and texting with the same person so all I did was go home and play Minecraft.

Now for the introspective part:

It’s been just over a week since I broke up with my girlfriend and honestly, it’s enabled me to get back into a mode where I feel like an emotional… shaman? Guru?

I had an epiphany in a fact I had been struggling with lately: All my relationships have failed to this point. What’s to say the next one works? Why do I keep believing the next one is “the one” when they’re likely not “the one” 100% of the time so far? Hmm, well what can I change? Perspective. I can change my perspective. I left my relationship, marriage of 14 years fully aware that I could end up being single and alone. That is better than the alternative. Sitting outside the laundromat, on my birthday I thought “I like this. It’s kind of a waste of time. I’m sitting in front of the place as part of the background. I’ve driven or walked past others in this place and is this one scenario for what was going on with them? Why didn’t I do this more? Do I need to keep doing this sort of thing? I like being single. I can do these things at will.” That brings me to the point of approaching each match and chance at a relationship with healthy respect and a clear mind to accurately assess whether it’s something worth continuing to invest time or respectfully state I’m not feeling the vibe and go on my merry way.

I’ve obviously been in a position where I was desperate. I was bending over backwards to make something work. I was in a mindset to not be emotionally available. I had triggers to work through. Others are going through similar things. I’m not going to push anything. They say timing is everything. That’s just what it is and there’s no fighting it. I can and should direct my energy in other pursuits similar to water as it flows around obstacles in the river.

I liked this profile on Facebook Dating where she had virtually no information; nothing written out. There were 4 pictures all from the same angle only the shirts were different and from the passenger seat of a car o.O. I figured I’d try it and see what happened. We texted through the app for a few days and even got into the deeper topic of attachment styles and self growth. She killed the conversation. I didn’t know what to say to restart it which indicates that I was feeling this is not a good match. A day later she follows up, “I take it you’re not interested.” Being who I am there is a propensity to be indecisive when it comes to people. I stated that I didn’t know what to ask next and rattled off 4 or 5 questions. Her response? “Let me make this easy for you Justin, I need an alpha and clearly you’re not that so good luck.” WHAT WAS THE POINT OF EVEN ASKING ME? Ah hem. So yes. It’s not smooth sailing. I’ll put that in a box and file it away as a future example and occasional amusement. Going forward, I won’t be the guy that ghosts people and I’m not about to give veiled rhetorical questions. Life is hard enough and showing respect should be a priority.

It seems with each passing year, my birthday gets more and more simple

The FB Dating lady seems kinda rude. There would be more polite ways to tell you that she’s not interested and that you are not her type

@anhmymuminah Fo shizzle – for her reported self-growth it doesn’t seem like respect for others is part of the deal. Oh well – it’s the past and a story for amusement at this point 😀