Another hot day — NOAA says 97 but temp on the patio is 100.  Nothing much new.  Penny was outside & I didn’t realize it when I shut the sliding door to turn the AC on.  She promptly tore down the magnetic screen door down trying to get in.  The little b1tch.  I hate to admit this, but I wish I didn’t have her.  She’s not friendly, doesn’t like to be petted, doesn’t get up in my lap unless she’s begging for food.  She’s hugely overweight & always begging for food.  I’d get rid of her but I think Marty would miss her, even though they don’t have much to do with each other & she’s always attacking him.  And she’s always lying down right in the way — her newest form of begging for food.  It was hard for me to get that screen door up, & once it’s been pulled down it won’t stay up right again.  Luckily I have a replacement door, which I’ll put up & staple it in place so hopefully she can’t pull that one down.  It’s just frustrating to have to redo something when my back hurts so badly & I’m so far behind anyway. 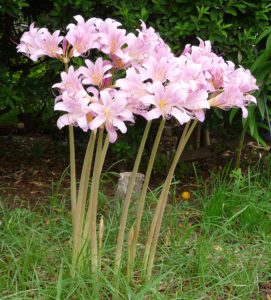 The scientific name is Lycoris squamigera and they’re also called Resurrection Lily or surprise lily. The leaves sprout and grow in the spring, then die back during June; flowers appear in late July or early August. The flowers are white or pink and fragrant. The flowers spring dramatically from the ground in mid to late summer; it usually takes only four to five days from first emergence to full bloom. This suddenness is reflected in its common names: surprise lily, magic lily, and resurrection lily. I dug up a bunch of them –they were too near the cement walkway and the leaves semi-blocked it.  I transplanted them to various places but they didn’t bloom.  My guess is they have to be in the ground for a full cycle, so hopefully they’ll bloom next year.

And the tomato plant has really grown!  Still in the early stage because I planted it so late in the season, but still I might get a few tomatoes from it.  I hope so — I love Sweet 100s and eat them like candy.  There won’t be enough for me to do that from this one wee plant, but since I can’t get to the farmers’ market to buy a whole big bag full, this will have to do.  I must remember to put some Epsom salts on it like my friend told me to.

Day 5 of the exercise regime.  Got up this morning, fed the cats & went out on the patio.  Watered the container plants; planted a calla lily bulb; cut down several large tree-like plants growing along the path by the side of the house; brought the bins in after garbage pickup yesterday & emptied the recycle can & the garbage can from the kitchen.  Did 2 loads of laundry; hung one out to dry.  Put more books up for trade on PBS (Paperback Swap).  My back didn’t seem to hurt so much today,and my breathing, while I was still panting after each one of those forays, calmed down a little quicker & I didn’t have to use the Albuterol.  So maybe all this exercise stuff is working!  Now I have to do the washing up from last night, but I’ve accomplished so much more today than most days so I’m happy.  Hoping this is the start of getting back in shape … or it could be the usual pattern of a good day followed by a totally-wiped out day followed by a couple of days of gradually building back up.  Guess we’ll see what tomorrow brings.

More is not always better. And, in my old age, I have found that doing stuff slowly still gets the stuff done. Good luck.

@bonnierose Obviously that’s where I’m at: slowly.  After all the tortoise won.  And I don’t have a choice: it’s either slowly or else give up, sit down & rot, & wind up in a wheelchair.  Which I have no intention of doing!