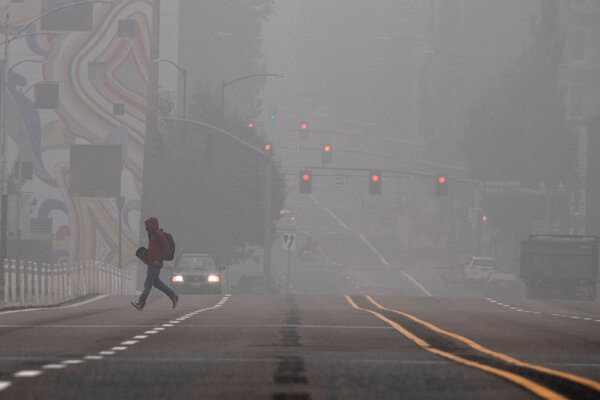 The air we breathe

During a short walk in her Los Angeles neighborhood a few days ago, my colleague Jill Cowan could smell and feel the smoke that had entered her throat. In Estacada, Ore., southeast of Portland, Lisa Jones told The Washington Post that breathing the air felt “like sticking yourself in a little room with 12 people all around you, smoking cigarettes.” A friend of hers, Deborah Stratton, added, “It burns your chest.”

The worst effects of the wildfires are the direct ones: the deaths, the loss of homes and the destruction of natural habitat. But the secondary pollution effects — from the smoke that is clogging the air — are not minor.

The world’s most polluted cities are typically in Asia, like Delhi, Beijing, Lahore and Dhaka. Over the last few days, though, Portland, Ore., has had significantly worse air quality than any other city in the world. The air in Los Angeles, San Francisco and Seattle hasn’t been quite so bad, but it has still been worse than in virtually any place outside the U.S. 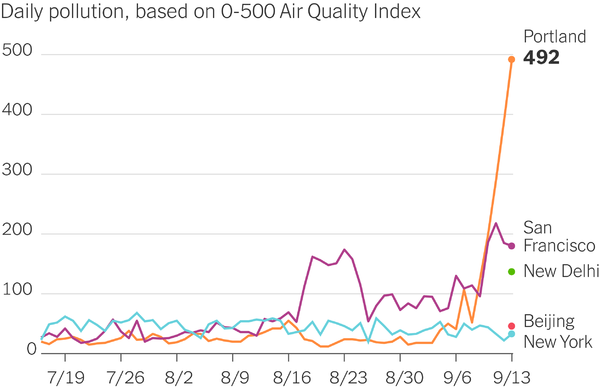 Amazing that Portland’s & San Francisco’s AQI is worse than Beijing’s, once considered the dirtiest air on the planet!

Long-term exposure to the tiny particles in polluted air increases the risk of asthma, lung disorders, heart attacks and strokes. But even short-term exposure can lead to more respiratory problems, as Yifang Zhu, a professor at the U.C.L.A. Fielding School of Public Health, told my colleague Sanam Yar. And this year’s wildfires — some of which have already been going for about a month — may have weeks to burn. California’s wildfire season still has four months left.

At least 27 people have died in the fires, and by yesterday afternoon the haze was visible as far east as New York and Washington.

President Trump visited California yesterday and said, “I don’t think science knows” what is happening. Many scientists disagree and explain that climate change has increased the frequency and severity of the fires. Joe Biden argued that a second Trump term would worsen the problem and called the president a “climate arsonist.”

I’m happy to report that today the AQI was 134 when I got up — Unhealthy for Sensitive Groups.  Even though I am a Sensitive Group (asthma, respiratory difficulties) I flung open the sliding door & the cats raced outside like they were fleeing the 4 Horsemen.  I took out the rubbish & the recyclables — both bins were piled well over the top.  But this was the first day in over a week that the AQI has been so “good” — I watered the container plants on the patio too.  I didn’t leave the door open very long, but it was so wonderful while I did — temperature was cool (70°) and it was really nice to have something besides stale, recycled air.

I highlighted that statement in red because it’s a bit deceptive, as well as being scary as hell.  This is September; there are only 3 more months left in the year (got your Christmas shopping done yet?😉)  So that means that the fire season lasts through January?

This year fire season started in May with the Interstate 5 Fire in Kings County, and appears to be going to continue through January, which leaves just 3 months when it’s not fire season: February, March and April.

While wildfires are a natural part of California’s landscape, the fire season in California and across the West is starting earlier and ending later each year. Climate change is considered a key driver of this trend. Warmer spring and summer temperatures, reduced snowpack, and earlier spring snowmelt create longer and more intense dry seasons that increase moisture stress on vegetation and make forests more susceptible to severe wildfire. The length of fire season is estimated to have increased by 75 days across the Sierras and seems to correspond with an increase in the extent of forest fires across the state. ~~ CalFire

The peak of the wildfire season usually occurs between July and November when hot, dry winds are most frequent. The wildfire season typically does not end until the first significant rainstorm of autumn arrives, which is usually around mid October in Northern California, and roughly between the end of October to early November in Southern California.  ~~Wikipedia  Except that often we don’t get rain until well into November, or even December or January.

This is all a pretty frightening scenario.  Earlier springs (when I was working for the Forest Service, we couldn’t get out in the field to survey until mid-May & even then there would be huge snow banks scattered around, now the first fire of the season was in May), longer & hotter summers, shorter & later falls, and dry winters — devastating recipe for almost continual fires the year round.  It’s like something out of a science fiction book, except it’s real & it’s happening.

In other news, Housemate took me to Best Buy to pick up the printer yesterday, and the new computer was also delivered.  Now comes the fun part — getting everything transferred from the old computer to the new one.

Day 40: My neighbor called this morning & invited me to go to Winco with her.  I never turn down a chance to go grocery shopping — the next chance might be a week away or more.  The AQI was too bad for me to go walking, but walked the entire store, then walked outside to the car but she wasn’t there so walked back inside & waited for her, then walked back out. When we got home, put all my groceries on the lawn & then brought them in a wee bit at a time, must have made 5 round trips. So got my walking in for the day. But it exhausted me — had my mask on all the while, so have to take it easy for the rest of the day. No problem — lots to get done on the computer & then there’s always reading.

Our air quality is the highest it has ever been since forever ago….and plus we have another fire that is a bit too close to home for me.  And we also have fires in what we call the interior.

Here is the link for the newest fire.

Our air is in the green today, woo hoo! Mowed and watered and broke down cardboard boxes for recycling. Em cut tree branches and now everyone but me is in a tent in the backyard. I hope it lasts and your air improves too.

My sister in Seattle is very much impacted by this.  She said that before three years ago they never had smoke problems.  It is scary and seems incontrovertibly made much worse by human-caused global warming!

We have an “Air Quality Alert” here in metro Phoenix. It’s a bit hazy, but no smell of smoke. What troubles me when I watch one of the cable news stations is that they are spending so much time on politics and the upcoming election and not so much time covering the western wildfires. Thankyou for your reporting on this because we’re not getting much news coverage of these terrible fires here. There’s been some coverage of the flooding from Hurricane Sally.

Hope there is another better air quality day soon!