I was just about to write about last weekend when I saw the latest theme of the week. An enjoyable day. Well, I’ve been on vacation since last Friday. Technically, Thursday afternoon started that vacation. I left work Thursday and after packing up the car and picking up the family, we went to the funeral service for mycoworker’s boyfriend. Afterward, we hit the road. We dropped the kids off at my best friend’s house, then headed to Jacksonville the next morning. I am so beyond happy that we wound up going on this trip. Thankfully, my brother-in-law paid the majority of the light bill so we could really enjoy ourselves. We got there around 11:30, right before the gates opened. The line was ridiculous, but it moved quickly and we all chatted about who we were excited to see. We saw several bands, and finished the night with Five Finger Death Punch. This was our 3rd time seeing them, and as always, they we pretty awesome. We left early, before Ozzy, so we could spend some quiet alone time together. I’d wanted to see him, but the quiet alone time was much needed. Now, for the day that goes with the title. We got up around 9ish Saturday morning and hung out before deciding to go in to the concert grounds. Finally, we showered and headed in. There weren’t as many bands we were looking forward to, so we kind of hung out until the ones we were there for were scheduled. We wound up finding out that FYE was sponsoring signings, you just had to purchase a cd. Unfortunately, we didn’t have enough for both of us without sacrificing food. So, Darryl encouraged me to buy one of Breaking Benjamin’s cds so I could get it signed. I have all of them, of course, lol, so I bought another copy of my favorite one and made one of my dreams a reality. They wouldn’t let us take photos, so the line could keep moving,  but here’s the cd.

I was so beyond happy and I started crying because this band, with this cd in particular, got me through so much. I even have their symbol tattooed on my arm. Shown in the next pic. 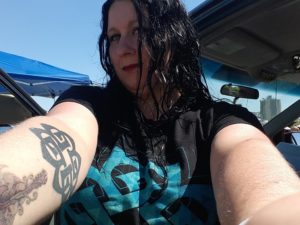 After I got my cd signed, we watched a little of the band that Darryl had been looking forward to before he took me across the park to the main stage where Breaking Benjamin was about to perform. I had a fairly decent spot, but I got jarred around quite a bit when a mosh pit broke out and then half of the crowd surfing. It was pretty damn awesome though. After that show was over we headed back to the campground to shower and whatnot before the crowd. We skipped a couple bands so we could get there fairly early. We hung out late into the night and then a few hours more the next morning. We wound up skipping the last day and heading back early so we could hang out with my best friend and her family. We stayed with them until Monday evening and I drove us back through the night. We got home around 2 am and went to bed. Saturday was by the the most enjoyable day I’ve had in a long time and this whole vacation was something we really need. I can’t wait until next year’s concert because we’re planning to do a group thing with some friends. I definitely want to make this a yearly thing for us. I’m still on vacation until Monday, and I’m using this time to do some spring cleaning and get rid of some things. I’m also trying to hang out with the kiddos, since I don’t get to nearly as much as I’d like to. For now, that’s all. Until next time, here’s a pic of Darryl and me on the first day of the concert. <3<3<3 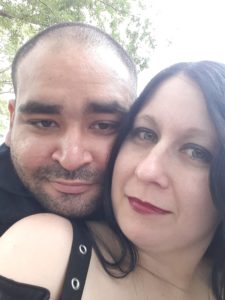