So yesterday I  did end up getting an ice cream cake after all. It was a genetic one from Giant Eagle. It tasted good, not as good as DQ’s but way better than a regular cake. The picnic was nice. The food was good too. We didn’t have alot, just cheeseburgers, hot sausage, potatoe salad and baked beans but it was good enough just for us. It wasn’t like we had a huge picnic with lots of guests.

I was watching my brother with the baby. He is such a good dad. That little girl has him wrapped around her finger. She can do no wrong and he won’t let anyone correct her. He says she can do what she wants. His girlfriend says no way, she’ll end up like her older daughter who is a handful. The closer I looked at my brother and the baby I have to say she looks somewhat like him. He doesn’t want a DNA test because to him she’s his daughter and that’s that. He doesn’t think he could handle it if it came bak that she isn’t his. I saw a picture of the other guy in question who could be her father and she doesn’t look at all like him. He’s darker skinned Italian, dark hair, dark eyes. The baby is very white, light eyes and light hair. My brother was blonde when he was little though his hair now is light brown but he’s light skinned and brown eyes. The mom is Italian with brown eyes and brown hair also. I guess she could have taken on characteristics of someone further down the genetic tree but I really am thinking my brother is the dad. It doesn’t matter to me or my family though. She’s ours! She knows me as Aunt Cyndi and my mom and dad as grandma and “Pa” as she calls my dad. She calls my brother “Da”. I love that little girl. I don’t have any real good pictures of her but I posted the ones I do have below. 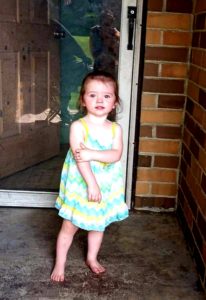 My son is suppose to come mow the lawn today. I don’t know that he’ll make it. He was still up at 11:30 this morning, hadn’t been to sleep yet. So I haven’t tried to wake him up yet. I’ll try in a little bit but I don’t know that he’ll wake up for me. It’s raining the next several days so he can’t do it then. The grass isn’t too bad yet but once it rains I’m sure it’ll get there.  Tonight for dinner is just a packaged frozen meal. Tomorrow I’m making my Gruyere mac n cheese. That’s all my friends. Take care!

What a cutie pie! I’m glad your brother thinks of her as his own and that the whole family loves her!

Looking at her face straight on and your profile picture she looks somewhat like you.  Similar head shape and I think you may have mentioned you are a redhead?  Doesn’t matter about the dna.  You don’t have to be a biological father to be someone’s dad.   😊