Betrayed is too strong.  Too dramatic.  No one is dying. But the anger-covered heart break is real.  The promise wasn’t kept.  And I’ve always been able to trust God.

This was the conversation.

“You said if I do these two things for six months, the change would happen.  It hasn’t.”

“Now you have the tools you need.  Use them.”

” I thought it was going to be like biting my nails.  I didn’t even notice I had stopped biting them until you pointed it out.”

“It will take the effort it took to accomplish the other two things.  What did you ask for?  You’re getting it.”

What did I ask for.  I remember.  And I remember why.

It had to do with the weight I put on decades ago, when I was in my forties.

I gained 60 pounds (27 kg, 4.27 stones) in less than three months.  I was not ill.  Not physically.  I was driven by someone saying the wrong thing in the wrong place and could not stop eating.  Every day I ate until it hurt.  And when it stopped hurting I started eating again until it hurt.  I ate, and ate and ate until I’d gained sixty pounds.

That was the first sixty. Then a decade later, I gained the next forty (18 kg, 2.85 stones).  For a different, but related, reason. 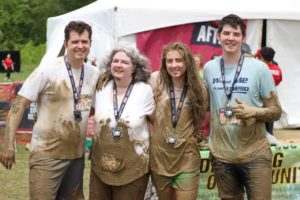 Here I am in all my 100 extra pounds glory.  I chose this picture on purpose.  I’d just finished a “Mudder” run with my son and a couple of my grandchildren.  I might be fat but I’m a healthy fat.

On my last visit my doctor said, “Really good numbers.  You are very healthy.”  He said that with a pleased smile.  I pointed to the weight number.

Seriously?  What kind of doctor goes “pffft” when looking at a number that is 100 pounds over a decent weight? He disappoints me.  I like to belittle my doctors for focusing on weight instead of health and he didn’t.

So what did I ask for?  What was said that made me gain first sixty and then forty pounds?  And what do I have to do to get that promise?  Even more important, why do I want it?

And why am I telling you this, dear Open Diary?   Coming up.  After I get home from church.

Weight is a beast.

sometimes even God will say ‘No’ and often for reasons we do not understand. or He may say ‘Later’ or “try Harder’ or even “love who you are already”.