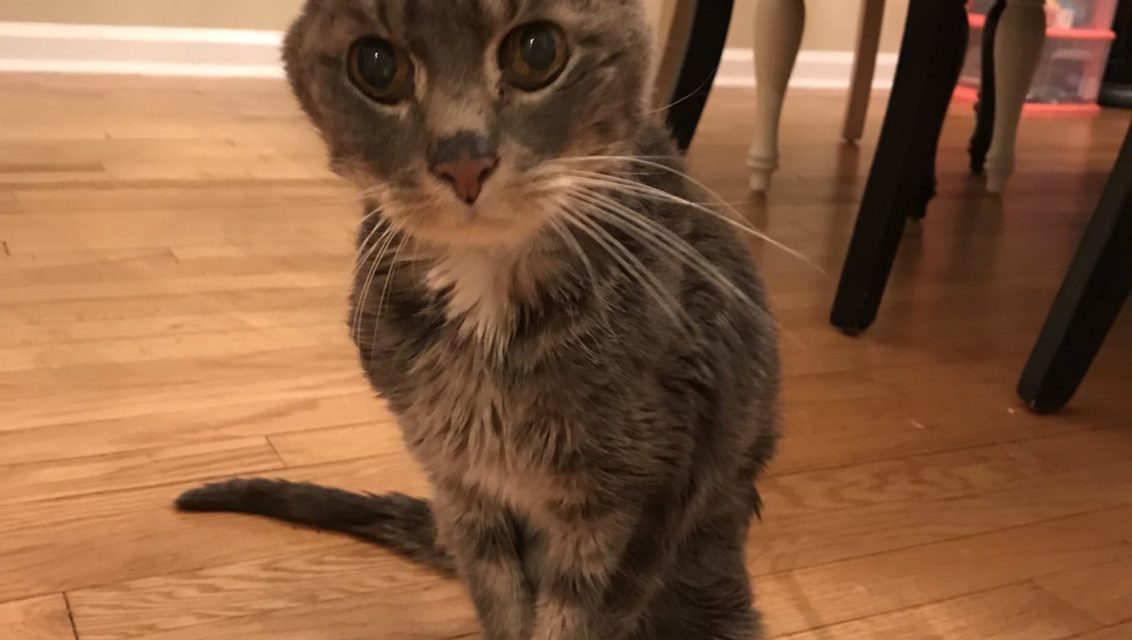 This is Kooshie (literally just took this photo). My wife adopted him and his brother Gizmo as kittens while she was in college in 2000. In the summer, he will be 18.

Kooshie has had a rough few months. He is on pills to help prevent him from throwing up, 150 milliliters of fluid injected under his skin daily (by yours truly), a diaper to protect our furniture from his behavioral issues of spraying (him and his brother both have spraying issues — and diapers — and are fixed… apparently it is an issue with about 10% of cats), and a maple-tasting medication mixed in with wet food to help with constipation.

A week or so ago, my wife was convinced Kooshie was close to death. He was down to five-and-a-half pounds, wasn’t cleaning himself, and disheveled. He also perpetually had wet food stuck to his nose. She thought this was the end and he should be euthanized while he still had some of his dignity. We had a vet come over to inspect him and she said it might be time. We scheduled a house call with her for Thursday, June 18th. This was on Wednesday the 10th.

I find Kooshie and his brother, Gizmo, to be pains in my ass. Mostly with the spraying. The diapers helped with that, but then they would just sit on something (like a blanket) and that would smell like cat piss. Basically, everything in my house is covered in blankets and we do a ton of laundry.

It was odd having scheduled Kooshie’s death. It didn’t feel right. My wife loves this cat more than most things. definitely more than me. As the day loomed closer, I paid more attention to him. He didn’t seem uncomfortable or near death to me. Sure, he was super skinny and a little less sure-footed. But he still laid out in the sunshine most of the day. He still wanted food and ate his fill. He still wandered around the house. I didn’t think we should put him down. I didn’t want the regret and I didn’t want my wife to feel regret. I felt I needed to say something to her. So I did…

She got angry. Very angry. She needed me to support her and not cast doubt. This was one of the hardest things she had to do and me speaking up made it worse.

Kooshie’s last week we stopped giving him the fluid injection. We stopped having him wear a diaper (and hoped for the best). We still gave him some meds for the puking, but that was about it. The day before he was going to be euthanized, my wife weighed him. He was six-and-a-half pounds. Since taking off the diaper, he cleaned himself a bit more and didn’t smell. He acted feisty with her. She called the vet and canceled.

So Kooshie is still with us. We have an urn that is in a box. I have a little Willow Tree statue of a girl and a cat that I ordered for my wife that I was planning on giving her. We bought and read a book to Emily called Death is Stupid so we could explain things to her when it happened.

I don’t know how much longer he will be with us, but I think we will know the right time. This wasn’t the right time. I knew it wasn’t. I had to speak up. I’m glad I did and though my wife was mad at me, I think she’s glad I did too.

It’s never easy to know when is the right time. When you think your pet is suffering, as your wife did, making the suffering stop seems the right thing to do. I’m glad the second chance you gave him is working. My fifteen-year old girl is in great shape, and her former sister (not actually related), who now lives with my daughter, is eighteen, and those sorts of decisions are certainly in our future. I’m hoping they both last as long as my old cat Maggie, who made it to twenty years old. She was only sick for about a week, so her life was a good one and things went quickly at the end, with little suffering. I hope the same for Kooshie — a long life with love surrounding him.

@singer Thanks, yeah, it’s hard to tell. Especially with Kooshie because he always looked sorta depressed and doesn’t meow much. Definitely don’t want him to suffer, but I don’t think that is the case. I wish your cats a long and happy life. 😊

@mauteri And if it helps, always remember that we outlive our pets (and therefore are condemned to mourn then) so that they don’t have to outlive us and suffer the loss of their life companions.

You did the right thing. All the diaper talk is convincing me to not get another cat, though.

@MikeAtari” I really feel it was good that you talked to your wife, even though angry, she had the days to see “some” improvement. I am glad Kooshie seems to be doing okay at this time. 🙂

@butterfly4him Yeah, it was tough to bring it up. Glad I did though. He still seems pretty fine to me.

@mauteri : This is so good!! Does your daughter love him/ both kitties a lot? I’m a gramma, and I know it’s hard on them, to when kitties or pets in general, go across the Rainbow Bridge. awww…../// I’m watching on the internet, we “might” have a government shut down.

I love the title of that book, Death is Stupid. Thanks for this.

@sleepygene Yes, my wife met the author at a conference she attended.

It’s so hard to make that decision. I spent over $1,000 to make sure it was Medhia’s “time” and I’m still not sure if it was the right decision. Thankfully, you have been blessed with more time. Kooshie is so adorable.

That’s wonderful that Kooshie had a turn around.

@axalotal Thanks! Yes, it’s certainly a hard decision to know when since it can be hard for cats to tell you exactly how they feel.

If I hadn’t owned a cat once, I’d question going thru SO much trouble. I’m almost tempted. BUT, I’ve had one and I understand. I also have a wife, so ditto again – but with a quantitative amount of understanding. Of mine, and yours.