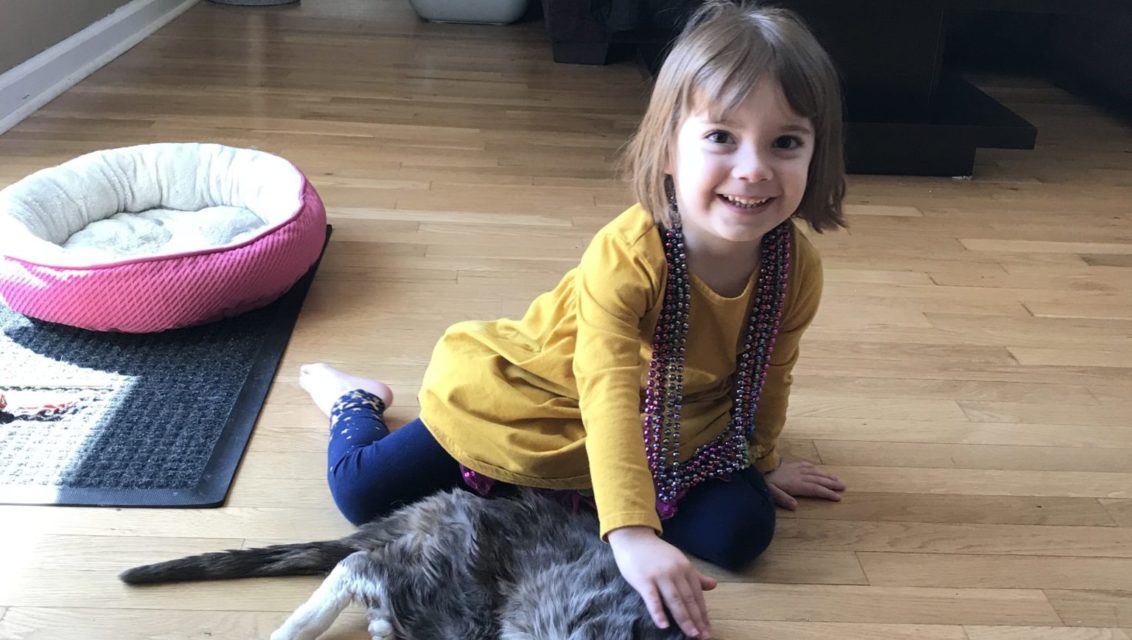 I wrote about our cat, Kooshie, here and here. In that second “here” I mentioned how we scheduled Kooshie’s euthanasia appointment, but canceled after he started looking like he still had some life left in him. Unfortunately, Kooshie got worse again…

Last week we noticed he was not so good on his feet and having all sorts of trouble. On Saturday, we called the vet again to schedule his appointment. The vet said we could do it that day, Tuesday, or Thursday. My wife wanted to do it right then and there as she wanted to put him out of his misery. I didn’t think he was that bad yet, so suggested we schedule Tuesday. Also, I wanted to better prepare my 3-year-old daughter if I could. We went back and forth on it for a few minutes, and eventually I got her to agree with me. So Tuesday was going to be the day.

Saturday night and Sunday were awful. Kooshie got worse. Started crying. Tried to pull himself under the bed in a very odd way. At one point in the night I heard a thud. Kooshie just threw himself off the bed onto the floor. This cat was the most graceful cat I’d ever met and he literally just threw himself onto the floor with a thud. My wife was pissed at me for not agreeing to schedule the appointment on Saturday like she suggested. I had no idea how quickly this cat was going to deteriorate.

On Monday, I said we should contact the vet and see if she had time that day given how quickly Kooshie was going down hill. Luckily, she had time between 11:30am and 12pm. So we kept Emily home from school, so we could all be with Kooshie and say our goodbyes.

Monday was very sunny in New Jersey. One of Kooshie’s favorite things is to lay in the sunshine that comes in through the sliding glass door in our backroom. I decided to carry his little cat bed from our bedroom which he’d been relaxing in to that spot so he could enjoy it one last time.

The vet came at around noon and we started the process. We all sat around him, pet him, showed him our love. Kooshie was so skinny and dehydrated that the vet couldn’t get the needle into the vein in his legs. Instead he got the dosage into his abdomen, which isn’t any more painful, but takes a few more minutes to take effect. Kooshie died in the sunshine he loved around the people that loved him. It’s not the same without him. He was the kind of cat that was always on the bed when we were. My wife particularly misses him resting on her chest or laying up against her while she read before bed.

As much as we tried to explain death to our daughter, Emily. It’s not quite sinking in. She’s still convinced that Kooshie is just with the doctor because she saw the vet take his body with her when she left. She also told her preschool teacher that one of her cats isn’t at home right now. It hurts to tell her that Kooshie died and he isn’t coming back. It kills me to say it. I know I’m not doing her any good not being truthful with her, but it’s still hard. Death is stupid.

@wildrose_2 Yes, it’s hard. We actually have a children’s book called “Death is Stupid” that we read to her to try to explain at her level. It helps but it doesn’t because trying to explain death seems like a concept she doesn’t quite fully grasp yet. Plus, I hate having to take a piece of innocence away from her, because like death, that doesn’t come back either.

@wildrose_2 And thank you for your kind words!

This breaks my heart 🙁  -hugs- To you and your family.

This is such a sad story, but you all did what was right for Kooshie, sorry that it had to end that way, but at least it ended peacefully.

Three is awfully young for realistic thinking.  I look at Emily’s sweet, innocent face and I remember a little pre-school aged girl who solemnly told me, after we saw a hawk carrying a rabbit in its talons through the treetops in the twilight, “Maybe that hawk was just taking that bunny for a ride.”

“Yes, honey. The hawk is probably taking the bunny home for dinner.”  There’s a reason we show children cartoons.

Sorry for your loss.  It’s very hard to lose a good animal friend.

I have three cats and my oldest is 12 now. In my adult life I have not had to put an animal to sleep yet. I dread having to make that first decision. I am so very sorry for your loss.

So sorry for your family’s loss.  You did the right thing.  And even if she doesn’t fully understand now, you’ve built a foundation of comfort and compassion with death by not hiding it and including it as a part of life.

Thanks you everyone for your kind words!

Just curious as why you wanted to friend me?

@mentaldysplasia I read a few of your entries last night and thought you were worth friending.

Awesome!  Well, I am glad that you like those entries, and I hope you will like many more to come.

I had tears in my eyes when I read this. We had an experience like this three times. It’s never easy. Especially whe there are kids involved. My thoughts are with all of you. Rest peacefully Kooshie. ((Hugs))

We are petless now after putting down many cats and at least two dogs.  I just cannot take it anymore.  I love them so much and it is hard to say goodbye.   I have no advice for how to tell a child.   I had to tell my 4-year-old son that his grandpa died and it was so hard.   He kept waiting for him to come back too.

Haven’t heard from you in a while.  You OK?

@mauteri   Good to know you are still among the living.  I’m pretty good for an old broad!!