Yesterday was, without question, the most amazing day I have ever had in a relationship.  It began early, which is unusual, because Drew usually sleeps late.  Unfortunately, with all the meds he’s on due to the spine surgery, he hasn’t slept much in the past few days, so he hasn’t slept at all in at least 48 hours.

We got up, got showered, and decided to go out and do something.  Other than restaurants, grocery shopping, and doctor appointments, we haven’t gone out since shortly after I got out of the hospital from the encephalitis.  We don’t know many people here, we are both out of shape, he is in constant pain and I can’t walk for extended periods of time.

We went to the State Farmer’s Market.  We had breakfast at the restaurant inside the market.  After breakfast, we pulled the wheelchair out of the truck, and proceeded to scoot around the produce part of the market.  Bending to push the chair, was hard on Drew, so I propelled myself with my feet and my arms.  We looked at the local produce, and ended up in the bakery, where we found a German bakery.  Having lived in Germany as a child, and then traveling there as an adult, I have been looking for a good source for brötchen for years.  I chatted with the owner for some time.  He was excited to have a new customer.  I was excited by the thought of warm, fresh, crusty-on-the-outside-soft-on-the-inside bread rolls with bratwurst.  Oh, the nostalgia!

We live kind of out in the country.  Our street looks like a regular suburban neighborhood, but we have to drive some winding, wooded roads to get here.  I was trying to read something on my phone, and I started to feel car sick.  I lay back in the seat and closed my eyes until we got home.

Once we got here, I tidied up the kitchen a little bit, but I started feeling a little off, again.  This isn’t entirely unusual.  It’s one of the things I’ve just learned to deal with since the encephalitis.  I sat down at Drew’s encouragement, and we watched a little TV.  When I felt well enough, we went upstairs to take a nap.

I didn’t think I’d actually sleep.  I played some games on my iPad, and let Drew try to sleep.

Between his surgery, the hospitalization for his bowel blockage that came a few weeks later, his pain, his pain meds, and my crazy cycles due to perimenopause, we haven’t really been able to make love for a while… until yesterday afternoon, that is.

It was the most amazing time I have ever had with a lover.  We spent hours pleasing each other, whispering to each other, loving each other.  I’m sure you probably think I’m exaggerating, but I will never forget October 6, 2019, ever.

In 2007, I was lonely and frustrated.  I’d only recently begun to realize that no one in my life had ever loved me the way that I had loved him.  No one put my needs before theirs, ever, including my own parents.  I’d been married and divorced.  I’d thought I’d found love with Rick, but when our relationship became inconvenient, he threw me in the trash like a disposable fork – good for a couple of uses, but nothing you’d keep forever, and easily replaced.

At that time, I had discovered a website called Literotica.  It’s amateur erotica, and I was looking for stories to satisfy that … you know… urge.  😉  But I couldn’t really find stories that worked for me.  They were either poorly written, crude, or dumb.  So I started writing my own.  I’d written a few and submitted one.  They published it and it got good feedback.  So I wrote a second one.  It was published, but it wasn’t received well, due to subject matter.  So I wrote this entry.  The first two were pure fiction.  The third one is 100% truth.

If you read it, I’ll just say that yesterday fulfilled all of the important parts of that fantasy.  For the first time in my 48 years on this planet, I was able to give in and ask for what I wanted without feeling embarrassed or ashamed.  And Drew absolutely loved it!

We never did take a nap.  Later, we got dressed, went downstairs to take care of the fur kids and have dinner.  During dinner, I remembered having written that story.  I told him about it and then gave him the link.

He seemed a little distracted by TV when he read it, which caused me to wonder if I’d misread him.  He didn’t comment.  I decided not to mention it.  We went to bed around 11:00.

I sleep with oxygen and a wedge under my knees.  It’s not exactly romantic.  But once we were settled, Drew snuggled close to me, which is not easy because our mattress is trash and there’s a giant hump in the middle.  He looked at me and said, “You didn’t say anything after I finished your story.”

I felt awkward like a kid, again, and stammered out, “I… kind of hoped… you’d notice… some parallels between that story and this afternoon.”

He said, “I did.  I absolutely noticed.”

I said, “That was the first time I’ve been able to talk like that, to ask for what I want and say what I’m thinking and just let go.

“I had no idea.”  He scooted closer to me.  “That makes it all so much more wonderful.”

We spent at least another two hours talking about how good we are together, how much we love each other.  We talked about how lately, we’ve both noticed that it’s just been especially good.  I thought with him being home due to surgery and working from home, so no traveling, we’d get on each other’s nerves.

On the contrary: he’s striving to get up earlier, which has been the only real complaint I’ve ever had.  I’m a morning person.  The earlier I get up, the better I feel.  The more I accomplish.  He’s been setting an alarm even when we have no where to go, just to be up and functioning with me.

We talked about all of these things.  We joked about how sore we’d be (I am) today.  I jokingly said that we’d have to build a special sex dungeon for gimps, with handrails and swings.  “I’m going to design a special placard for our disabled fucking spot!” (see below)

I laughed until I hurt.

He said, “why did we have to waste so much time with the wrong people?”

My philosophy on that is that each of those “wrong” people were learning experiences.  They are what made us who we are today, and they are why we appreciate each other so much.  But I just said, “Better late, than never.” 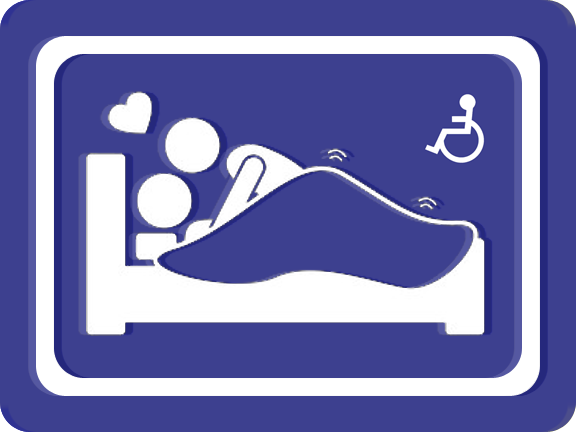 Awesome! I love this!

I’m glad you and Drew has such an amazing, romantic day. It definitely sounds very well deserved.