This weekend was pretty much a total loss.  After Donal dropped his bombshell, I spent the whole day, Saturday, riding out waves of anger, sadness, and frustration.

I talked to my mom about it.  She couldn’t stop apologizing to me.  I don’t blame her for any of this.  In fact I thanked her for training me from early on to be wary of men.   It saved me from being even more seriously damaged by my grandfather – Donal’s father.

Talking to her didn’t really make me feel any better.  She said it sounded like Donal was blaming Kendra’s mother for his behavior.  I found myself defending him because I don’t think his brain works right.  Then that made me feel like shit because he molested my sister.  To Hell with him.

I may or may not have mentioned that one of Drew’s pain meds gives him horrible hives, so he scratches all night making it hard to sleep.  He hasn’t slept in several days, and I’ve only managed a few hours here and there.  I could not sleep at all that night.  I was obsessed with finding my sister, and I think I may have succeeded.

I had to subscribe to one of those shitty people-finder websites, but I found a Kendra whose last name and middle initial match my sister’s.  She was born in 1980, which is the year I believe Kendra was born.  She was born in the same city in which my brother who passed away lived with his wife and son.  She also lived in LA, which Donal suggested was a possibility.  The site gave me an email address and a mailing address.  I’ve already emailed her, but haven’t heard anything back yet.  I’ll mail the letter, today.

Here is the text of that email: 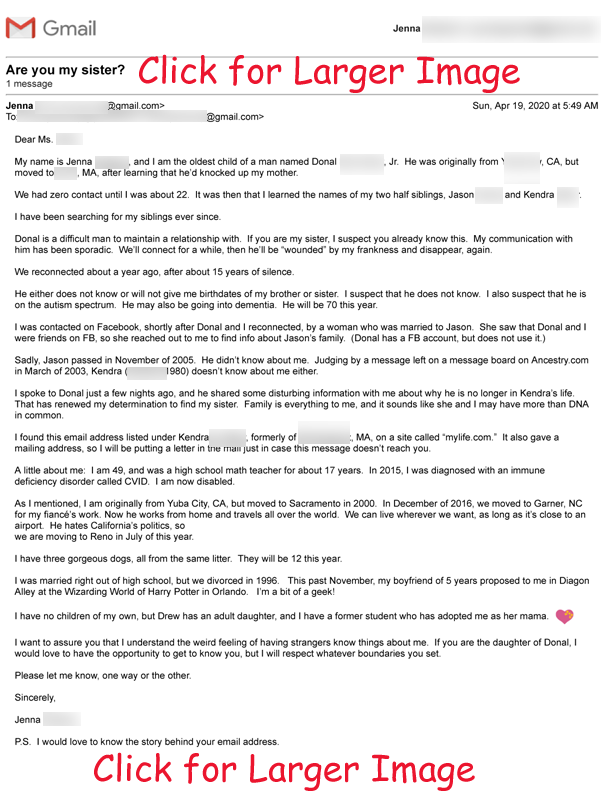 I have not heard back from her as of yet, but there’s still the snail mail that I will be sending her.

I still didn’t sleep well, even after sending the message.  I got up and fed my dogs then made my morning smoothie.  I had two video chat dates set for Sunday.

The first was with Theresa, a fellow former teacher who recently retired.  She and I have been friends for about twenty years.

Actually, the truth is that we have known each other for about 20 years, but around 2008, she said something to me that made me feel less important than her, and I decided to take a break.  We didn’t speak again until 2012.

Since then, we’ve been close again.  She retired last school year, and  bought a house in Idaho.  She doesn’t know anyone in Idaho, and she hasn’t been in a relationship in decades.

Yesterday we had our weekly video chat.  I think she was in a mood, because anything I mentioned liking, she didn’t like it done that way.  She can be like that, and I’ve learned to live with it.

Then came the slap across the face.

She’s reading a bunch of conspiracy blogs about who caused the pandemic.  She’s calling it an issue of freedom.  I keep hearing this word in conservative circles.  They only care about their own freedom, no one else’s.  (And of course, I don’t think all conservatives are this way, but, currently, the loudest conservative voices are the wingnuts).  My friend has become a wingnut.  She told me that she’s ready for the quarantine to be over.  “If you’re vulnerable, stay home.  We need this for our mental health.”

I’ve learned that when she’s expressing political opinions, I’m better off keeping my mouth shut.  I could have pointed out to her that as a fellow math teacher, she should understand how exponential growth works.  She should understand that even if I stay home, if people who are asymptomatic are delivering my groceries, or my mail, I’m dead.

I don’t just have a compromised immune system, I have a lung disease that has led to numerous hospitalizations over the years.  Something like Covid would kill me.  I have trouble when i go out.  I feel like I can’t get my  hands clean enough.  I’m afraid that I’ve finally found the man of my dreams and am about to have the life I have wanted for nearly 50 years, and this virus comes along to take it all away from me.

And this person who is supposed to be my friend; who has visited me in the hospital over the many times I’ve been there; who tells me she loves me every time we talk, looked me in  the eyes and said, “If you’re vulnerable, stay home.  I need this for my mental health.”

I need this to stay alive!  I have no choice in my health condition.  I did nothing to cause this.  She chooses to be alone.  She chose to move away where she doesn’t know anyone, but, hey, let’s go ahead and execute all the compromised folks, so that she can go have bacon at a restaurant.

Adina and I talked last night.  That was my other video chat.  I shared with her most of my frustrations.  She shared hers.  It was good to talk to a friend.

Last night was another rough night for sleep.  Drew is still struggling with the hives and he woke me several times. (I’m a VERY light sleeper).  I decided to get out of bed around 7:30.  It was then that I noticed I had a couple of texts from Adina.  She had a bad dream that we were fighting, and she needed to hear my voice.

I called her right away and she told me all about the dream.  To me it was very clear what the dream was about.  When I gave her my interpretation, she agreed that I was probably right.

It was so good to talk to her first thing in the morning, like that.  We joked that she and her sister-in-law should move to Reno with Drew and me.  Bring the kids but leave her brother behind!  I really mean it and I know she would love to, but not just yet.

Anyway, it definitely feels like she and I are back to where we were before Bob (whose birthday is today) Godzilla’d our happy home way back when.

When I hung up from her, I had a text message from my wonderful next door neighbor.  She knows about my health issues and has offered to pick stuff up for us if we need it.  We are able to get all of our groceries delivered, but no one has toilet paper.  I had asked her if she could pick some up for us the next time she goes to the store.

Her message was that her son (who also mows our lawn) had run to Walmart and found our brand!  He bought it and brought it home.  “Do you want him to bring it over?”  😁

At noon, I tutored Adina’s sister-in-law, Crystal online.  She’s doing great in her algebra class, but there is no instruction.  She’s just supposed to teach herself from the book.  So I go through it with her and she gets it all right away.

Now it’s 3:30, and despite the lack of sleep, I feel amazing.  There is always more good than bad, if you look for it. I think it came looking for me, this time.

Some people just dont get this isolation thing. I am so afraid to get this illness. I really dont think I would survive it. It scares the heck out of me. It amazes me just how many people are making this about their constitutional rights…..when that really has nothing to do with their rights.  I am so glad I was born with a heart and understanding. You need to take care of yourself as well. It isnt easy to go through this but if that is what it takes I have no problem with it.

Glad you think you found your sister. I hope she reaches out to you.

I am more afraid of dying from this so I will be staying home till I know either we have total control with this or there is a vaccine which ever comes first.

I really hope you found your sister and she is a lot like you.

Question?  is there some cream Drew can use for his rash and hives?  Maybe he has an allergy to the medication?

@jaythesmartone I’m trying, and we’re trying to find some cream for Drew.  He is allergic to the meds, but the paid without them is worse than the itch.

I hope something is found for him and his pain does subside.

Yeah, I just can’t tolerate the conspiracy shit. I just will never understand the idea of money being more important life. It’s a way of thinking that goes over my head. I think there are people who are thinking short term solutions and then there are the people thinking long term.

I hope that you did find your half-sister and I hope she writes back to you.

I hope you’re able to get in touch with your half sister. That would be great :).

COVID-19 is a very scary illness for many people. Stay inside, wash your hands, use hand sanitizer, and I’m sure you’ll be fine.