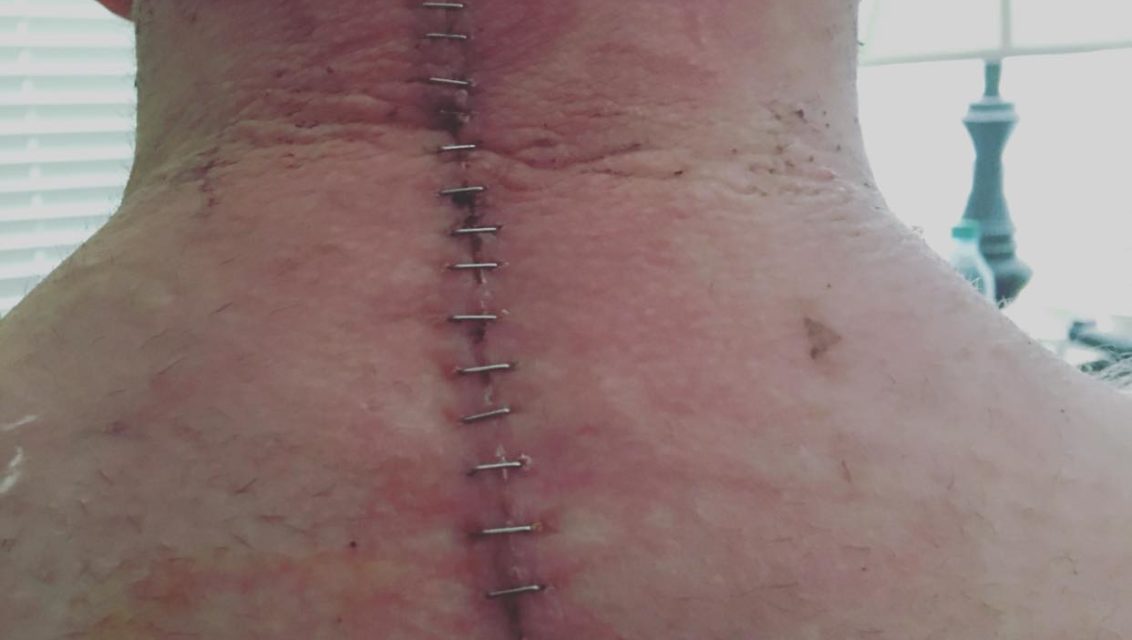 I’m not sure why, but I’ve been having a heck of a time trying to update on what’s been happening since Drew had surgery.  Nothing spectacular, really, but still, it’s rude of me to keep you all waiting for an update, so this is probably my fourth try, now.  I’d ask you to wish me luck, but you won’t know to do that unless I actually finish this entry and publish it.

Since my driving hiatus due to the seizures caused by the encephalitis, I have been reluctant to drive at night.  Because I didn’t want Drew to be alone all day, we thought it would be a good idea to bring his 22-year-old daughter out here to help me drive back and forth from the hospital.  It’s a good 30 minutes drive from the hospital to our house, and if you’re familiar with the Raleigh area, it’s a sprawling city surrounded by thick wooded country communities.

Kaia arrived on the night of the surgery.  By the time we got Lyft to pick her up and bring her here, it was nearly 2 AM.  I let her sleep until 10 or so, then knocked on her door.  She told me she wasn’t ready to go, so I went without her.  She called me a couple of hours later, and was ready to come to visit her Dad.  She spent a lot of time fighting via text with her girlfriend/fiance’.  But it was a good visit.

Last night was quite the adventure!
When we were driving to the hospital, the engine light came on in my van. It wasn’t overheating. It’s only just now due for an oil change. The day before, the tire pressure sensor was alerting, off and on. I thought maybe I had some electrical thing, but I wasn’t terribly concerned.
Since I’m uncomfortable driving after dark, now, Kaia was driving us home from the hospital. It was around 10 PM, and we were exiting the highway to get home. As we were coasting to a stop, my van died. It never does that. Kaia tried to start it again, and nothing happened. The A/C was still working. The flashers worked for a few moments. Then they stopped, too. We were stranded on the exit onto highway 42.
I called AAA for a tow. Then I sent a text to Keith, the owner of the auto repair shop that I worked for when I got sick. I also consider him a dear friend. He called me back right away, and told me to have the car towed straight to the shop.

Now, let me tell you how blessed I am. Of all the dark highway, or thickly wooded streets that we could have broken down on between the hospital in Raleigh, and our house in Garner, we came to a stop on the exit right next to a well lit McDonald’s. A man saw us stalled, walked to the rear of the van, and shouted “put it in neutral,” then pushed us off the exit to the shoulder, then left without any weirdness. Kaia and I were together, which is always better than being alone in a situation like that. The tow truck driver took us to the closest gas station and waited with us until a Lyft came to take us home.

This morning, we will be driving Drew’s truck to the hospital. I haven’t told him about our adventure, yet, so don’t spill the beans. I plan to ease his worry with a cheese danish before we tell the story.

As always, I am so grateful for the love and support. Thank you for the prayers and calls and messages.

Drew is home now.  I had to drive and that was not fun at all.  He’s a horrible passenger, even when he’s not in pain.  He’s definitely not his usual self, though he’s trying hard to be.  He got his staples out, today, and he’s slowly trying to return to work (which means sitting in front of his home computer).

In other news, my disability hearing is scheduled for late October.  I’m hopeful, but not optimistic.  Is that possible?

Glad that it all worked out, sorry about your van!

@thediarymaster Thank you.  The van wasn’t that bad, actually.  See next entry for follow up.  🙂

Wow….the staples in his neck. Glad he is on his way to recovering.

Glad you had help when you needed it too. Thank goodness you weren’t alone.

Is it a hearing for ssd? It took a long time for the hearing process for me, but the hearing went smoothly. I knew when it was done I won. They didn’t tell me. I could just tell by how well the hearing went.  Hope it goes well for you.

Thanks for updating us.

@thespiritwithinme Yes, the hearing is for SSD.  I have an immune deficiency disorder that lead to encephalitis and mini-strokes about 18 months ago.  I haven’t been able to work, since.  Even taking care of Drew has been exhausting me to the point of making me sick.  I applied in February of 2018, after I came out of a three week coma.

@oniongirl it really sucks that the process takes so long. I wish they would come up with a way to make it quicker. I thank God I had savings to help me through. Without that I don’t know what I would have done.  I hope it goes well for you.

So glad drew is on the mend..I was worried about him and the pain he was in.  Did his pain ever get managed?  By the way I can leave comments now…why and how I can not know.

@jaythesmartone I don’t know, either.  Maybe OD figured it out.  But I’m glad!

Good luck with your disability hearing.

Glad to hear that you got everything with the car worked out.

I’m glad that you only dealt with nice people when your van broke down. Hopefully, that gets fixed soon. And I hope that Drew is recovering well.

Good luck with your hearing, I hope it goes well.

I miss hearing from you on here, but I’m guessing you’re pretty busy helping Drew and then your own health issues.

@heffay, yeah, taking care of Drew is a lot, right now.  Usually, he takes care of me.  I’m determined to keep the house clean and make sure the weekly chores are completed.  It takes me a lot longer than it used to to do things like take out the trash before pickup day; or clean the kitchen; or laundry!

But I’m finally getting ahead of it all, so I hope to be writing more soon.

FYI: I hadn’t been able to drive at all for almost a year.  When you have a seizure in NC, you’re not supposed to drive for six months.  When I was at 5 and a half months, I had a second seizure, so I ended up depending on Drew or Lyft or Uber to get me around.