When I was four, my mother married a man she knew from her job at Shakey’s Pizza.  I was so excited to have a “daddy.”  And then I figured out who he really is.  He’s an abusive, alcoholic, who cheated on my mother when she was pregnant with his second child.  He beat my brothers with a belt on a daily basis.  He dragged us to Germany for three years.  He dragged us to Texas for another three.  He was supposed to drag us back to Germany for an additional three years, so he took us back to California and we stayed with family “until he could get us a house.”

Eventually, we wore out our welcome with the family members who had allowed us a place to stay.  We moved into a sleazy roach motel with blood spatter on the walls in a sketchy part of town and we continued to wait for him to find us this illusive, elusive place.

He never did.  He abandoned us.  It wasn’t until my mother filed for divorce that he acted like he gave a fuck.  I was 12 years old, and the son of a bitch wrote me a sad sad letter about how he would miss us and how much my mom was hurting him.  Even at 12, I was savvy enough to know that this was a crock of shit and he was trying to use me to manipulate my mom.  I was pissed and I told my mom that it was a stupid letter.  She told me I didn’t have to keep it, so I threw it in the garbage.

There have been a handful of times since their divorce that he has acted like he cared about any of us.  He was there for my wedding.  He was there for my sister’s graduation.  He was there for Dave’s funeral.  Called and sent a lot of messages when I was in the hospital after the encephalitis.  He’s never made the slightest effort to be a grandfather to his six grandchildren (8 if you count my other brother’s two kids).  He doesn’t acknowledge their birthdays or Christmas. 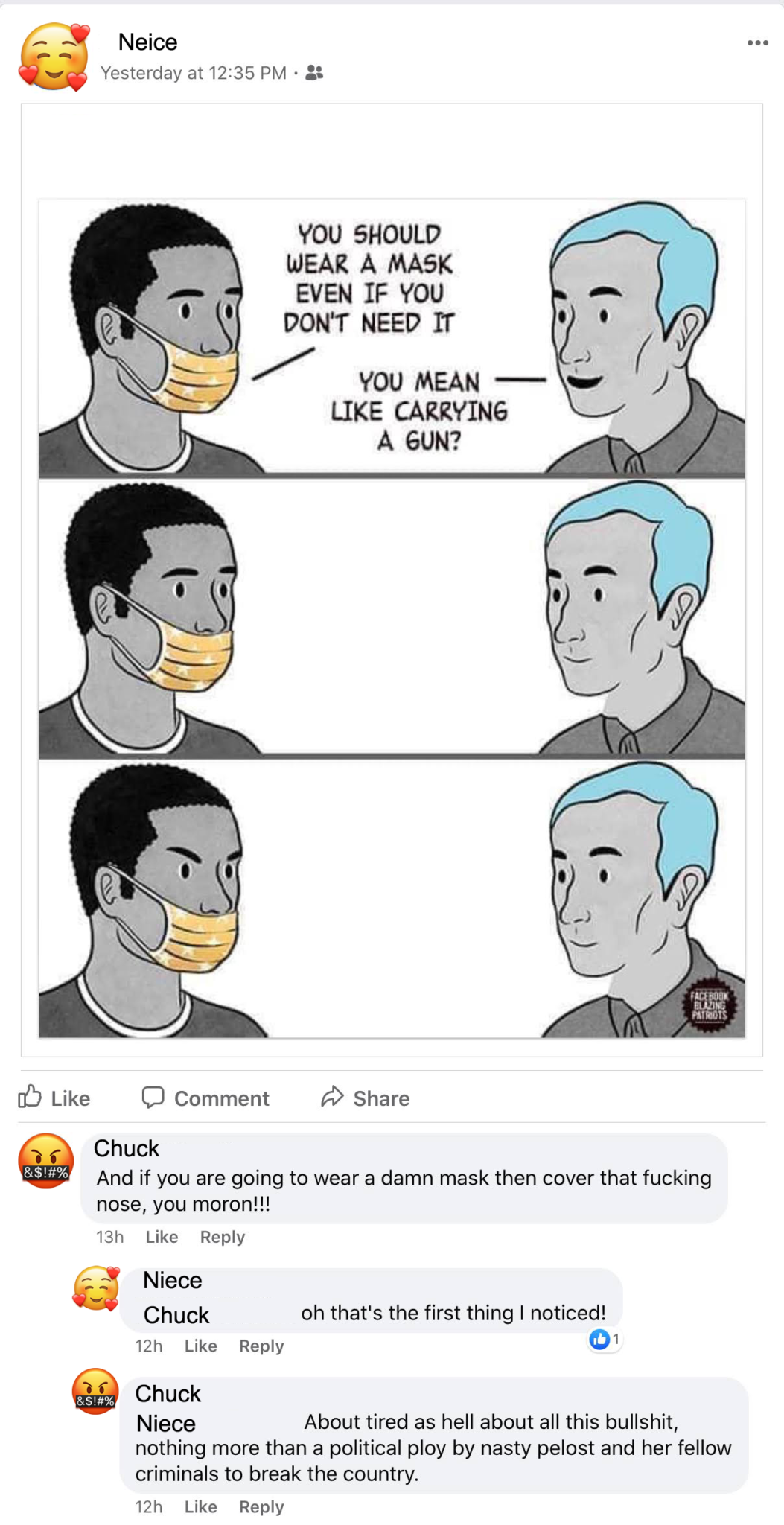 I could go on and on about all the ways he was a terrible “daddy.”  But I have other things to do, today, so I just wanted to share what set me off.

Pretty much since Trump started campaigning for president, Chuck will comment or leave an angry emoji on anything my sister or I post on Facebook. (My brothers are also Trump supporters).  He never comments on the good things happening in our lives.  He never shows interest in his grandchildren or their accomplishments.  Yet he doesn’t miss an opportunity to rant about Libtards and rave about Trump.

I know I’ve written about this, before, but it hurts me when people who claim to love me put their politics before their health and the health of others.  I am a prime target for death by Covid-19.

I am not even a little bit anti-gun.

This cartoon is stupid.

Someone telling others to wear a mask is not going to be wearing their mask inappropriately.  But that’s a minor issue to me.

The major issue is that this is an idiotic comparison.  Wearing a mask isn’t going to kill ANYONE.  If it could kill someone, it would have killed me.  I have chronic lung disease.  My lungs are eating themselves. Wearing a mask makes me feel claustrophobic, but so does a bra and I wear one of those when I go out.  Neither will kill me.

On the other hand, a person who carries a gun in public can kill someone.  Most of them probably won’t, but it could happen, either accidentally or on purpose.  Frankly, I suspect that many of them are looking for an opportunity to do so.

In any case, to compare carrying a gun to wearing a mask is the epitome of stupidity.

I seriously considered blocking him, but I was overwhelmed with guilt that I might hurt him or hurt my siblings who still consider him their dad.

This is my dad.  He and my mom have been together for 37 years this month.  They’ve been married 35 in November.

It hasn’t always been wonderful.  There was drugs, alcohol and violence in our home.  But ultimately, he loved our mother and us enough to keep trying.  He treats my mother like a goddess.  I believe he’s the reason my sweet niece who was raised by him and my mom has turned out as well as she has.  She certainly found a good man to have this gorgeous baby with.

This is what love looks like.  Not guilt trips.  Not lashing out at family because they don’t agree with us.  Love is working through ugliness to arrive at absolute beauty.  I always wanted a daddy.  I got mine when I was in my 30’s.  I wouldn’t have it any other way.

that is a great pic! I am glad he kept trying. The cartoon is… no words for the level of stupid… it’s beyond the stupidity scale… it is trump stupid level and that is a whole different thing

Cool pic of your dad, life isn’t always sunshine and rainbows. I barely knew my dad. (see the chapters on my blog)

@littleavocado My dad is not my biological father.  My biological father ran off to the opposite coast when he found out my mom was pregnant with me.  When I was 12, I met his father.  After a visit or two, he tried to molest me.
I finally met bio dad when I was 22.  He gave me a poem he claims he wrote when I was born.  It was called, “For my Son.”

In the 27 years since, we have seen each other maybe five times.  His brother and sister are closer to me than he is.

He is also a child molester.

The man in the picture married my mom when I was 14.

As an adopted member of your family, your mom’s ex has yet to reach out to me. Uh, thanks dude. So I have beef with him as well.

Decisions about wearing a mask or not really comes to where they value certain people. There are those who say the elderly don’t have much time left, so whatever about them dying. People who choose not to wear a mask are saying their comfort is more important than the lives of anyone around them.

Also… I want to punch everyone who thinks it’s some democratic conspiracy. I ranted about this on Facebook a while back, but how are any politicians benefitting from this? Unless some politicians are taking a lot of money from toilet paper companies. Massive job losses, lots of death, suffering economy. Ugh.

I agree with you on this. Your mother’s first husband us by no means a daddy. Thankfully she was able to find someone who loves enough to try all those things for all of you.

“I am 100% anti-stupid.”
I’m with you there.
I am especially unloving toward the stupid who are aggressively and self-righteously proud of being stupid.