Skip to content
There are so many paths that I have taken on which I have observed what I conclude to be magic at the core.  I’m going to re-tell a story in which I hadn’t realized all of the magic involved when I told it the first time.
It began in 2008, when I was buying a home in Sacramento, CA.  As a single woman, I wanted a larger dog for protection.  I hadn’t had a dog since my beloved Magnum had passed away about three years before.
So when I found a rescue dog who immediately took to me like we’d known each other forever, I knew that she was the one.  She was a shepherd mix of some sort, with short legs and long hair.  I adopted her and brought her into my apartment, as I waited for escrow to close on the house.
It didn’t.
About the same time that I realized that I would not be getting the house I’d planned to get, I learned that my beautiful Katy-girl was not just fat, but she was, in fact, very pregnant.  Despite the fact that I was living in an apartment, I was excited about the thought of having puppies in my life.

10 days after the vet confirmed that she was pregnant, Katy gave birth to seven puppies.  She did her best to have them on my bed, but I kept her in a whelping box, and was there to catch each pup as it made its way into this world.

Sadly, Katy’s life before me had not been good, so only three of the seven pups survived.  I planned to keep one, the girl, whom I named Despereaux, and find good homes for the other two.  Assuming that their new home would want to name them themselves, I just called them “The Chunky Puppy,” and “The Other Puppy.”

As time to rehome them grew closer, the panic inside me grew.  I’d never had puppies before.  No one ever told me how to not fall madly in love with them.  They were beautiful, boundless bundles of absolute joy, and I needed that so much at that time.

I couldn’t do it.  I bought a house in an “unsavory” part of town because I was a single high school teacher and couldn’t afford much, and it had a quarter acre for my babies to live and play on.  I kept them all: Katy-Mama, and Despereaux; “The Other Puppy” became O.P., pronounced “Opie;”  and “The Chunky Puppy” became “Chunk.”

A few years after I moved into my house, my health took a dramatic downturn.  I lost my job, and slumped into quite a depression.  My dogs gave me a reason to get out of bed in the mornings.  No matter how low I felt, they were always there to kiss me and love me even when I barely had energy to feed them.

I was finally diagnosed with an immune deficiency disorder in 2016, and my health improved dramatically with proper treatment.  I had also met the man of my dreams and we moved to North Carolina for a job offer that he couldn’t refuse.  With an immune disorder, teaching in a classroom was no longer an option for me, so I took a job as a book keeper at a small auto repair shop in Raleigh

It took some time to earn health benefits from my employer.  I could not afford the IV infusions that I require to maintain a normal immune system.  In December of 2017, I came down with encephalitis and had a series of mini-strokes.  I am now disabled.

My fiance’s job has changed to a work-from-home position, so we had been planning the move from NC to NV for several months before Covid barged onto the scene.  NV is closer to family, so it seemed wise to move there for my health.

My dogs are old, now.  Opie and Despereaux will be 12 years old on December 21.  Chunk, sadly, did not make the journey from NC.  I am responsible for his death, because since the encephalitis, stressful situations cause memory and decision-making issues.  I left my babies in the van for a moment, and the moment slipped away from my damaged brain.  I cannot describe the scene when I returned to the van.  My three beautiful mutts were in serious distress and it was my fault.  Fortunately, other people who could think were there and could take control of the situation and get them cooled down.  We thought they would all be ok, but though Chunk seemed to be doing all right, he was gone within a few hours.

We left Chunk’s remains at a vet in Nashville to be cremated and sent to our new address.
These dogs are the only babies I will ever raise.  I am unable to have children of my own, and at nearly 50, it’s too late to, even if I could.  I wept and cursed myself all along the road that day and into the next.

And that’s when the magic began to show itself.

I lay in bed that night, trying to make the pain stop.  I thought of the pets that had preceded Chunk in death who might be waiting to greet him at the Rainbow Bridge.  There was Katy, his mama.  There was Magnum, my first dog, and Tootsie, my roommate and best friend’s chihuahua who loved to steal the tennis ball from Chunk when we all lived together.
And then my  Beloved Papa popped into my head.  Papa had been my mother’s stepfather and the only man to remain consistently in my life from my birth to his death, just a few years ago.  I saw him, walking Chunk across that bridge, and I felt joy.  Papa loved me and I have no doubt he would love my dogs just because they were important to me.

That thought made me happy, so the next morning, I took Opie and Despereaux to a little dog park in the corner of the parking lot of our hotel room.  While they were sniffing and pooping, I was texting my mom about my vision.

Papa and I had exactly that kind of relationship.  Ornery was a good word for him, but in the best possible way.  I have no doubt that he heard me and laughed in my ear.  It was probably my first smile since Chunk’s departure.
At our first stop upon leaving Tennessee, we stopped at a gas station.  I went inside to get some water and the cashier said, “I hope you have a great trip.”  I grumbled something in my heart, and headed out the door, where I saw a picture of a wolf just above the door handle.  For some reason, that picture took my breath away.  I thought of Chunk, and it didn’t hurt quite so badly.
As we drove through Wyoming, I watched the scenery go by.  I replayed the events of that morning in my head, and began to feel the guilt and grief washing over me again.  My fiance tapped me on the knee, and said, “Babe, look.”

On the left side of the road on a bluff, sat a huge sculpture of the silhouette of a wolf.  I felt Chunk nudging me with his gigantic nose the way he often did when he wanted attention.  “Ok, Buddy.  I’m listening,” I thought.

The next stop was at another truck stop.  With a compromised immune system and in the midst of a pandemic, I walked briskly straight to the restroom.  There in front of me was a dream catcher displayed on the wall.  Not just any dream catcher, though. 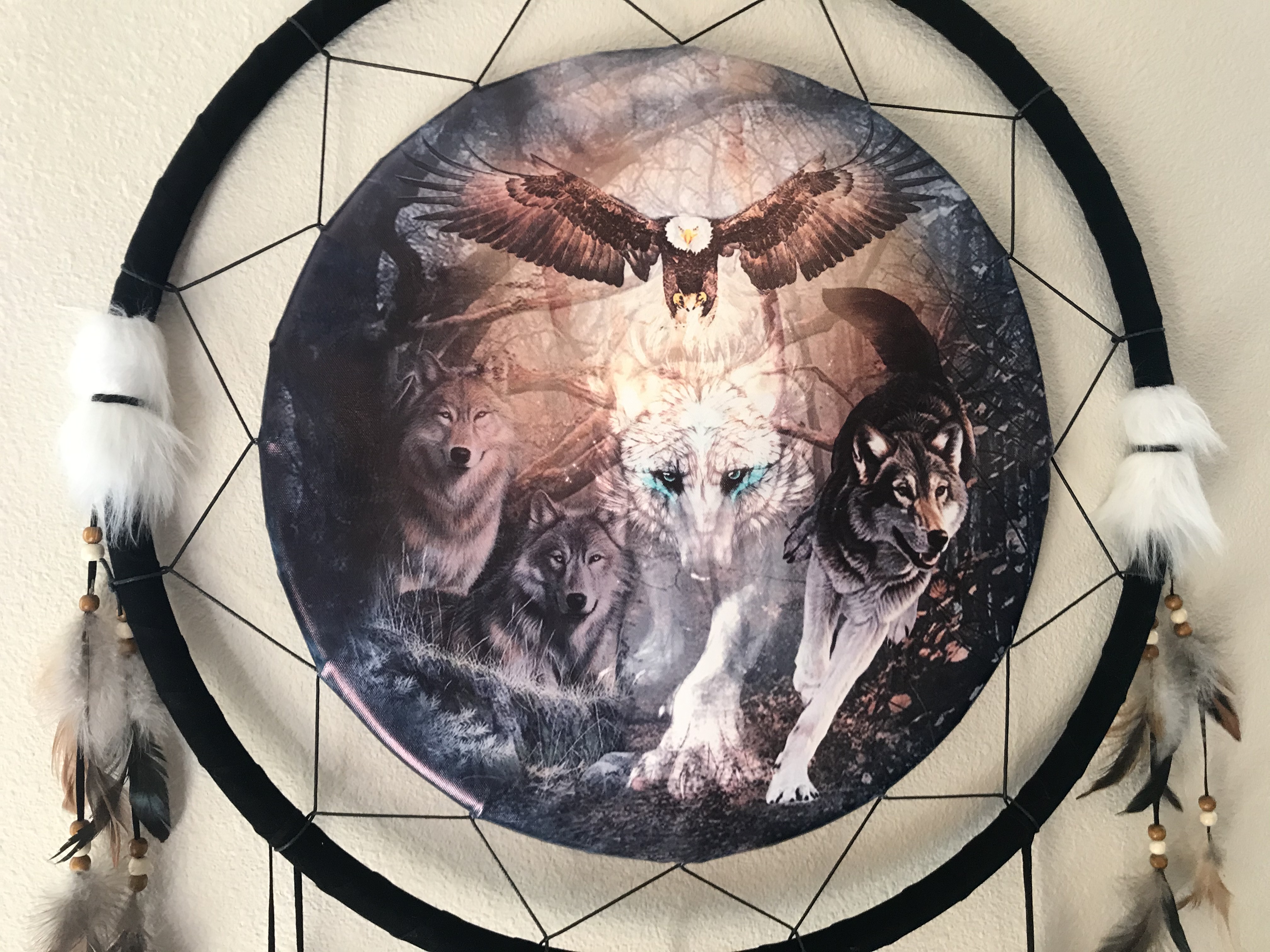 As you can see in this dream catcher, there are four wolves:  Katy, Magnum, Tootsie, and Chunk.  This confirmed my sense that my Chunk was reaching out to tell me that he loves me and he’s not mad at me.

But it’s even more magical than that.  I didn’t realize it until I was speaking with my counselor, recently, and telling her about my vision and the dream catcher, but that eagle that you see, there?  That’s Papa.

When Papa passed, his wife asked me to create a graphic for his memorial brochure. 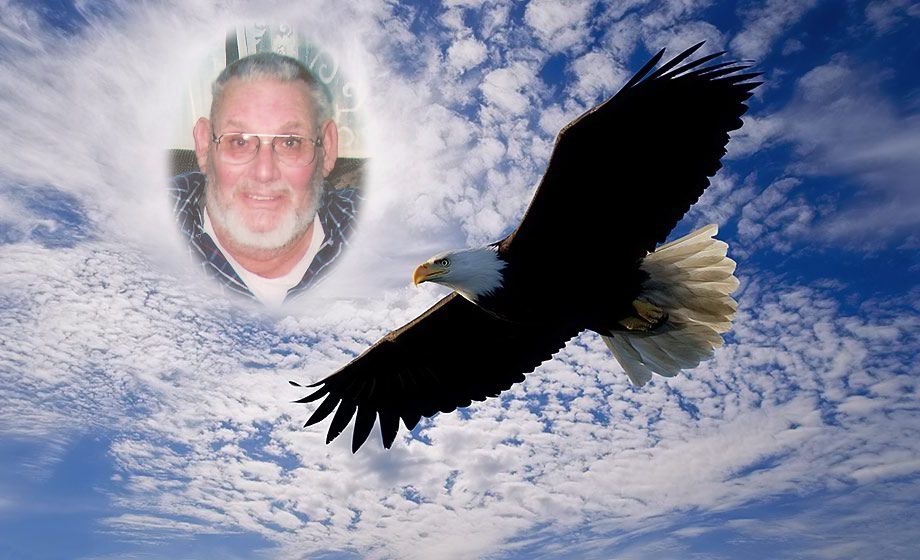 She told me he had a real passion for eagles, so this image to the right is the image she asked me to create.  Now look at that dreamcatcher I just had to have.  There’s my Papa watching over my loves, and all of them watching over me.

wonderful! I love this!! HUGS

You are so talented…..Thank-you for sharing….

By the way how are you and Drew doing?

@oniongirl You know that Katy and the others never really leave you? Maybe in body but not spirit!

For some reason, I love stories about the evolution of names. So I loved hearing how you came up with the names for them.

Real magic, indeed! Thank you for sharing this with us.

Awww… I loved reading this. All the animals who you loved and lost and your Papa were there for you through your loss.