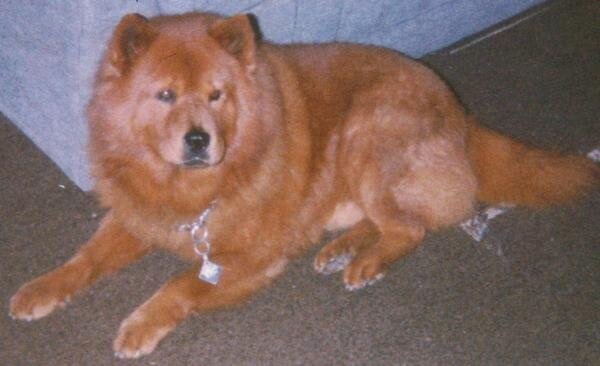 This beautiful boy was named Magnum.  He was approximately six years old when I came into possession of him.

I’d never had a dog, before, and wasn’t crazy about the idea of having one.  But my little sister was 17, and working at the McDonalds drive-thru when his owners came to her window.  She raved about his beauty, and the owners asked if she wanted him.

Of course, she had no business taking a 50 lb dog in without okaying it with her boyfriend’s mother, where she lived at the time.

It was only a couple of days before she came to me full of promises about food and vet bills and grooming and picking up dog poo.  He was very sweet.  I told her I’d talk to Dave, and, shockingly, he said ok.

I’m sure you can imagine that the first time he needed food, he was all mine.  I was madly in love with him, so I was completely ok with it.

Among the things I resented my husband for was that he expected Magnum to stay outside at all times.  I couldn’t even let him into the garage when it was pouring rain.  Why?  He might pee on Dave’s tires!

I went out into the pouring rain and threw a tarp over the clothesline, so Magnum would have shelter.

When our marriage finally crumbled, Dave shouted at me, “you treat the damn dog better than you treat me.”

Dave treated his possessions better than he treated me.  Which is why we divorced.

Time passed, and I was at a local park with a gathering of friends.  My sister and I were sitting on the tailgate of a truck.  Magnum sat quietly on the ground between us.  I held his leash.

Magnum was an angel.  If I took him to family BBQ’s, he’d lay under the table so all the kids could rub their feet all over him.  He never begged or jumped up without permission.  He was never aggressive.  Everyone loved him.

One of the guys at the gathering was flirting with me.  I was flattered, but not really interested.  Then he said something about tickling me.

I said, “I’m not really ticklish unless I want to be.”

My friend said, “is that a challenge?”  Then he lunged for me.

And that’s when Magnum roared out this no-bullshit bark that sounded like hell had cracked open.  He lunged at my friend, nearly yanking my arm out of socket as I clung to the leash.

My sister took him by the collar and said in a soothing voice, “Good boy, Magnum.”

I could not praise him enough.  My friend was shaken, but he deserved it, so I had no sympathy.  Magnum buried his face in my lap and wagged his tail.  And I was overcome with the previously unknown feeling that someone found me worthy of defending.

I had my boy for a total of seven years.  He’d been with me through the end of my marriage, through my relationship with Jackson, and most of the way through Ben.

As a matter of fact, the last straw for me with Ben was when my Magnum was diagnosed with aggressive melanoma.  He never recovered from the biopsy of his jaw.  He wandered aimlessly, whining as blood and pus seeped from the wound.  I suspected that he was near the end, and I agonized over making the decision for him.

Ben did make one suggestion that I will be forever grateful for.  He suggested we call a mobile vet and have him put down at home.

The last straw to which I was referring was that he’d the result of his failure to hold up his part of our financial responsibilities was that I had no money to pay to put Magnum out of his misery.

My good friend Theresa, loaned me enough  to pay the vet and also to get him cremated and his paw print preserved.

That terrible day, the vet showed up, and immediately got down on the floor with my sweet boy.  She called him Old Man, and spoke to him like the respected and beloved family member he was.  She assessed his symptoms and told me that his organs were shutting down and he was suffering.  This was his time.

I held him in my arms as his heart stopped beating, and I sobbed.

I’m not usually one to believe in ghosts and such, but one day a few years later, I was really struggling with depression.  I was on my way to a subbing job at a rough middle school, and I had terrible anxiety.  It was cold outside and I couldn’t get my heater to work.

I was pretty much miserable, and then I saw a dog that looked exactly like my boy, run across the street.  He looked at me and shook.  The heater instantly kicked on in my car and I was surrounded with warmth.  Then “Love Song,” by Tesla came on the radio and I wept like a crazy woman in my car.

<3 he had a nice ending and that’s a blessing. Love Tesla, and that song carries weight in my life. Weird cross section here. The guitarist carries around as his good luck charm dog tags I made for a friend who passed them on to him. They read “Tesla’s Lovedogs”

@e3 I’m from Sacramento, which is where they’re from.  That song moves me every time I hear it.

I think your dog had a great life and an awsome owner…..

@jaythesmartone, Thanks.  He actually got to take a road trip around the country the summer before he died.
Back then, there was a condom brand called Magnum.  I repeatedly had to tell people that he was not named after a condom!

that is one of my favorite songs by tesla. I do believe ur beloved showed up as ur guardian angel n just like u showed ur undying love n devotion n held him in ur warm arms…he just returned the love n favor to u. Loved this entry! Melancholy sweet!

Awww…. I’m so sorry about everything that you went through with Magnum. He sounds like he was a wonderful, once in a lifetime dog ❤.