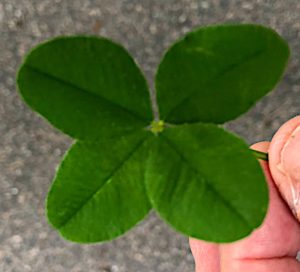 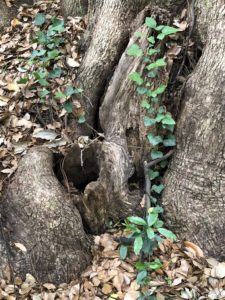 I’m one of those people who, when they see a patch of clover, more often than not will head over to it and begin looking for that rarest little emerald of a plant jewel, the four-leaf clover. I wade in and after a few minutes invariably come away empty, the rare clover again eluding my briefly focused efforts to find one. Futile, futile! But I keep trying. And the funny things is, I never see anyone else poking around in clover. Is it just me? Am I getting more and more childlike and/or eccentric as I get older? Maybe, but I don’t care. No one seems to notice me. Old folks are invisible anyway.

It’s been decades since I last found a four-leaf clover. In fact, I can only recall ever finding but one, and I have that pressed in a book somewhere.

I had a friend and co-worker back in the late 90’s who seemed to have some magical abilty to find them. One day we were taking a walk on our break, and I spotted some clover and bemoaned the fact that I never found a four-leaf one. “They couldn’t be that rare,” I mumbled. He immediately said, “You want a four-leaf clover?” He reached down and within seconds had found one which he gave to me. Astounded, I asked him how he did it. What he said didn’t help any: “You just have to know where to look.” Apparently I just never realized that, or something. Lately, I’ve even toyed with the idea of Googling this simple search: “How to quickly find a four-leaf clover every time.”

Well, yesterday on my usual walk at the state park, where there’s a lot of clover, I spotted a promising looking batch on the bank of the main tidal creek, right where the first English settlers landed in their trading ketches in 1670. We’ve had very little rain so much of the clover in the park has been short and dessicated looking. But this clover growing in a shady spot was very healthy.

With sudden anticipation and hope, I found myself repeating twice these words, ”I’m going to find one today!” half serious and half thinking I’m deluded. Apparently the serious side won out, for as soon as I had said those words, I bent down and peered right at a beautiful, large four-leaf clover. I stared at this unbelievable sight, thinking it must just a couple of three-leaf clovers stuck together, but no, it actually had four leaves, as confirmed when I plucked it from the patch and held it in my hand, wonderingly and with much gratitude and delight.

Excitedly, I got in a hurry to finish my walk and head home to put it in a book. I spotted a young park employee, probably a college student, and called out, “It’s my lucky day. I found a four-leaf clover.”

“You did,” he exclaimed. “I’ve never seen one before. Can I take a picture of it?”

I had to laugh, and obliged his request.

“Where did you find it?”

I told him, and he had no more time to chat. I think he was going to head off to try to find one himself.

His parting words, “You mean they really do exist, after all?”

“They sure do I replied.”

After this interesting encounter, I had only one more stop. I had to check the base of the trunk of an enormous old Camphor tree with several unusual openings to see if there were any signs of recent fairy or gnome activity. A week
ago I noticed a bunch of camellia petals strewn about near one of the entrances. Nothing there, but that was okay. I had my most amazing find already.

Well done!  You’re not alone.  I always look for them too, but I’m rarely able to find one.

@wren I went to the same spot yesterday hoping to repeat my good luck, but nothing.   However, I’m very happy with that one discovery.

We used to dig through the clover on our lawn liiking for them as kids and press them in books. It was fun to come across them while reading, but most of my books are gone now.  Yours is amazing! I’ve never seen one that big!!

@startingover_1   It was in the only nice-sized patch in the park from what I could tell.  I have that clover pressed in one of my favorite books with a little note on the cover saying, “Four-leaf clover within.”  I should probably put the page number, too.