A tropical storm off the coast of Florida has moved out of sea.  It was the  first named storm of the dreaded approaching hurricane season.    Those of you who don’t live along the coast, count your blessings..  Once again we’re faced with an early start to hurricane season.  I dread it.  It’s the main reason I want to move from here.  Three years in a row we here in Charleston have been given mandatory evacuation orders to leave.  Each year it got more and more stressful, and I couldn’t leave because of Mom.   This year I won’t have that stress, just the stress of knowing everything could be blown away in a day.

This latest named storm has jumpstarted  a project I’ve been sitting on for months since Mom passed, and which I’ve had more time to attend to, namely going through dozens of file folders crammed with more than  50 years of documents, letters, photos and many other kinds  of priceless memorabilia from the past.  I’m absolutely a packrat with borderline hoarder tendencies!!

As a result, I have begun the process of scaling this mountain of memories.  From time to time, as I’m doing tonight, I will share a few things with you and continue to do so on occasion..

The first folder I dug into had some photo copies of me in 1991 at the small weekly newspaper where I worked at the time.  Those faded old photos yielded this account of my rather eventful tenure at that newspaper.  I haven’t written much of anything about it in my journal for reasons that will become more clear.  But 30 years is a long time, and now I can focus on the good things I accomplished there and on memories of the many nice people I worked with and encountered in the course of my time there.

Journalism was my chosen career for years until my life circumstances changed rather dramatically.  The paper was owned by a chain which produced 14 other small papers.  I have many, many stories from my brief time there.  In short, I needed a job badly.  My aunt  saw an ad in a  newspaper for editor of this weekly and called me in New Orleans as soon as she saw it.  I called the publisher and within two weeks or less, I was thrown into the pit and found myself up until 4 am producing my inaugural issue.

Those  people REALLY needed an editor (long story) and were delighted to find out what a workaholic I could be.  I hadn’t worked on a newspaper in 12 years, spending the time in between teaching,  going to graduate school and traveling.  I got a masters in journalism degree and planned to teach at the community college level, or so I hoped, but that turned out to be a lot harder than I thought.  My second college teaching job went badly awry.

I tackled that first issue of the newspaper like I’d never been away from newspapering for even a day.  It all came back to me in amazing detail and with an ease and naturalness I found extraordinary.  I didn’t have to worry about limping back into the profession.  I hadn’t forgotten anything.  And the location of the newspaper was perfect, right there on Main Street about a hundred feet from the range lead tracks that cut through downtown.  Every Tuesday night I worked late, and at 11  an AMTRAK train roared through town at  high speed shaking the walls of the building I was in.

During the first few weeks I had a reporter to help me, but the head honcho owners quickly realized they could cut corners by sending this reporter off to another town and letting me do everything with one production assistant (who was amazing and I could not have done it without her) and a couple of stringers (for sports and city council, thank God).  Needless to say I very upset by this, but had no choice but to soldier on and put out the 24-page weekly by myself with this one assistant who also laid out all the ads.  She commuted about an hour’s drive each way, and on production nights every Tuesday she often stayed until midnight or later helping me, with no overtime pay for either  of us, of course.  I did come into the office an hour or so later after treating myself to a ham and cheese omelet at my helical Huddle House.

At 8 each production night Linda would go to the Sonic Drive-in and bring back something for herself,  and for me a chili-cheese dog, tater tots and a milkshake.  Never before or since has junk food tasted so good.

Linda and I got so adept at production over time that I would go through each dummy page with copy pasted in, look at the first graph of each story, and call out a headline — Bodoni and size of the font — and she’d type it in the Mac computer.  Every headline fit perfectly.

This was quite an adventure for me.  However, it started off rather badly when two local potentates indirectly, but not so subtly, threatened me during a meeting in a restaurant after I had just started.  They said things that made the hair on the back of my neck stand up.  The area where this town was located was home to a notorious imprisoned criminal and I discovered fairly soon that there were some very unsavory people in that town, but also some  extraordinary and very decent people.  I never planned to be there long —  just long enough to get myself established again after being unemployed for months — so I had lots of justifications for staying in this political cesspool of a town. Politics often ruin everything.  My predictions of a short tenure were entirely born out.

Anyway, I won’t go into that now because it’s quite unpleasant.  Again, I very badly needed a job.   As I mentioned earlier, thirty years later I now want to remember with great fondness the people I worked with, warts and all.

I was a workaholic there.   When the two head publishers/owners/honchos came for a visit about six weeks after I had started, and just a week or so after they had pulled my reporter, I told one of them these exact words,  “You pulled the rug from under me.”  Needless  to stay, I didn’t endear myself to them.  How I lasted another year I’ll never know.  I left in the Fall of 1991 because the regional publisher with the chain, a smarmy, faux-cheery idiot, sat me down one day and said I didn’t have enough crime and wrecked cars on the front page.  That is exactly what he said.  There was some validity to his criticism, but I had my own very clear ideas about what a community newspaper should be like.  Nevertheless, I was stunned.  I had been putting out a pretty decent paper given the lack of staff and help and the strange circumstances   in that town.  I basically quit then after he had all but fired me, but I agreed to stay on until they found a replacement.  That took four months.  My eventual replacement was a nice guy, kinda salty and rough around the edges.  He kept a gun in his file cabinet, I later found out.  He  lasted less than a year.

So, given all this, I still saved articles, columns and some photos from that hat time, including these..   Too bad I couldn’t stay in journalism.  I liked so much about it. 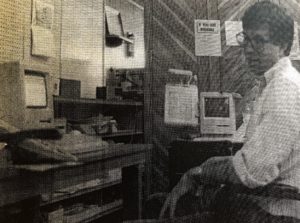 (Me in my newspaper office, 1991.  Notice the ancient Mac computers.  (This is a photo of a photo copy)

I worked for Augusta [GA] Chronicle, owned then by the Morris family. I learned a hell of a lot as a reporter and doing a little editing. I was 17 when I started as a copy clerk and moved up to reporter the following year. Some great times and would have been better if I had known then what I know now….😏 I, initially, typed my stories on an Olympia typewriter, then we got terminals. The mainframe crashed regularly.

@solovoice    I started my career as a rookie reporter at a twice-weekly paper in SC.  That was heady stuff.  I loved feature writing and totally felt I was in my natural element in that job.  I did all my own photography. We used Royal manual typewriters, the same kind I used in my high school typing class, by far the most useful class I’ve ever taken, high school or college.  Lol

@oswego I learned to type from what I call the Bill Baab School of Typing. He was a sportswriter and typed mainly with the right hand and a finger from the left which was also holding a pencil for making corrections on the fly!

@solovoice lol.  That’s a new one.  I remember all the old timers furiously typing with their two forefingers.  They were pretty fast, too.  I was just lucky.  I taught myself to touch type at 12 because I was fast becoming a journalism nerd and wannabe writer, even that far back.  I remember at one small paper typing a sports stories over the phone from my stringer and not having to copy edit it much at all.  And I didn’t have to write any sports stories.  They would have been above and beyond the call of duty.  Lol

Oh, man, those old Macs were high-tech back in the day! Of course, our phones now have more power than those things did.

I loved reading this!  I can relate to it. My friend started a community newspaper and asked me to help her. Those were the days of cut and paste, up all night, take it to the printers and then distribute it around town.  The two of us, along with a copy editor, handled everything for many years.  My friend dealt with sales and the commercial side of the paper including designing all of the ads.  I did the reporting. Eventually we added someone to cover school news and another lady wrote a column for each issue.  Long, long hours… but some of my favorite memories.  Because we were an independent publication, we decided the direction of our paper.  I covered local and county news events, but we also made sure we spotlighted the uplifting and positive aspects of our community. Great memories. 😊

Praying for you, my friend, as hurricane season starts.  My brother and his wife live in Florida, so I know the stress that comes during this time of year. Take care and stay well.