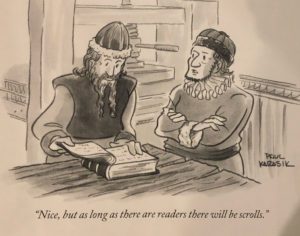 Not long ago I was asked a curious question by two very intelligent and keenly perceptive recent college graduates. It was this: “What was life like before the Internet?”

Well, of course I could answer that question, but it’s complicated and requires a lot of thought. The Internet has changed almost everything about life and work as we of a certain age knew it. The young have grown up with the Internet and computers in all their various manifestations. I didn’t even get my first computer until I was in my mid-forties. But when I did, and when I was first exposed to the Internet at work, I knew things would never be the same. From the first moments when my painfully slow modem and ISP connected me to the Web, I was hooked, overwhelmed, astonished beyond belief. It’s all I could think about. My many books began to gather dust and all my thoughts were directed at the Internet. It was everything an inveterate seeker of new knowledge and “cyber” experiences could ever want. I pinched myself, wondering it it was real.

Over time the Internet became my main source of news, commentary, feature stories and good, in-depth writing of every kind. Not to mention every kind of information available through innumerable Web sites and now a virtual galaxy of apps. Mind blowing and light years away from the days of my early youth when I had only a 20-volume set of The World Book Encyclopedia, every page of which I must have perused because I was an inquisitive kid who loved learning. By the time I was in middle school I was reading two daily newspapers, plus magazines such as Newsweek, Look and Life. All print media, of course.

My questioners are possibly as much as, or even more, enthralled and amazed by what is available on YouTube than I am. Never could I have imagined when I was their age that something called the World Wide Web and the Internet, and hence YouTube, would evolve into the technological miracles of communication they have become over the past 25 years. Reaching out to others via email, text, chat and instant messaging, and now exponentially for content creators of every imaginable financial means, such video services as YouTube have meant that the communication media of the past, whether from one to one or one to a few people, has now become one to a potentially unlimited number of people. This is very exciting and intoxicating. An individual can become a cyber network or channel and reach potentially millions. Thinkers, sages, academics, have seized the opportunities. Millions of others around the world share their insights, lives, hopes and dreams. Since 1999, I for example have written essays continuously for two online journal sites before blogs and Facebook even existed. I have been my own editor and publisher, and my writing has received many comments from others who, with their wise and perceptive feedback, encouraged me to keep on writing week after week. These writing communities and the countless essays I’ve contributed have resulted in the work I am most proud of in this lifetime. It was only because of the Internet that I was able to reach this audience. All my writing for years at newspapers in the pre-Internet print days reached only a fraction of the readers that were drawn to my writing through the Internet. Again, 25 or 30 years ago this would have seemed like the stuff of sheer fantasy.

In pre-Internet times there was mass media controlled by three large broadcasting networks which decided what news and entertainment we could see or hear, and newspapers in every city and many towns which determined what news we’d read in newspapers, which in addition to TV and radio were the only games in town.

Now within a generation everything has been turned upside down. The Internet has created a “brave new world” come to life. The technology which enables us to access this worldwide nervous system — the computers, smart phones, tablets, and the entire infrastructure of the Web and Internet — would have seemed totally incomprehensible to me when I was young, more akin to science fiction than anything.

So, to continue my response to the question, “What was life like before the Internet?” I’ve been pondering that question a lot since then, and part of my answer has already been given in what I’ve written thus far. However my initial, and quick reply, was perhaps the most accurate analogy. It also took the form of a question: “What was life like before Gutenburg invented the printing press in the mid-15th century?” Prior to the printing press, books were hand-copied, so a very small elite of the educated had access to them, namely, scholars, philosophers and clergy. After the printing press was invented such holy texts as the Christian Bible, for example, could be printed in large numbers and made available to the masses for the first time. This greatly expanded literacy from being virtually nonexistent to a force that in time would threaten the power of authority and institutions and pave the way to the end of feudal society. The impact was that profound.

So it is with the Internet, with consequences for society and the entire world, both good and terribly bad, as with the vast juggernaut’s called Facebook, now “Meta” to connect billions globally with friends and family and benign interactions, but also with unimaginably toxic videos, narcissistic bloggers and power and ideology obsessed individuals and organizations. Then there was Twitter, Instagram and the smaller social networks. Pandora had been let out of the box.

So life in pre-Internet days, as I remember it, was almost quaintly simple compared to now. We can find and know almost anything we want through a singular device, a small computer in a “smart phone” that opens up veritable universes. One really can’t even begin to describe how limited and slow access to information once was, even with the innovations of live TV news broadcasts and the spread of these broadcasts via satellite. However, the number of organizations and media companies that communicated to large numbers of viewers and receivers of information and entertainment was quite small by comparison with the Internet which reaches every corner of the globe instantaneously.

In my final career, my job depended gradually and then overwhelmingly on the Internet, via Web sites or electronic databases. I evaluated and recommended Web resources and databases, and this work was integral to my ability to do my job well, and it was deeply satisfying as I loved the exploration angle and the satisfaction of discovering one fascinating gold mine of information after another. In short, the Internet and I became inseparable. But that continuing evolution and its real world consequences is a whole other story.

To further put things in perspective, everything I used to do with paper and in person such as errands to the bank and post office, can be done online. No more waits in lines at banks to deposit a check. Emails have replaced letters, and I used to love to write long, handwritten letters. Texts have replaced phone cals in many if not most instances. The young today think nothing of this. It’s as ordinary and natural as brushing your teeth. I never really enjoyed long phone conversations, even though in my newspaper days I used the phone constantly. Now it’s so much easier, and in many ways less stressful, to text. We can text photos and documents and much else as well.

Being someone who has loved photography all his life, I can aver that digital photography is infinity easier and more satisfying than processing film and printing out photos. The Internet and photo sharing sites have enabled me to share thousands of my pictures. All so immensely satisfying.

Finally, and for me this is probably one of the most overlooked and taken for granted aspects of life before the Internet. With the endless wonders of the Internet it is, or should be, impossible to be bored. If anything the Internet has ratcheted up our input of stimuli of every kind to warp speed, and researchers are discovering what seems like common sense to me: all this stimulation and processing of extra information by the brain, is in fact altering our neuronal brain circuitry. This has enormous potential for mind expansion and learning, but used in frivolous, addictive or dangerous ways, this overload of excessive screen time can cut is off from quiet reflection, time spent with others, and the invaluable experience of reading a good book.

With the Internet there’s never a dull or empty minute or hour when you are online. No flipping idly through magazines wait at the dentist or doctor’s office. At restaurants people state at menus on their phone screens. Waiting at airports is less monotonous. I used to lug books around with me on public transportation or sitting at the park on a pretty spring day. Now everyone is staring at their screens even as they walk down sidewalks to their destination. People rudely text at gatherings or meetings to avoid talking to others. Who even knows what students in college lecture halls or classrooms are looking at on their screens while the professor is droning on in front of the class.

When I was growing up in the 1960s and 70s we had to go downtown to big theaters to watch our favorite movies. Now we csn view them at home on any size screen.

The implications of this absorption into the vast ether of the Internet both frighten and exhilarate me. With my phone in hand I am never really alone. There is always someone I can text or email, some saved article to be read later, some YouTube video or instant star to be amused by, some video on how to do something. A mediator talking directly to us about the esoteric wisdom and teachings of all ages and traditions.

Mind blowing and mind expanding. But how much is too much? The answer is that there are no limits to what we can do, or become, or be influenced or repelled by from now until the end when the curtain falls at last on only this one particular but grand act in the cosmic drama of life in the universe(s).

Beautiful. I love your positive description of life with internet, while acknowledging the challenges.

All so very true!  The World Wide Web is one of the most important inventions in the whole history of mankind — it’s been a quantum leap in so many areas!  I also can’t imagine life without it, even though I was in my 50s before I got my own computer.  It didn’t take long to become addicted!