August has been an up and down month, like a bit of a roller-coaster as I went from a high to a dark low in a matter of days. So I’ll start of with the good news, and you’ll get where this is going.

In the early part of last week, Kaylee (Kat’s mom) had some news for me: she’s pregnant. To say that we have been getting along lately was a profound understatement. If wasn’t done on purpose, but given how awesome it is to have Kat in our lives… we were excited about the possibility of a sequel.

Our families were more annoyed than happy for us, but we didn’t give a fuck and couldn’t be knocked off our highs.

Now for the bad news: last weekend she had a miscarriage.

We were brokenhearted over it, but we understood that things like this could happen.

While doing dome reading, Kaylee told me that she wanted to name the child as something she was reading said it helped the heeling. While that might sound strange to some, I didn’t have any opposition to it as I thought it would be helpful for both of us.

The name picked for the child we lost last weekend, Kaylee picked the name Wren.

To mourn the loss myself, I did what a writer would do during times like this: I wrote something.

I wrote this sonnet for Kaylee, to support her in her grief: 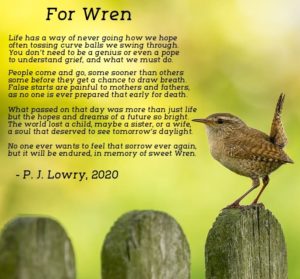 This my way of being as supportive as I could. She really liked the poem, and I’m glad she did.

I’ve been pretty quiet most of the week, and might be for the rest of the month.

I hope that wasn’t too depressing, but I’ll try to do better next time.

Until then, take care!

Wren is a beautiful name. I’m sorry for your loss.

I am sorry for your loss…..

so sorry  for  your  loss