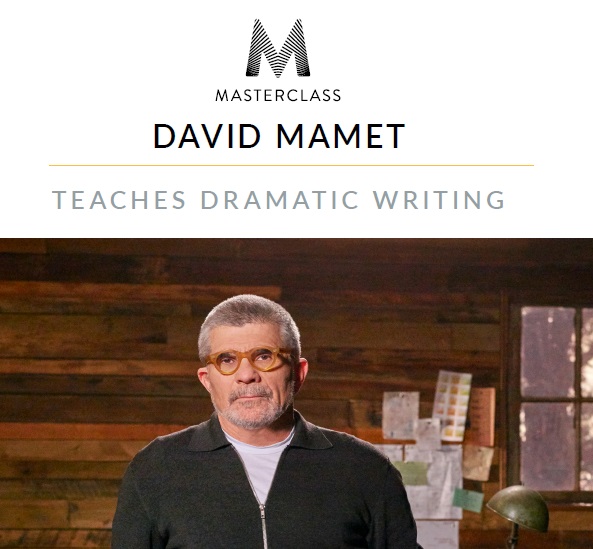 I couldn’t help it, I started to take another MasterClass while still doing the other one I’m more than halfway through. When I was in university, I used to take as many as 4 or 5 courses per semester, so taking two online courses just for kicks by comparison doesn’t seem that tough. I can totally handle it.

I am a big fan of Mamet’s work, especially films like Glengary Glen Ross, American Buffalo, and even Hannibal. So with that in mind I also wanted to learn more about writing drama so this seemed like the right choice for my second writing course.

I’m going to be finished the Gaiman course in a few weeks anyway, so I will start another writing course after that too. Maybe Dan Brown or even Margaret Atwood… maybe even a cooking course.

In the meantime, I’m going to keep posting my homework, cause these classes are inspiring some great work.

Share a myth with your classmates in The Hub. It can be an epic account of an infamous night out with friends that has been solidified in the history of your camaraderie, or a tale about a family member that has been passed down through generations — anything that tells a story.

The ultimate goal is to entertain your audience (i.e., your classmates). Write the myth as compellingly as you can, working to engage your readers as if you were all gathered around the camp fire.

My father met his best friend Joseph (Joe) through the army cadets, as they were both spending a summer on what was nothing short of a boot camp and treated like soldiers for the better part of two months. These two became as thick as thieves, as they would often pull pranks and get into trouble for it. At the end of their summer, they wanted to pull of the mother of all pranks. Something that would have everyone talking about it when they returned to school. They put their heads together and came up with something ambitious, cocky, and even a little brave. Unlike my father who was a big man, Joe was small and thin which made it easy for him to climb. When everyone was asleep, Joe shimmied up the flag pole and stole one of the flags that was on top of the pole.

There were three flags on that pole. The first was the flag representing the nation, the second being one that represented the base, and the last representing the superior officer in charge of the base. Joe took the bottom flag and left the other two where they were so it would take a while to notice the one he took was missing. After the theft was successfully complete, everyone went back to their barracks to wait and see when someone would notice. It didn’t take long.

The entire based was woken up at 5am, which was earlier than usual. Not only did the entire base have to wake up, they were instructed to meet in the square and stand at attention until further notice. The cadets all stood at attention in shorts and shirt as they weren’t allowed to change before coming out to be disciplined by the commander. They stood out there like statues for what seemed like an hour while the lower ranked officers yelled at them, telling them all that they were in huge trouble. The commander came out to the square and took over for his officers and ranted at the cadets as if he had just tagged into a wrestling match. It was then when the cadets learned what was going on.

The small flag that had suddenly disappeared that night not only belonged to the commander, but the flag that represented him also has a high personal value. That particular flag was a gift that was given to him by a member of the royal family. For this reason, all the cadets would be standing in the square while all the barracks were being torn down by the other officers as they searched for the flag. Once that flag was found, the person responsible would be severely punished in front of everyone else.

Joe and my father stood there in the square with the rest of the cadets for hours, not moving a muscle and just listening to the commander freak out and order the guilty party to step forward and return his property. What was supposed to be a day of celebration, closing ceremonies, and fond farewells, as forever ruined by this prank as the cadets spend the majority of their day standing at attention. When the time came for the kids to return home, the flag was still missing. The commander had no choice but to dismiss everyone and send them home. Parents were waiting for their kids to come home, and they would start complaining if they were late or didn’t come back at all.

After taking the bus that returned them to their city, Joe and my father were approached by one of the officers who had followed their bus home. The officer stepped out of his car and walked up to them.

“I know it was you two,” he told them, “Pretty much everyone knew it was you, but they all kept their mouths shut and had your back. Just give me back the flag, and I promise to say I just found it and have no idea who took it. It’s a personal item so tell me where it is!”

“Where the hell is it?” the officer asked, eager to bring this matter to a close.

“Show him,” My father told Joe.

Joe walked over to the officer’s car, and removed the hub cap off of one of the front wheels. Inside the hub cap was a small bag, and Joe put the hub cap back onto the wheel before walking over and giving the small bag to the Officer. The officer looked inside and there was the missing flag.

“Jesus,” the officer said, “Do you have any idea what would have happened to me if they found that as I was leaving?”

Joe and my father responded by laughing quite loudly. The officer couldn’t help but chuckle himself as they had pulled a fast one on everyone, especially him.

“Thank you for giving it back,” the officer said, “I don’t ever want to see either of you on our base again, is that understood?”

“Yes, sir.” they both said, giving their final salute.

They never went back to cadets, but Joe and my father remained best friend for the rest of their lives, causing more trouble wherever they would find themselves and even all over the world. They never lost touch with one another, raised families together and always made the best out whatever life tossed their way. I was proud to know them both and often enjoyed listening to the story about their time with the cadets, and especially the one about the missing flag that I just shared with you today.

This story is dedicated to my Dad’s best friend, who I always referred to as Uncle Joe.

Joe passed away last week, and will be dearly missed.