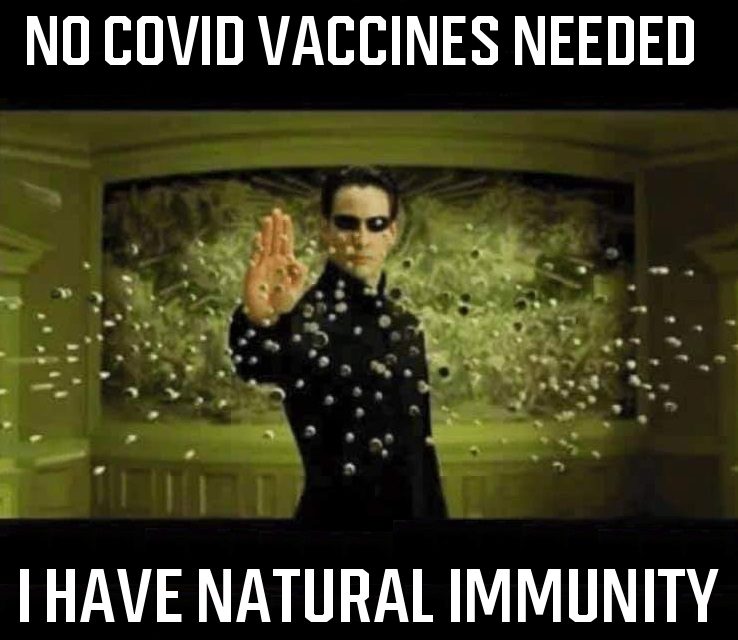 After my decent clash with covid, I can now breathe a little easier, both literally and metaphorically, because according to recent studies natural immunity from previous infection is thirteen times stronger than any vaccine out there. It also protects better against current and future variants which is something none of the vaccines can do. So right now, there is no logical reason for me to want to take the jabs and plenty of reasons not to take them. Now I’m not telling people not to take it, or to get covid to get their own natural immunity. I spent 16 months being careful and trying not to get covid because it sucks and is not fun at all. I never wanted it, and it was as shitty as advertised. The only thing I will tell you is to speak to your doctor and make a decision that is best for your situation.

What pisses me off about covid was that I drank a lot of hot tea, ate a lot of chicken soup, took a ton of meds, vitamins and puffers to fight this thing to help my body get over it. I also took two scalding showers a day to keep my lungs clear too. I worked my ass off to fight this thing, and what am I told when I inform people that I managed to beat it without having to go to the hospital: you got lucky.

I got lucky? That’s what you think happened? Oh, fuck you to the god damn moon! I took what my doctors gave me, drank a lot of water and root beer, and busted my ass to save it because I didn’t want to go to a hospital or anywhere near the fucking ICU. I had a friend who did the opposite of what I did. Didn’t listen to her doctor, didn’t take her meds, and refused to eat. She had to be taken the hospital by ambulance and was on a ventilator in ICU for ten days. I think it could have been avoided, but the person chose not to do what I did. Thankfully my friend survived, but there were moments when we were genuinely scared and thought the worst.

This is no different from any other medical ailment. If you do not take it seriously, it will fuck you up. I’ve been treated for Mono, pneumonia, and other nasty shit in my time… and I took everyone of them seriously and never slacked off on any treatments or remedies. I almost lost my leg to a staph infection, and not all I have is a ugly looking mark on my leg that looks like a massive bruise. I’d rather have a big bruise than no leg at all, and the only reason I got to keep it is because I fought hard for it.

Covid is no different; the harder you fight it, the easier it is to kick to the fucking curb. Joe Rogan and his doctor literally tossed everything but the kitchen sink at his covid, and he got better in half the time I did. To be fair, if I had a hundred million dollar contract with Spotify, I’d spare no expense and fork over top dollar for anything I could get my hands on too.

The best part is I’m finally getting back to work, and getting my mojo back. I did some edits and am almost finished writing a new comic script. I’m still slacking with the novels, but I’ve been constant with new poetry. Nanowrio (National Novel Writing Month) is just around the corner, so I’m looking forward to doing that marathon again. I’m not sure what kind of novel I’ll try to write in November, but I hope to pick one that will flow so I don’t get stuck halfway through the month. I’ve got some projects that I am seriously consider, but have decided yet. Maybe when I do, I’ll write an entry about it to preview what kind of story I plan to do for Nano.

What’s even better than that is I have a date on Monday evening with a pretty amazing young lady. We met by chance when I went to vote a the early polling station, and we talked politics for a while. After that little powwow, I took a chance and asked if she wanted to go out and have another great talk, maybe over coffee. She gladly accepted and gave me her card, with her phone number. I really like her, and am hoping that our first date goes relatively well.

Maybe I’ll post something later in the week and tell you how it went, if I remember to. I’ll try, but no promises!

Until then, take care!

Totally agree. We have a lot of power over our own immune health and defence against covid.

I also agree, I’m pretty sure I had it, and 13x better is significant.