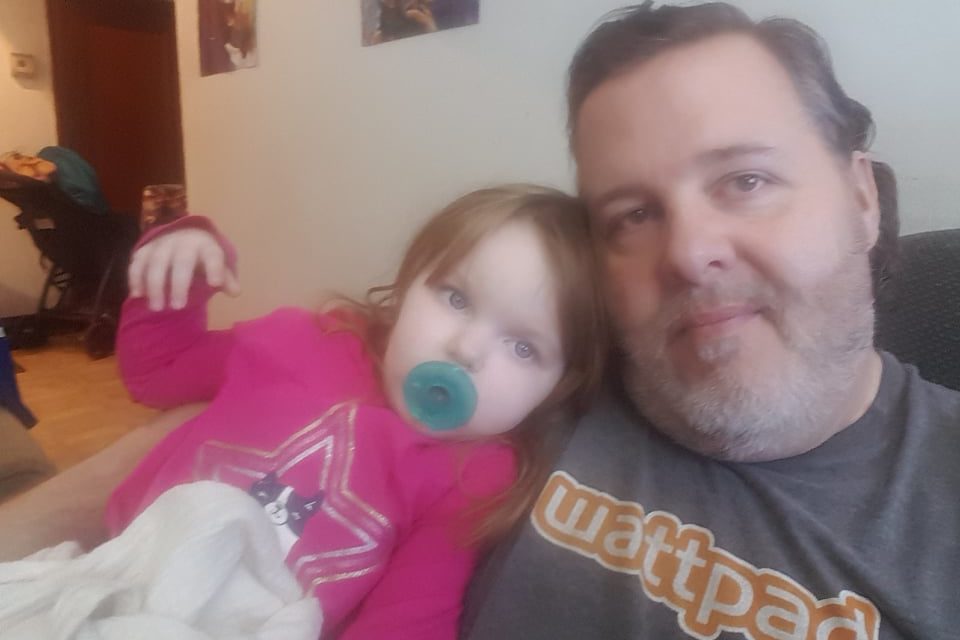 I am back with another update, and while things are alright on this front not all news has been good. But before I get all depressing and moody, I’ll start with the good stuff and work my way down. Yeah, that’s how I’ll do it today.

The kids are doing well, all three of them. The boys are happy to be back at school, and Katherine has been doing soooo well at daycare. Being around kids her own age and socializing has done wonders for her development, and that’s a great thing. And the best part is that I’ve been keeping Kat overnight at my place, sometimes for whole weekends and more. I’ve also enjoyed every minute of it, watching movies, playing games, and encouraging things like arts and crafts. I recently got Kat a drawing table, and she loves sitting at it and drawing things with markers, and then herself with the same markers. Thankfully Dad bought washable markers…

I wrote another Nano in November, and this year’s National Novel Writing Month (NaNoWriMo) was a success. I crossed the 50k finish line on the last day this year, despite having a good start but I had to take care of some kids with a flu so I lost a bit of time that way. Still, a win is a win, and I’m proud of the work I got done in November again. That’s 15 wins in 16 years, so that’s nothing to laugh at as well. The one time I never made it was a struggle, as that was the year I had the stroke, and I writing was a struggle that whole year. But I’ve done two successful Nanos since then, and I’m happy to be back on track again. Felt good to finish another 50k this year.

Another thing happened in the middle of the month that distracted me from my Nano, and that was the death of someone that was close to me, or at least someone that used to be very close to me. An old childhood friend that I actually had a relationship with several years ago recently passed away after her second battle with brain cancer. We dated after her first successful battle with it, and at the time I was seeing her she was cancer free, but it came back a few years ago and passed away last month. I was sad to hear the news, as I hadn’t seen her in years. The last time I saw her we had bumped into one another at the mall, and she was doing fine. She was healthy and going to school, we had a small chat and quickly caught up and then went our own ways. I had no idea that’d be the last time I’d ever see her, but it was a good memory, and that was our goodbye. I attended the wake, and Ethan even came with me, as he remembered her and wanted to also pay his respects.

It’s days like that when you’re forced to reflect on the end that eventually comes fro us all. No one gets out of here alive, and sometimes it becomes painfully clear that I have too much work to finish and not enough time to do it. I’ve been guilty of procrastinating for far too long and I need to get my ass back to work or I will leave too much unfinished when my time is finally up. Right now I’m working on three non-fiction works that I want to finish before I pass on, important works that detail what I’ve done with my life as well as letters to say goodbye to certain people. I also have over a dozen novels that need more attention than I’ve been giving them, but I might be spreading myself too thin. I might need to pick one fiction and one non-fiction and just put all my efforts into finishing them, and then repeat. That might get better results than what I’ve been doing lately.

So that’s where my focus will be for the next few months, working on projects and trying to enjoy the kids a bit more. I’ll try to divide my time up fairly and make the best of it but make no promises. I’ve been terrible at organizing anything but feel that by at least trying, I’ll get more done that way than not trying at all. I will be back soon, maybe to post a holiday entry, as well as a best movies of 2021 entry. Despite not being in a theatre all year, I’ve still managed to watch my fair share of movies, thanks to steams and torrents. So I will be around, and I hope everyone else is doing alright too.

It’s nice to see a parent so involved in their kids lives.

Congrats on another Nano!

Sorry about your loss, facing one’s own mortality whatever the cause is never much fun, This past month had a medical scare for us, it just brings things back around into focus fast.