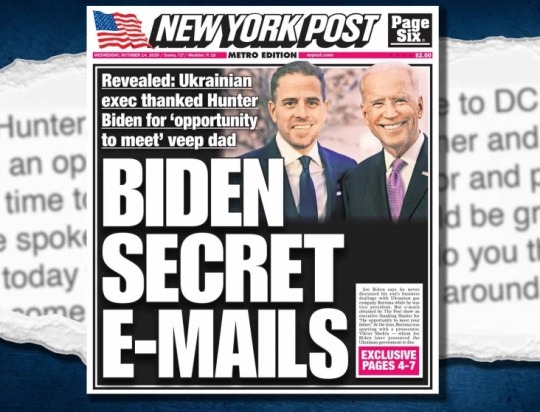 Last week the shit seriously hit the fan, and the democrats I keep in touch with are all panicking. This was the October surprise they just didn’t want to see. Yet here it is, exposed for all to see and examine for themselves. For whatever fucked up reason, Hunter Biden left a laptop at a repair shop and never came back for it. On this laptop are emails that expose both himself and his father to corruption that many on the right long suspected, but just couldn’t prove. This computer has all the evidence to prove that Joe Biden was using his position as VP to enrich himself and his kid. Disgusting.

Hunter Biden relinquished the rights to everything on his laptop after signing a 90 day repair shop agreement that if not picked up in 90 days … he no longer owned the computer or its content. You tell me how stupid this man is because I don’t have the words. That means that everything on that computer can go public. And it probably will. I’m hearing that the repairman in question made four copies of the hard drive. He gave two to friends in the event of his death. He called the FBI and handed it over to them in December 2019. The contents of the laptop could have stopped the Trump’s impeachment process dead in its tracks, but nothing came of the FBI’s handling of Hunter’s laptop.

Democrats had to know about its existence, because someone at the FBI probably told them. I’m willing to bet that last January’s Impeachment was probably a ruse designed to get them to use this evidence to defend the President. If the democrats feared the GOP had this, then they wanted Trump to fire off his rounds early so it wouldn’t be as impactful in the election. Doing that just wasn’t necessary because we all knew this debacle would be DOA in the Senate. If the impeachment never went forward, the government could have concentrated on something else that was going on around that time… like the COVID-19 outbreak! If I was a prosecutor, I would honestly consider charging the FBI with obstruction, and also with 215,000 counts of involuntary manslaughter.

But I digress, let’s get back to our little repairman in Delaware.

The repairman waited until May 2020 to contact other US gov officials and the media. From all the people he called, only Rudy Giuliani’s office replied. Giuliani and his people then vetted the contents on the laptop with lawyers and sat on it until this week. NY Post began revealing the contents of the laptop to the public earlier this week causing a major internet censorship blackout.

The censorship from Twitter and Facebook was the stupidest thing the left could have done. Had the tech giants just let this story play itself out … it probably would already ended on the scrap heap of everything else connected to it. But they didn’t, and now they’re  have to answer for it. There was an 83 page Senate report of Hunter and Joe’s business dealings abroad out a couple of weeks ago, no one even flinched. The Times said it was all nonsense and everyone went on with their daily lives. There was an impeachment hearing of a sitting US President based on a phone conversation on this very subject. Water under the bridge. No wrong doing found. There was a 2016 New York Times expose on how troubled the Obama administration was about Hunter Biden’s Ukrainian dealings. Who even references that now? So it’s not like this story fell out of the sky. It’s very much a part of who Joe Biden is. Now it’s taken on another complexion entirely. Not because anything new was revealed, but because it was censored by big tech. Like they said during Watergate, it’s not the crime but the cover up.

The Head of Twitter and Facebook have be subpoenaed by congress to answer for what happened. During that day, we’ll have public hearings on every major news channel and all they’ll be talking about is Hunter Biden, the New York Post, and corrupt leftist censors. They are going to spend the whole day bashing Joe Biden, and it will all be on the taxpayer’s dime. Fucking brilliant. Censoring the NY Post had the exact opposite effect. Now that news is everyone and everyone is reading it and talking about it less than two weeks before the election. But the fun is just starting. It’s ugly, and there will probably be some form of retaliation. Yet this is about as ugly as it gets, and from what I’m hearing, it’s gonna get uglier. The Post has a lot more where that came from…

The frustrating part is Democrats had four years to find a candidate and build a platform around him or her in order to defeat Trump. Four fucking years, and this is the best they could come up with? I am not impressed. Once again, the democrats chose to roll the dice with someone who had these kind of skeletons in their closet rather than take a chance on a democratic socialist. Bernie Sanders didn’t have any skeletons in his closet and could have run a clean campaign and taken the good fight to Trump. Their refusal to let the people pick their own candidate appears to be blowing up in their faces again, and Democrats will have no one to blame but themselves when Donald Trump is reelected which is what I think is going to happen.

This year has taken so many strange turns, I am excited and frightened simultaneously. So fasten your seat belt, things are gonna get mighty ugly in the next two weeks.

@kaliko The computer was surrendered to the FBI in December of last year, many months before Biden won the ticket. Why would you manufacture evidence before you even know who the opponent will be? The real answer is these emails are legit and are the crimes that they implicate.

@kaliko The evidence says other wise. Many of the emails have been independently verified by matching it with its recipients. The press now has the repair receipt with Hunter’s signature, which has also be verified by comparing the signature to other documents. It’s not fake.

And this is why I vote NDP

@jaythesmartone I voted NDP too lol

this is such a strange story, you have to wonder what is going to come out next,

I have a bridge in Brooklyn to sell you.
https://www.cbsnews.com/news/hunter-biden-laptop-new-york-post-story/

@solovoice The FBI confirmed to day they have the laptop, and backed the stand taken by intelligence agencies that Russia is not behind it. I don’t like these kind of scandals either, but it appears to be legit and is only getting worse.

@peter_24601 Oh, and the NY Post has the credibility of the National Enquirer.

@solovoice Standard attack for someone who cannot refute the evidence… kill the messenger. Forget the fact that the FBI just confirmed the repairman’s story. If it’s not real, why is Biden in hiding? Nice try, but this isn’t going away.

@peter_24601 A prior response seems to be missing which laid out that the FBI has not confirmed anything (because the FBI doesn’t do that), only that they have “nothing to add.” It was compete with links, but I don’t see it now. I’ve had this trouble with response not appearing on my own page. Biden is not in hiding. He’s taking a few days off to prep for the debate.

US Director of National Intelligence John Ratcliffe said during an interview that there’s no reason to believe that Hunter Biden’s laptop and the information therein contained is part of a Russian disinformation campaign.

There is also a receipt from the repair shop with Hunter’s signature, which was confirmed by comparing it to other copies of Hunter’s John Hancock.

Using the debate to avoid questions is hiding. He’s put a lid on over half of the last month… and now he’s doing it for four days less than two weeks before an election! Biden has done even less campaigning than Hillary did in 16, and remember how that turned out for her?

@solovoice I usually avoid using Fox or MSNBC as sources, as they both are at the extreme of their respective corners.

I’m curious to what Bobulinski’s evidence will uncover, and the FBI and the Senate are looking into it… so well get some answers soon.

Last night’s debate was a lot better for both candidates last night but Joe had some major gaffs. He lost Texas and Pennsylvania with that statement about getting rid of oil.

I’ll have to do a recap entry on the debate, maybe this weekend.

@peter_24601 Fox News’ bias is precisely why I used their article, since they are no friend to Biden, and yet, admitted there is no connection between Joe and his son’s dealings.

@solovoice You mean besides the eye witness testimony of Bobulinski himself, right? He claims to have attended meetings to discuss this business with Joe Biden present. I’d call that a connection, and there might be more once all the evidence is revealed. Either way, doesn’t look good for Biden…