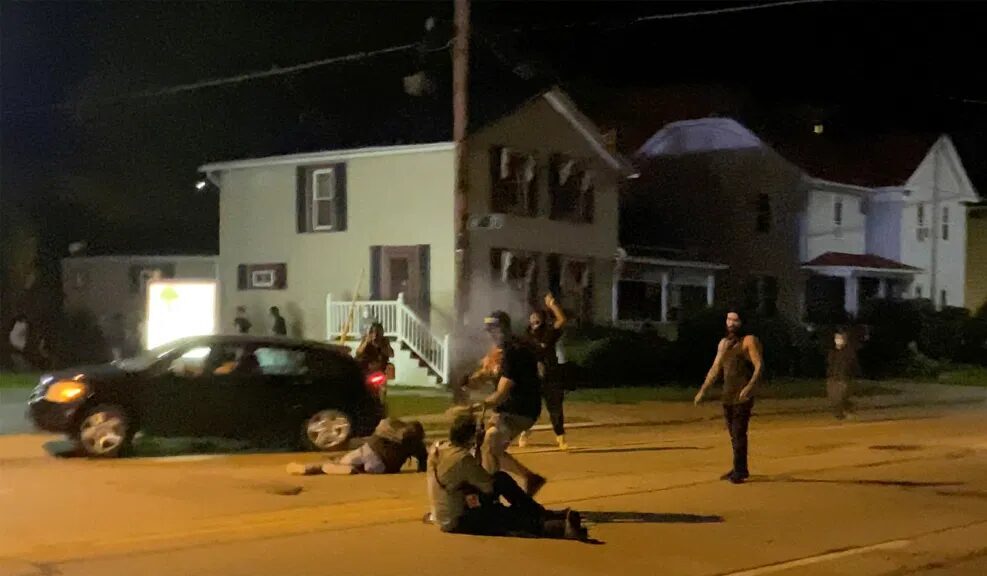 How many people have to be shot in the streets, and how many businesses have to be burned to the ground before governors and mayors realize they’ve lost control and call in the national guard? Don’t get me wrong, I’m all for peaceful protests but what’s going on in Portland, Seattle and other cities are not peaceful protests, they’re riots. Property is being destroyed, over 30 lives have been taken and nothing has changed. These ‘protests’ have been a failure because they’ve gotten out of control and the people in them never wanted to talk or compromise. They just want to burn cities to the ground.

Last night during one of these riots a young man shot three people, and two of them died. It’s slowly becoming the wild west out there. Businesses are going to starting to hire ‘militias’ to protect their stores, and these people are going to shoot rioters on site to protect their property. What happened last night was just the beginning. More stores will hire guards, and more shootings will occur until these fucking mayors and governors get their heads out of their asses and call for help from Washington in the form of the national guard. If they don’t, more people will step up to take the law into their own hands and commit more acts of self defense.

Let’s break this down:

2) The first shooting occurred when one of the ‘protesters’ tossed an object at the shooter, and then ran after the young man screaming threats to harm him. The young man responded by shooting the rioter in the head with his rifle.

3) After the man was shot, the shooter proceeded to dial 911 and call for help for the person he just shot. Then he started to walk towards the police to surrender himself. Already showing signs of remorse.

4) While walking towards police, other rioters started to chase after this kind, and kick and punch him until he fell to the ground. When on the ground a man attempted to hit him in the head with a skateboard. He used his gun to shoot that man, and then shot at another man who was walking up to him with a handgun. When I see this video, I see a kid using force to defend himself from people who mean to harm him.

5) The shooter walks up to police, but they drive right past him for two reasons. First, they didn’t see him do the act, they are unaware he’s the shooter. Second, he works for the militia that’s working with police. They asked him to step aside so they could attend to the wounded, and the boy did. Wisconsin is also an open carry state so carrying a rifle isn’t illegal.

All of these points made above are true, because we have evidence that proves it. Both shootings have been captured on video, and the footage shows a kid being attacked by rioters and both times he had to use his gun in defense of his own life. Any good lawyer is going to have no trouble arguing self defense in court. In the face of such lawlessness he has a right to use reasonable force to defend himself, and he did. We have photos and video to prove it that this was the case. I pity the DA who has to try to prove it was murder… they can’t.

I’m not the only one who shares this opinion: 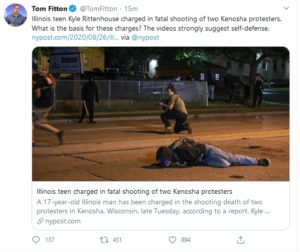 This guy is a lawyer, so I think he’s got a good idea of what he’s talking about.So make no mistake, the people are starting to fight back against these out of control riots. Yes, people have the right to ‘peacefully’ protest, but if you’re being violent, attacking people and trying to burn down buildings, then you deserve to be shot in the street like the fucking dog that you are. I have zero sympathy for the turds who died last night. They were tossing molotov cocktails, hitting people with skateboards and chasing people with handguns. So how can anyone act shocked when someone finally starts to shoot back to defend themselves and their property?

We’re just lucky it took us three months to get here. I thought the shooting was going to start a while back. This is also just the beginning. The violence will only escalate as both sides will get into an arms race. We’re going to see a lot more shootings, and a lot more people trying to shoot first so they’re not the next person bleeding to death on the ground cause ambulances won’t enter until the zone is secured. Like I said before, it’s going to turn into the wild west until someone steps up and takes control of these cities. If the governors and mayors refuse to do it, Trump should use the insurrection act, overrule these gutless politicians and send in the marines.

Until that happens, expect to see more incidents like this. I hope I’m wrong, but I doubt it.

Anyone still think defunding the police is a good idea?

Jeez, I thank God that I am Canadian. O_O

All of this is trumps fault because he is too much of a weenie to protect his so called “great america”  If I were in charge I would make it nearly impossible to have a gun and for sure no rifles or shot guns.

It’s funny how the countries that don’t have the freedom to bare arms that hardly any shooting happen and even the rioters and burning of buildings is not as horrible as in the USA.

I am so glad I am Canadian.

@jaythesmartone In order for President Trump to send in the national guard, the governor has to ask for help first, and democrat governors are refusing to do it because of petty politics. They don’t want Trump to quell the violence too soon before the election. They’d rather watch their cities burn than help a political opponent and that is disgusting, because people are dying. The only way Trump can overrule the governor is to use the insurrection act or declare martial law… both which would have the left calling him a tyrant. So the current state of these cities falls on the governors for refusing to ask for help.

sadly I agree with you,