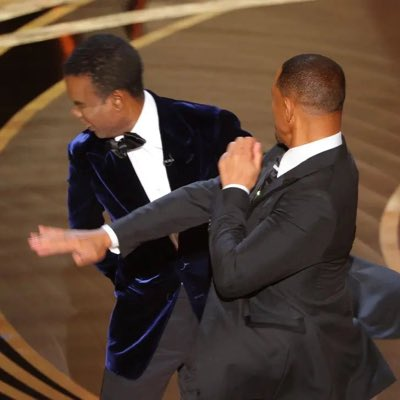 I’ll be the first to admit there is a time and place for heads to come together and to work out your differences. Air your grievances and give your adversary a chance to counter it and come to a compromise. I’ve taken this route many times, and that most of the time is the best way to avoid unnecessary conflict. I am a man of principles and ethics, but even I will admit that sometimes certain motherfuckers need be slapped upside the fucking head, especially for behavior that he knows wasn’t well received the first time around. I hate to bring in the cliche, but if you play with fire then occasionally your ass is gonna get burned. Chris Rock played with fire, and he got burned last Sunday.

Now I have the privilege of looking at this from all angles. First off, I used to do stand up. I gave it a go in late 2010 and into 2011 before calling it off and concentrating on things I was better at, like writing comic books and novels. So I know what it’s like to get up there and tell jokes and try to make people laugh.  I also know how stressing that can be, and I can only imagine how stressful it would be if someone walked up on stage and just slapped the taste out of your mouth for making a weak assed joke. Now I understand that people need thicker skins, and learn how to take a joke, but given the stress of the moment for Will, waiting for his category to come up, Rock was poking a bear and should have fucking known better. Chris is a smart man, and what he did wasn’t smart at all. He knew it too because that’s why he took the smack like a man and never responded. He also never pressed charges because it was a slap and meant to humble more than harm. Chris knew what was up and remained a professional throughout the night. He handled it way better than I would have if Will tried to slap me. I probably would have slapped Will back, or cracked another joke at him for being a Cuck. Again, Chris was better than that so kudos to him.

Now I said I see all sides and I wasn’t kidding. I’ve also been on the side of the slapper. There are three instances where I was ready and actually did lay the slap down on someone for stepping out of line. I used to date someone who had a limp. She had one because she lost some movement in her leg during surgery to remove a brain tumor. She was a survivor of cancer, and while she managed to survive it wasn’t without losing some movement. One day I was shopping with her, and someone in the grocery store actually mocked this lady for her limp. It was shocking, and disgusting to an extreme degree and I was utterly revolted. I stopped what I was doing and walked right over to that piece of trash to confront him, immediately informing him of my disgust in his joke. About halfway through his lame attempt to tell me it was just a joke, I slapped this idiot across the face. Just like Will, the point had been made with an open palm. I told him to move along and mind his own fucking business. He did so and that was it.

This is why I’m not angry at Will. Picking on Jada’s hair or lack there of was no different than picking on a cancer patient for losing his/her hair. That is a line comedians should not cross, and it appears Chris Rock did so without even knowing it. That would certainly explain his response to the slap and his refusal to press charges. He realized that he crossed a line and understood that the slap while maybe uncalled for was a natural response for some people who will stand up to what may have been unintentional bullying.

I’ll give you another example: when I was in university, there were a few of us having a debate and one person in our group complained that there were no women on our currency. The person said it was sexist and should be immediately corrected. I took great offense to this statement, and pointed out that the person was wrong, because in Canada we do have a woman on the $20 bill. I also told that person that if he was going to continue suggesting that Her Majesty, Queen Elizabeth II, was not a lady… then he and I were going to have more than words about it. I was unaware of this, but when I made that second statement, I had unconsciously started to roll up my sleeves and was getting ready to fight. That gesture was noticed by everyone in the room, apologies were made and the issue didn’t go any further.

There is also another time when smacking first and asking questions later is appropriate and that’s when a child is involved. If anyone dissed or harmed any of my children, I would not hesitate to slap that jabronie so hard their grandkids would feel it. I was at the park last summer, and my 2 year old daughter was knocked down by an older kid that was about 10. Kat’s mom tended to her almost immediately, which left me free to grab boy who committed the offense. I didn’t say anything to the young man, as I kept a hold of his collar and looked him right in the eyes for a full minute. About half way through the stare down, I growled at him. He knew I was pissed, and the only reason why I wasn’t acting out was my own personal respect for other people’s offspring. To be fair, I’m honestly surprised the boy didn’t pee himself. I did let him go but I believe the point was made; don’t mess with my kid. If an adult and not another kid had done that, I wouldn’t have hesitated to give him a face full of chicklets and knock the bastard off his feet. My response was proportional, and while I know I could have done better, that was how I responded because of the situation at hand.

What happened on Sunday was also proportional and a response to the situation at hand. Like I said before, I wished cooler heads would prevail more often than not, but every once in a while someone just needs a good slap upside the head. Part of me wishes Will had done the same thing I did with that 10 year old; just stood there on the stage with his arms folded in front of Chris and waited for an apology. That might have been scarier than the actual slap and made the same point. To be fair, slapping was much better than rolling your knuckles and doing some real damage. Will Smith didn’t want to physically harm Chris, which is why the hand was open rather than closed. I think the point was made, and I don’t think any comedian will be making fun of Jada anytime soon… especially when Willy from Philly is in the house.

So what do you guys and gals think? Was Will right to stand up for his wife, or not?  Based on your experience, how would you have reacted? Have you been there before, and what did you do? I’m curious to see where people are on the issue so let’s talk about it.

This is a hard one for me.  I love Will Smith, and I’m a sucker for a knight in shining armor.
So if I’m going to be absolutely honest, he was probably wrong to handle this the way he did.
On the other hand, however, Smith could have completely laid Rock out.  He could have punched him closed-fisted, and bloodied his nose or blackened an eye.
The fact that he slapped him, to me, shows a measure of forethought and control.  No one thinks Smith will do a drive-by at Rock’s house.
What bugs me more than anything is the bogus pearl-clutching that people are doing. “We do not condone violence,” says the Academy, which has awarded Oscars to obscenely violent movies over the years.
I’m also over people saying stuff like, “Well, so now if someone doesn’t like something a comedian has said, are they going to go up and punch them?”

How can we possibly ask this with a straight face after saying that violence in movies, television, and video games has no effect?
It boils down to hypocrisy and I’m tired of it.

I appreciate standing up for his, but this was at the Oscars where people are routinely roasted, especially those with noms and their people, I think it was a step too far in that specific situation, other places I probably would have cheered him on.