The protests are continuing. 6th night I think. There is a little hope starting to come in the wake of all of this. In many cities across the nation, there were officers that actually sympathized with the protestors. This is a HUGE step in relations between the black community and police. Another huge step would be for the police officer who killed George Floyd to actually be charged and sentenced. 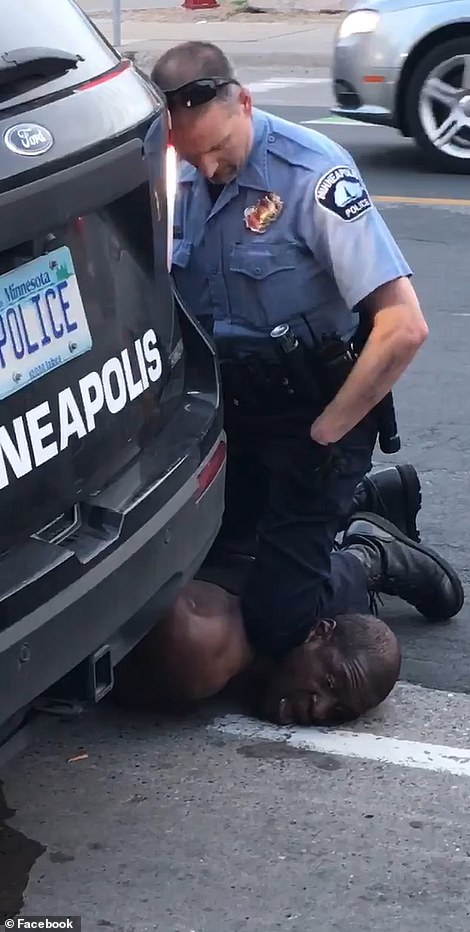 I guess I should go back and give some sort of backstory since (I’m not sure how but…) there might be people that don’t know. This is what happened:

‘George Floyd, a 46-year-old black man, died on Memorial Day (May 25, 2020) as he was arrested by four police officers over allegedly trying to buy cigarettes with a counterfeit $20 bill. He was seen in a video pleading that he couldn’t breathe as white officer Derek Chauvin pressed his knee against his neck.”

Basically, in the video you can see him kneeling on George’s neck for 8-10 seconds while the victim PLEADS for him to stop because he can’t breathe. And I will be 100% real when I say that there is NO FUCKING EXCUSE for this. NONE. Just like in Amadou’s murder when 4 police shot and killed him, using forty-one (41!!!!) bullets. He was reaching to get his wallet so they could have his identification. It’s BULLSHIT.

Even if it’s small steps, it’s a step in the right direction.

The birth of the #WalkWithUs movement: Local leaders join George Floyd protesters across US in a show of solidarity
Jessica Flores
USA TODAY

A California police chief kneeled with protesters. Law enforcement and elected officials joined protesters in Alaska. And police officers in Kansas City, Missouri, held a sign at a protest that read, “END POLICE BRUTALITY!!!”
As local leaders joined protesters across the nation to show solidarity in the wake of the death of George Floyd, an unarmed black man who died in the custody of Minneapolis police on Memorial Day, the #WalkWithUs hashtag has blossomed on social media.

“We’re looking for those in power that have the ability to make legislative and political changes to the way black and brown communities are treated in this country. We’re looking for them to exercise their power,” Marc Banks, national press secretary for the NAACP, told USA TODAY on Sunday.

‘We can’t just sit on the sidelines anymore’:Peaceful protesters lament violence at George Floyd demonstrations, but understand the rage behind it
Members of the Yees Ku Oo dance group, a multicultural group from Juneau, Alaska, performed during an “I Can’t Breathe” rally in the city. Police Chief Ed Mercer said he and other members of his department attended the rally to show solidarity with residents, saying he won’t “tolerate excessive use of force.”

In Michigan, Genesee County Sheriff Chris Swanson high-fived a woman while marching with protesters Saturday to the police department in Flint Township. 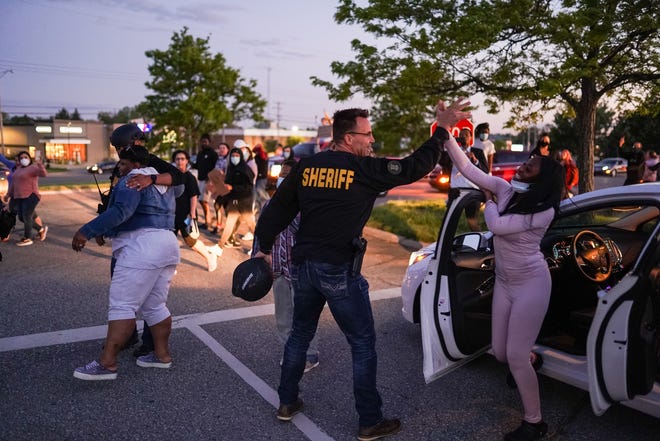 In Denver, Mayor Michael Hancock and Police Chief Paul Pazen encouraged citizens to protest despite the violence the night before when 13 protesters were arrested and three officers were injured.

“I, along with members of this department, send our condolences to the family and loved ones of George Floyd,” Pazen said. “Our heart hurts just as much as this community and the community in Minnesota.”

Thousands of people peacefully protested in four New Jersey cities this weekend. The civil rights group People’s Organization for Progress organized a protest in Newark with the help of local officials.

“People would have thought something was wrong if there was no rally,” said Newark Mayor Ras Baraka, who has marched with the group long before taking office.

A similar protest was organized with the Miami-Dade Chiefs of Police Association in Coral Gables, where officers were seen taking a knee, according to TV station WPEC. The chiefs association has committed to meet with organizers via Zoom to listen to the community’s concerns, WPEC reported.

There were other examples, too.
In Petersburg, Virginia, at least three police officers stood with protesters at Saturday gathering, ABC8 reported. “They’re talking about justice, that we totally stand for,” Petersburg Police Chief Kenneth Miller told the station. “They are tired — America is tired.”

And, in Atlanta, a video posted to Twitter showed Chief of Police Erika Shields on the streets talking to protesters, including a black woman who shared concerns for her safety.

Shields responded: “Let me tell you something, I am standing here because what I saw was my people face-to-face with this crowd and everybody’s thinking, ‘How can we use force and diffuse this’ and I’m not having it. I’m not having that,” said Shields.
“You have a right to be upset, to be scared, and to want to yell. And we’re going to have everybody doing what they need to do and we’re going to do it safely. That’s my first commitment. And I hear you,” Shields told the woman.

Once protests settle, Banks said he hopes those officials, and, some at the federal level, will work with community members and organizations to implement policy changes to address systematic racism. 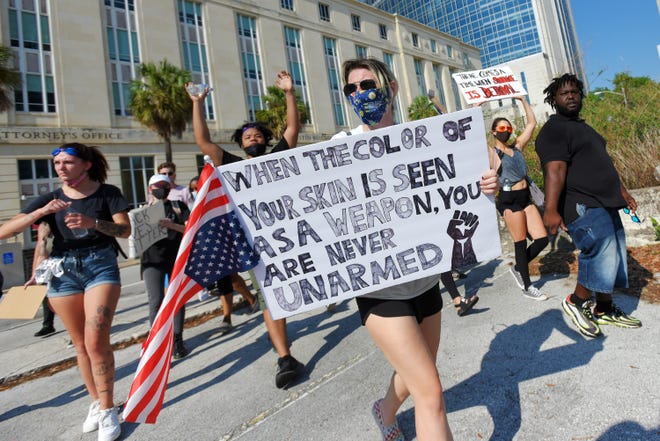