The racism in this country is growing like wildfire. Black people are tired, angry and frustrated with the lack of response to their plight. And I don’t blame them. I’m pissed as hell FOR them. And this is why:

I have privilege as a white person because I can do all of these things without thinking twice:
I can go birding (#ChristianCooper)
I can go jogging (#AmaudArbery)
I can relax in the comfort of my own home (#BothamJean and #AtatianaJefferson)
I can ask for help after being in a car crash (#JonathanFerrell and #RenishaMcBride)
I can have a cellphone (#StephonClark)
I can leave a party to get to safety (#JordanEdwards)
I can play loud music (#JordanDavis)
I can sell CDs (#AltonSterling)
I can sleep (#AiyanaJones)
I can walk from the corner store (#MikeBrown)
I can play cops and robbers (#TamirRice)
I can go to church or synagogue (#Charleston9)
I can walk home with Skittles (#TrayvonMartin)
I can hold a hair brush while leaving my own bachelor party (#SeanBell)
I can party on New Years (#OscarGrant)
I can get a normal traffic ticket (#SandraBland)
I can lawfully carry a weapon (#PhilandoCastile)
I can break down on a public road with car problems (#CoreyJones)
I can shop at Walmart (#JohnCrawford)
I can have a disabled vehicle (#TerrenceCrutcher)
I can read a book in my own car (#KeithScott)
I can be a 10yr old walking with our grandfather (#CliffordGlover)
I can decorate for a party (#ClaudeReese)
I can ask a cop a question (#RandyEvans)
I can cash a check in peace (#YvonneSmallwood)
I can take out my wallet (#AmadouDiallo)
I can run (#WalterScott)
I can breathe (#EricGarner)
I can live (#FreddieGray)
I CAN BE ARRESTED WITHOUT THE FEAR OF BEING MURDERED (#GeorgeFloyd) George Floyd is unfortunately another example of police brutality against black people. When someone can say “just another hashtag” and you know they’re talking about a black person winding up dead, it’s no longer just an isolated event. It’s happened too many times. It’s disgusting. And not only that, but once they are dead, white people will pile on the excuses trying to blame the victim somehow. THAT DOES NOT EXCUSE YOUR ACTIONS SIR. It doesn’t matter what their background is. It doesn’t matter what they’re doing. It shouldn’t matter that their skin tone is different from yours, but it does. Because of your racist ideologies, you automatically assume every black person is a threat. THEY ARE NOT. You’re just a piece of garbage hiding behind your racist views. It doesn’t help that this is fueled and encouraged by our trash “president” (if you can even call him that).

George Floyd was a person! He was a was a son, a partner to his girlfriend, brother, uncle and father! His life matters! All Black lives matter! His death has sparked outrage across not just the nation, but internationally as well. As it should. There were protests in over 100 different cities, including Minneapolis, where he was killed. Protesters are setting this nation to fire over 400+ years of being silenced. Some of the protests turned into riots when the people protesting peacefully started getting shot with rubber bullets, tear gas thrown at them and pepper sprayed. The police incited the riots. Black people are getting blamed. Let the cities burn. 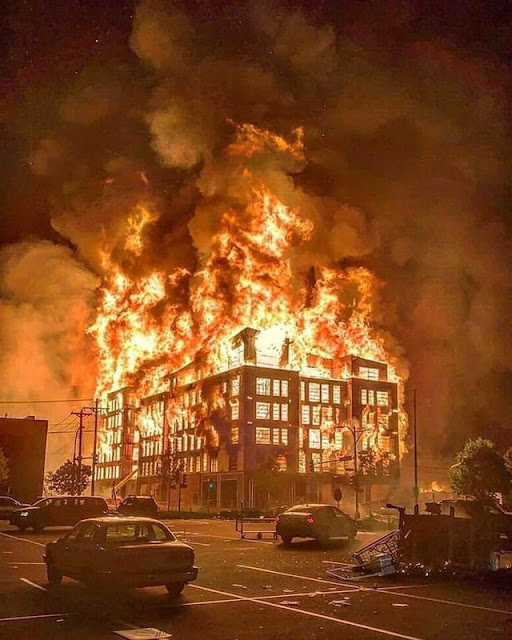 Maybe now they will listen. Black people are angry and are justified in that anger. Something in this nation has to change. We need to hold people accountable and make racism a true thing of the past. They will be heard, one way or another.