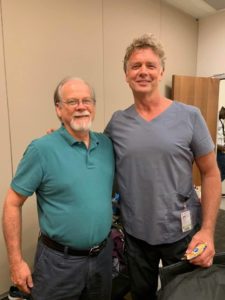 I’m with John Schneider who was Bo Duke in the Dukes of Hazard TV show. He’s playing a featured role in a schlock movie, Tulsa, that wraps shooting in Augusta this weekend. I did background, which means that you might be able to see me walking down a hallway while the action is going on in front of me. I don’t do background often. They don’t pay, though they feed you, and there is a lot waiting around. My call was for 9 pm and I didn’t actually get called to the “set” until after 1 am…or was it 2? Some folks had been there even earlier and had not yet been used. It was filmed in a training facility at the medical college. John plays a doctor. He’s a nice guy and went out of his way to accommodate others involved who are fans of his. The movie is faith-based, which means it’s probably crap. Evidently, John is a last-minute addition as he’s not listed in the cast on IMDB. As a background player, it’s considered bad taste to list the movie as a credit, so you won’t be seeing my name either. I did do that, not knowing any better, for Hollywood Dirt, my first excursion into “major motion pictures.” I have yet to see it, so I have no idea if I can be seen or not.  I walked in my front door at 3:09 this morning and had to go to work around 8. I make my own schedule, so it’s okay to be “late.”  I came home and got some much-needed rest.

Another bad deal with being a background player is that you’re placed in a room with other background players (in some movies, I hear it’s actual cages). There’s always that one person who won’t shut her mouth,  who goes on and on about what movies she’s been in and who’s she’s met, etc. I had to leave the room a couple of times just to get some peace. When you’re a bit player, you get to stay in a trailer or bus, and it’s more pleasant. Background doesn’t enhance your standing since it’s not listed. You want to get known as a actor, not background. Of course, I just dabble in this. Since I work a regular job, part-time though it is, I can’t just up and go to any movie location like some of the others do. Plus, I’ll be starting rehearsals for the musical next week and that will curtail any other acting activities. I can’t say I’m really looking forward to it.

I’ve been working furiously to find more models for my photography. I have a session set up for Monday. It’s an outdoors shoot, which is not ideal, because it limits the types of shots I can do and also…it’s hot as hell here. I may have something tomorrow, but probably not, but if it comes to pass, it will be a very interesting shoot. I’m covering an extra store for a friend and it’s out in the boonies, so I have a longer day tomorrow.

I remember Bo and boy he was cute then and he is cute now,,,but you are much more cuter…..