The commercial is in the can. It was not a long shoot. There was a bit more to it than I was previously told, though nothing big. First, I had a “b-roll” scene with another actor. This was “the friend” referred to in the script. Turns out the actor was someone I knew. We had been in a play together in Edgefield, SC. There are no lines in this “b-roll,” just two old codgers talking while a voice-over plays. After that, we shot the script. It was done as if I were answering questions in an interview. We recorded in a very upscale home owned by a local doctor. Such wealth! We did the scene several times, as we did with the b-roll. Instead of having me speak in a “commercial voice-over” tone of voice, they wanted it to be a casual interview-type, which I totally had not practiced for, but I think I adjusted for that. It would have been nice to know before hand the type of tone they wanted, but I’m not really complaining. It’s just hard to switch gears after practicing a certain way over-and-over. The whole first part took about an hour or less. Later in the afternoon, we moved to another upscale house in North Augusta, very near the house owned by one of Emily’s ex-boyfriends. This was another b-roll with me being the grandfather playing with his two granddaughters. The children were six and 10. Six looks a lot younger these days. I suspect she just turned six because of her demeanor. The 10-year-old was personable. I was afraid the six-year-old wouldn’t cooperate, because she backed away and went to her mother’s leg after being introduced to the cameraman. But she performed as instructed and I made them both laugh. The 10-year-old did cartwheels and I chased the six-year-old. There was a scene where they come to visit grandpa and I come down to meet them and give them hugs. It all took about 30 minutes. 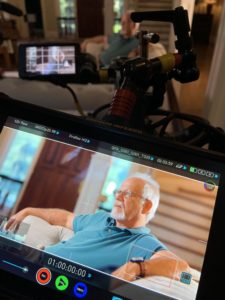 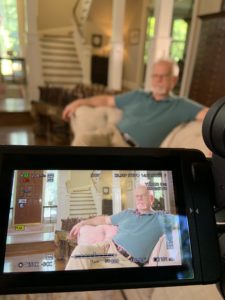 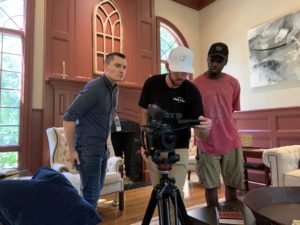 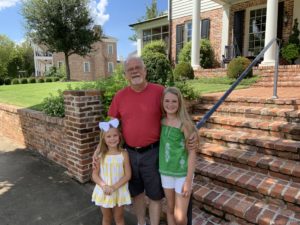 One thing I really appreciated with this company is that they paid me right after the shoot! Usually, pay doesn’t come in for a weeks after a shoot. They also told me it would be about 30 days before it was ready to be presented to their employers and after it’s approved and runs on-air, they’ll make it available for download. This is great because, not only can I share it, but I can add clips to a demo reel if I ever get around the making one.

In other news, I’m going to have a “come to Jesus” talk with the director of the show I’m in at the fort. I simply cannot travel there and rehearsal five and six nights a week. I’m either going to leave the show or he has to cut back on the number of times he needs me. I took last night off, using the commercial as an excuse — though I was well done by the time I needed to be at rehearsal. I needed the rest. Having the stress of memorizing the lines for the shoot is off, and that’s good. Still, this play is very physical with all of the dancing and I’m having a hard time with stamina and paying for the gas to travel there.

it will be really cool to see that commercial…..

Yay for getting paid!