I speed on I-20 because I need to be there by 6 and I left later than I had planned. Traffic is terrible and people are driving like idiots. Google maps gets me there with a few minutes to spare. We were told via email that there would be parking at the restaurant, but everyone is parking on the street, so I do, too. A car and the tech van are blocking the driving to the building which may have been an expensive house at one time. It does not appear to be an active restaurant though there is a fully stocked bar across from where I’m sitting.  No signs, no one to greet us when I arrived. Neither contact is present. I basically follow someone in and ask a woman coming out if this is the right place. The answer is pleasantries, so after that’s done, I ask again and get a yes. I’m sit across from a couple in a sort of sun room, but we don’t speak. Finally, a young woman, a techie with a clipboard, comes in and I check with her to check in. I had to initiate the encounter. She is pleasant enough and confirms I’m officially on board.

I finally ask the woman across from if they are from Aiken. She answers Harlem which is on the other side of Martinez, further away from Aiken than I. He doesn’t acknowledge me. I was hoping to get info about the building we’re in.

There are others in this room scattered about on sofas, window seats, and overstuffed chairs. There is some chatter, but mostly, people are quiet. The young woman techie comes through and checks names again. It is now 6:21 and I’ve still seen no one I know, nor is there any update.

The recorded sound of jazz comes from another room. The chatter has increased some though most of us are looking at our phones. The guy across from us shooting photos of his wife with his. There is a woman here who looks slightly familiar, but I’m not sure. There is a red-headed woman across from me at another group holding forth…talking about being a missionary. The techie girl comes through a different entrance and tells us where the snacks are. No one moves until I do. I go the wrong way, see tech girl who sends me in the right direction. The couple has gotten there first and the woman offers me a bottled water, which is the only choice. I pickup a couple of granola bars and ToastChee peanut butter crackers.

It is now 6:37 and they are still unloading the truck. I probably should have brought my camera.

Things will be out of sequence because I will be typing from memory. It’s 10:07 and I got home at around 10. I came out of a clear or partly cloudy sky into a deluge. The wind was bad, and something hit the car heavily while on the interstate. My allergies, which weren’t so bad in Aiken, are terrible now.

I had started taking photos with the iPhone in the house when I struck up a conversation with another background actor, the one who looked familiar. I don’t know her. She is a chatterbox and we are one-upping each other on our past movie experiences. She was background in the Clint Eastwood movie, The Mule, which everyone in Augusta seemed to be in. I didn’t respond to that call until it was too late. I had other commitments, if I remember correctly. While we were chatting, we got the call to go to the set, which was in front of an outdoor gazebo. This was the wedding scene. A young woman, playing the bride, and a man, playing her father, walk out of the gazebo between the two sections of seats as in a regular outdoor wedding. They get about three-quarters of the way up the grassy aisle when the filming cuts. We are to follow them with our faces as they go past, just like in a real wedding. There is take after take. Some are rehearsal takes, others are recorded. Some of the actors are swapped, moving those with distracting colors to the outside away from the aisle. I am in the last row, on the bride’s left, which is the first row they reach coming out of the gazebo. Several more takes. In between takes, a still photographer takes hundreds of shots of the bride and father and, also, of the filming. Two things strike me: he must be shooting at a high ISO because the lighting is not that bright, and I think about how many photos he must proof before selecting the ones to present to whomever will make the final decisions. He later tells me he’s shooting at 200 ISO which is lower than I shoot, so he must have a lens with a very wide aperture. It is a big lens and it’s an upper-end Nikon. He’s funny and friendly. In fact, the crew is very laid back when dealing with talent, but very professional. The don’t waste time. 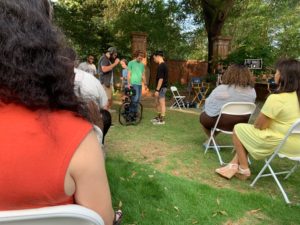 We finally break for supper. The food wasn’t that great, pepperoni lasagna and a chicken casserole, salad, roll, and some cookies.  During dinner, Chatty Cathy joins me and the couple and she dominates the conversation. I learn a lot, though, and she is an Aiken native. I give everyone at the table my card. I did learn that the restaurant and the parking lot we were told to park in is actually located below where we are. I didn’t see it from the road while following the Google directions. The building we are in is rented for weddings and the such. It has an old smell, which Chatty Cathy remarks about several times. Believe me, I know quite a bit about her history now. At some point, after the meal, I ask the couple what shoots they have been on. It’s the first for the woman, but the man was actually in and an advisor for Encounter, the SciFi movie I was in. He’s former law enforcement, which sort of explains his demeanor. He and I pair off to talk and the two women talk. She kept interrupting him and I had to keep steering the conversation back to him.

We are then called to places for the second scene, the reception. It too, is outdoors, on the patio in back of the building. We are standing, watching father and daughter dance. Did I mention it was very muggy? I am the only man with a coat on. Wouldn’t you wear a coat to a wedding? The crew mention how they like my tie, which shows colorful, tropical birds. I’m asked to stand in for the father and I tell them, “I’m ready for my close-up, Mr. DeMille” which they don’t get at all. I have to tell them the name of the movie and the star, but I might as well have been speaking in Greek.  This shoot does take nearly as long and wraps around 9:30. I give out a few more business cards, people ask me to take and be in selfies. I didn’t take any for myself. I had had fun, but I was ready to go.

That sounds fun! We had some crazy rain here last night, too.

sounds like you had fun and learned a lot…..