Several weeks ago, the children’s school sent a notice out on their app that children could wear Halloween costumes to school on October 27, 28 or October 30–depending on what days they attend in-person. My children were scheduled to attend on the 27, so I marked it in my planner…and then set about buying them their costumes. I let Bridget pick out her outfit from an expensive boutique online. Scrolling through the frippery, the numerous tulle massacres–she briefly wavered on what to be…but the sway of dressing as Elsa was too much for my 7 year old, despite her tastes normally veering towards strangeness, the odd. Another one bites the dust. (Ice?) I ordered her outfit and moved onto Rowan. Rowan decided he would like to be Anna from Frozen, since his sister was being Elsa. I asked if he might like to be Kristof instead, but no. I have no issue with Rowan exploring that side of himself–but both my ex & I were concerned about the Other Children being mean. We decided to offer other suggestions, but if his heart was set on Anna to let him be Anna. As I scrolled through the options, Rowan gasped. What could have caught his fancy? “What, buddy? What could have made you gasp like a Southern belle clutching her pearls? What has so captivated your lovely cross-dressing eyes?” He pointed at a hot dog costume. “That, mom-mom. I want to be that.” *Shrugs* Okaaaaay. 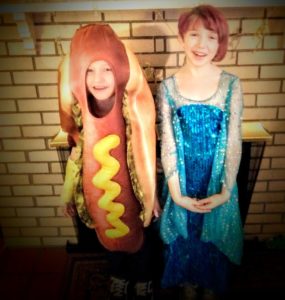 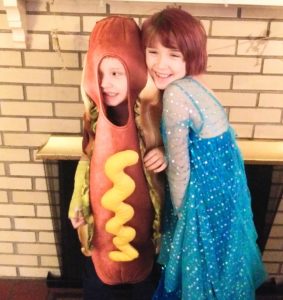 Hot Dog & Elsa…I”m sure you can figure out which is which.

So it occurs to me that I now have to maneuver…THIS…into a coat. The coat wouldn’t stay up on his shoulder unless I zipped it. Unfortunately…it left us with a slightly disturbing visual. 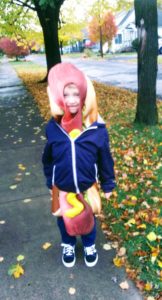 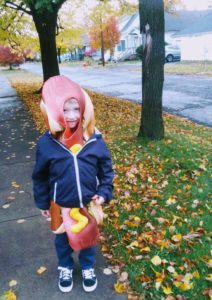 Um…I should have left the jacket unzipped. Definitely should have left the jacket unzipped. There’s something just inherently…pervy about it…but that doesn’t stop me from texting these pictures to his aunt & grandfather & numerous friends of mine. I am the reason my kid is going to get made fun of. The bus pulls up and the kids get on, I hear a couple other children laugh at the sight of Rowan’s silly costume and it makes me smile. Ah, a great first memory of Halloween at school for him–his classmates dig his Halloweiner.

I go to work and don’t think much more about it…till lunchtime, when I check my facebook. I see the school has posted that children may wear costumes on the 28, 29, 30 of October. Wait. What. It’s the 27. I panic. Did I send my kid dressed like the Oscar Meyer fucking Weiner on the wrong day? Ohnononononono, NO. Is THAT why the kids on the bus were laughing? Christ. I text my former sister in law who texts me some not very sympathetic emojis and tells me, “Welp, text me later and let me know how it goes.” Gee, thanks.

We ask the kids when they get home if other kids were dressed in costumes. We get the answer, “Meh, a few.” Bridget throws a tantrum that people laughed at Rowan’s costume but not hers. I want to say, “Did you want them to? Then you should’ve dressed up like Rowan did-as a delicious tube of pig lips & assholes with the works on top–instead of some insipid Disney princess.” Instead I just hug her. Later I sign onto the classroom app to see that Rowan won the costume contest-so the fb post must have had the wrong dates! No dipshit mother here. 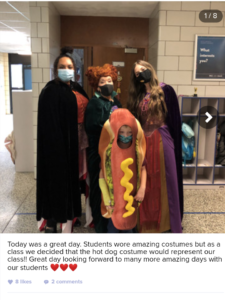 I excitedly tell my ex to look on ClassDojo because Rowan won! He studies it for a minute then says, “uh, did you see the other pictures on here? What is our kid doing? Why is he on the floor?” Wait…what? I am greeted by the following inexplicable image: 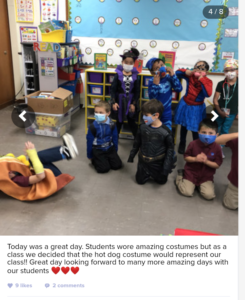 I call Rowan over and ask him what in the name of Ballpark franks he is doing on the floor. He says casually as can be, “Just pooping on my class.” I bust out laughing. “Did you tell your teacher?” “No. Just pretended in my head.” Maybe I don’t need to worry about kids being mean to him as much as I think I do.

After all…he was just poopin’…you know how he be.

@kaliko they’re so funny….don’t know where they get it from lol

I loved that text! Does this mean we’re feiends? 😉

WeinerBun THIS!  Tho I’m betting you can just use those Ballpark Frank pics to embarrass him later on down the road.   You know, for posterity…and blackmail…and stuff…

So, if another one bites the ice…does that make your girl the Ice Ice Baby…?  (I’ll see myself out before you kick my ass)

Rowan doesn’t get embarrassed, like, ever….he’s a wild man. Meanwhile, if I even look at my daughter in public, I’m embarrassing her….although that might have something to do with the fact I’m wearing nothing but a propeller hat and strategically placed teddy bears. Jk.

I treasure these moments so much. I know that I’ll only have a limited time to enjoy the babes being little.

@thecriticsdarling – Yeah well, he’s that way now…the long game is the object here.  Very easy to have the two switch their roles…boys love their mamas in the beginning but when they get teenagers, the mask of, “Yeah yeah…love ya, ma” in public comes around.  Save those pics for his teenage years.  Long game…long game.  😉

@tigerhawk  ah I see you returned for your ass kicking! Haha. Kidding. I’m on a conference call with my camera turned off and just playing on my phone. Lol.

@thecriticsdarling – Well, here I was hoping you’d forget about kicking the ass.  But…that’s just me being forgetful…LOL

Tulle massacres… you stop right there- there is no such thing! You can never have enough tulle, says this Disney Princess! And I think its a-m-a-z-i-n-g that you would support your little guy’s desire to dress up like Ana. I definitely would too, but I understand suggesting Kristof due to the other children.

Reign’s favorite color is red, but for a while he went through a pink phase and said that its like red, but lighter. I used to dress him in all kinds of colors because bright pinks/purples/neons look amazing on his darker skin tone in the summer. And I’ve never raised him to gender specific stereotypes, but never discouraged them either. I’ve always just allowed Reign to be whoever he was going to be. But during his pink phase, I did suggest that maybe he consider buying different things because his friends would be impressed. Which sounds like the wrong thing to say. It sounds like terrible parenting, to encourage your kids to conform to the peer pressures of society. At the same time, I also feel like anyone who would judge you for at least offering an alternative choice has never been severely bullied. Kids can be so cruel. Parenting makes you realize the complexities in life that way I think. Makes you realize that while sometimes living up to our ideologies can be difficult, it isn’t always safe, either.

O-M-G…. HALLOWEINER!!! This is all I needed in my life today. Thank you. And ya know if we didn’t embarrass our kids, we wouldn’t be doing it right. I’ve most definitely sent my son to school in PJs a day too early for Pajama Day. I’m absolutely that dipshit Mom. – Whatever, we participated.

Next time Reign has a rough day, I’m going to tell him to pretend he’s pooping on his class. I may do that at work today. I find your children to be very wise little humans!

I absolutely love all of this. 💗

@acaricature oh listen, I love tulle and fancy shit. I dress in 50s/vintage style dresses every day-even at home….so there was no condemnation there…just that there was tooooooonnnnnns of tulle.

Gender norms are baffling bullshit to me. Like, they are so randomly assigned. Who decided pink was for girls and not boys anyway! My boy likes his nails painted and has had colors in his hair. He likes wearing dresses and has said he wants to be a girl with long hair. I don’t worry about it….If he is trans, we love and accept him…. If he’s just exploring these parts of him, then that’s ok too. We just let him be himself. The only thing I worry about is people being unkind to him….but I also know he has a soft place to land with his family.

I know, don’t you love a 5 year old just handling his problems like that? “Just picturing pooping on these assholes, mom.”

I did the same thing with my daughter and PJ day in kindergarten! Haha! Salute from one hard working mama to another! We gotta stick together!

Bahahaha omg this is hilarious! All of it, minus the fact that other kids definitely ruin it for child expression, and as much as I know you want the world to be different, you’re not about to expose your kid to abuse to make a stand. The way you described your panic at wondering if you had the wrong date… I could see myself doing that as a mom, since I experience that level of panic with much more trivial things. I love how you describe your true thoughts and then go on to say how awesome of a mom you chose to be – this keeps things real, and it makes it clear how much you love these two. “No dipshit mother here” lol you crack me up. Dipshit mother? I think not. More like you give me hope that one can deal with anxieties, and still be a kick ass mom! 🙂

I love the kid’s costumes. Hey, I posted some stories I have written on my entries was hoping you would pop by and check them out. Anyways I know your busy no rush to stop by.

Also the power of Elsa is just too strong to resist. Even the strangest and strongest of kids get swept away. It is known.

Here you were worried about Rowan getting ridiculed for being a Hallowiener — yet he showed them all up by becoming the HalloWINNER. And then he took a victory lap by virtually defecating in the general direction of his less spooktacular classmates.

The vaguely obscene image of walking around with the tip of a giant wiener protruding from under a coat is reminiscent of the stuff I did back in high school (e.g., the time I walked around campus with a spotty banana stuffed into my pants and sticking out through my open fly).

Awesome that your kids are determined to march to beat of their own unique drums, and that they have such a supportive and open-minded mother.