As many of you know, I write letters to Bridget. I send them to an email account I created for her, along with pictures and song recommendations. When she’s 18, I’ll give her the password & then she can read all of them. This is one I wrote this morning for her.

I’m thinking about you and the panhandler…and I need to write this story down in a letter to you.

We saw him by the arterial. He’s there most days lately in the mornings, asking for money from people on their way to work. He is an old slender man, stooped under the weight of misfortune. His face is whiskered, wrinkled. His skin baked from the wind & sun. He always hold the same cardboard sign that reads “Need help, need work.” The first time you saw him on the corner, you asked me about him. I explained he was asking for people to give him money. “But why?” You asked. I explained that sometimes people don’t have a place to go or sometimes don’t have enough money for things they need…I explained that sometimes people just…struggle. I don’t tell you that there have been times where I was one of those people. I don’t tell you about sleeping in Proctor Park because I had nowhere to go. I don’t tell you that there were times when I had $7 left in my bank account and I didn’t know how I was going to eat…I don’t tell you how during those times, I would nurse a cup of coffee for hours in this little diner on Genesee St. Not because I was cold or in danger, I spent time hours there just to get a break from having no place to go & to use their bathroom. To feel like anyone else who might walk in that diner, be able to pay for a cup of coffee, sit in a booth and have a kind, elderly waitress acknowledge their existence even if it was just to ask if they would like a refill. To feel….human. I don’t tell you any of that now because those are stories for another day in a far away year, when you’re old enough to understand. All you need to know at this point is people HAVE stories and we need to be kind.

The next day, he was there again. Your brother, not understanding, laughed at the panhandler standing in the cold. You became very upset and told Rowan to stop. In a voice more wise with compassion than most adults I know, you said, “It’s not funny. Sometimes people have issues and they need us to be nice the most. Right, mom?”

When the weekend came, I had to take you & Rowan with me to the consignment store to buy winter boots and a coat, all that I could really afford. I took some money from your porcelain piggies and put it in your little star shaped purse. I told you that you and your brother could each pick out a toy at the store, if you were well behaved and listened. We came up to the corner. He wasn’t there. I could tell you were looking for him, that his absence was like a splinter in your thumb. “What’s the matter, B?” I asked you. “I wish he was there. I would have asked you to stop the car so I could give him some of the money you gave me. I mean, I know it’s not a lot—but if you have nothing, a little something can be a lot, I guess.” I silently wept in the front of the car all the way to the store…my heart just fully clenched with love for you. We bought your second-hand coat and boots and a couple shirts for you each—but I left the store feeling like I was filthy with richness.

The next week, the man was there again at his usual spot. You smiled and waved to him. He didn’t smile, but he nodded and waved back. I asked why you did that. You told me you just wanted him to know you saw him there every day. And B? You’re right in ways that you don’t even know about yet. You’re right. People just want to be seen. Not looked at. SEEN. Not a bum holding a sign—a person who made mistakes or has issues and is just trying to survive like the rest of us. Just like I was not a cheapskate holding up a booth in a diner to sip only coffee for hours & then not even leave a good tip.

With all the love I have for you in this world & the next, 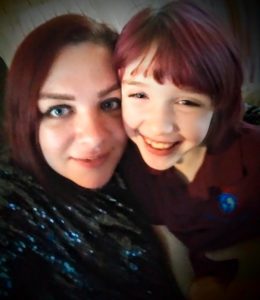 @kaliko awwww thank you! And better yet, she is kindhearted & smart as a whip. 🙂

She’s a MiniYou!  And you’re both adorable.

This is an awesome idea you have for her, like an electronic time capsule. That’s gonna be something she treasures, even if she goes rogue with the teenage righteousness.  Stevie was sorta like that. Nicole was massively like that. But they both came out great. I have no doubt yours will as well.

I’ve been there too, with literally about $10 in my account for the entire next week. I was lucky in that I had parents who fed me every Sunday.

@tigerhawk we are, aren’t we? LOL.

Bridget has acted like a teenager since she was 2…my spirit will be completely broken by the time she’s a teenager, I’m sure. The thing is she’s sassy as all fucking get out–but she’s also the most amazing, sweet, loving person I have ever met in my life. I admire her so much.

I had a period of homelessness in my early 20s when I was with Alex. We slept outside/in my car at a local park, on the floor of my friend’s apartment and then, lastly, on a filthy cot in the backroom of a drug dealer’s house. (<I was so naive at the time, I didn’t realize he was a drug dealer. I went in to use the bathroom one morning & found needles/spoons all over the toilet seat…) I didn’t (and continue to not) have a good relationship with my family…so I just handled my shit and kept on moving. I remember I got a 4.0 at college that semester even with being homeless. I can be tough when I need to be. Sometimes I forget that I have that power.

I just want my kids to know that I love them. I’m not always the most present and I struggle to manage my mental health issues sometimes…and I know some of my choices they probably won’t understand….but I try to be a good mother. Everything I do is for them.

I think I’m still naive from time to time on things I have no idea about…we all learn, some harder lessons than others.  I can never relate to a quarter of the shit you’ve had to endure…only listen and empathize.  Either way…you’ve got power, certainly.  An absolute ton of it.

Your kids know you love them.  They may not nearly always acknowledge but they more than know.  🙂

That was excellent! Out of the mouth of babes!! 😀 So great!!

@thecriticsdarling You are doing such a great job at raising her! <3

@zombieinfusedtea that is the nicest thing you could have ever said to me. Thank you.

@thecriticsdarling You are very welcome! 🙂

She has your chin and nose.  Her skin looks like soft ivory.  And her smiling eyes.  What’s not to love.  A fabulous way to give her the gift of family history which connects us all to some semblance of reality.  😎

@tracker2020 This picture doesn’t show it well, but she’s my mini-twinnie. Looks exactly like I did at that age. (My boy looks identical to his father.)

I just want Bridget to know how much I love her. I tell my kids I love them all the time and proud of them… But I’m not always good at expressing myself verbally and there is a lot of my life I have to hide from them…. Which makes me fear they’ll feel I’m distant.

It’s 7:30 am. I’m crying in my coffee now. She is the sweetest little girl in the world! You’ve done an amazing job raising her, mama. ❤

@dancingthrough you should know better than to read the letters to Bridget, they always make you cry, boo. Lol. ❤️

While Bridget’s piggybank may have been a bit short on silver, her heart has untold reserves of gold. Yes, she may sometimes bedevil you with her teen-like ‘tude, but your daughter is saintly in her compassion — extending kindness to those who need it the most yet get it the least. And when she’s older and knows more of the mother’s backstory, I’m sure that her empathetic understanding will become all the more profound.

In my current town, every major intersection has one or a couple resident cardboard sign-holders, and I’ll confess that — though I am sympathetic — I have become inured to the sight of them. But maybe that’s what hurts them the most; perhaps, more than money, they would love to merely be seen. As human beings deserving a shred of dignity.

P.S. Your second-most-recent previous entry reminded me of the old wisdom that love stories and ghost stories are, in essence, the same thing. Though I knew it was coming, it still me hard when — after making the best peace with him that you could –you looked over and saw that your passenger was no longer there.

When I was homeless with Alex, I remember I felt invisible. Besides Alex, I lacked meaningful connections… I would sneak into my parents’ house while they were working just to shower… I hid in the backroom of a drug dealer’s house while he made sales. It was a hard time to feel human, connected… Alex was all I had. I always acknowledge the homeless because of this….

I talk to Alex a lot these days as I begin to move on from him to MC. I haven’t told MC I love him yet. He hasn’t told me that he loves me yet either.  It’s weird, though, because I feel like we both know the other one feels it.  I guess I just need to feel like I’ve set things right in my head regarding Alex before telling MC that I love him. I dunno.

How was your Thanksgiving? How is everything else going?