Today, I told him about the jewelry box.

I was given the jewelry box as a Christmas present shortly after the sexual abuse began. At the time, I was 5 years old. I was struggling to survive the daily onslaught of hands and then there was this gorgeous gift. It was made of wood, stained the color of my kin, a deep mahogany…the Native American summer tan of my mother & her siblings. The lid was a stained glass garden…Lilies sprouting and jostling each other, their frosted leaves elbowing each other on their way up to the sun. It was made for a function far loftier than holding the chintz of a poor, five year old. But there it was, the landing place for: a bubblegum pink plastic charm bracelet my mother had bought for me at a car show…pilfered pieces of gum from my mother’s purse…a handkerchief with a circus imprinted on it, an elephant balancing nervously on a ball…a rock of fool’s gold I found on a walk up our road, streaks of misleading brilliance striping across the top of the rock…a paperclip I had bent to wear around my upper teeth like braces…pocket change scrounged from the crevices of the davenport, from the copper pile my father made on their dresser at the end of the day. Something almost like the cache of a crow.

The jewelry box was the most beautiful thing I owned, worth more than anything I had to put inside of it. I loved it because it was so lovely, but hated it equally as much because I knew I didn’t deserve to own something so fine. Every time I looked at it sitting on my dresser, I was run through a wringer of guilt, crank turned by my own self-loathing. It began to torture me to even look at the jewelry box, knowing it should not be mine. I was a girl with men’s dna under her nails, bruises on her knees. Something within me settled on what to do to solve the conflict before I even realized it.

One day, I took the jewelry box from my dresser, walked to the top of the stairs and threw it down the stairs as hard as I could. I watched it turn over and over, like a rock in a tumbler, till it smashed at the bottom of the stairs. A car wreck spitting out glass. Kindling wood. I grinned loosely like a champion at the top of the stairs, over the destruction, as my mom appeared at the bottom. She saw the destruction, her crazy child smiling over it like a member of the goon squad. And she fucking lost it…screaming at me to stay back from the starlight shards of glass, the slivers of wood. Screaming at me to tell her why I’d done it, why I would ruin the nicest thing I owned. I just smiled like a kid at a carnival who’d figured out how to win a rigged game.

My mom swept the beautiful shrapnel into a big, black wormhole of a garbage bag with an old, ravaged straw broom, as I watched. I didn’t even flinch later when her raw, dishwater chapped hands hit me. I stood tall in the consequences of my decision, happy I didn’t have to face the conflict over what I deserved to own anymore. It was easier to ruin the only nice thing I owned rather than face my unworthiness every time I looked at it. My mother, on the other hand, thought I was psychotic.

So today I told him about this memory, about how most days I feel like I’m still standing at the top of the stairs. Only these days, I’m somehow looking at myself, heaved down & shattered at the bottom of the stairs, too. Just a twinkling mess of sharp, dangerous edges. My mom doesn’t recognize me in pieces, and so, she just keeps sweeping, sweeping, sweeping me away to a big black hole where the sun is a dream I haven’t had & anything worth anything that I had kept inside, is now mixed in with the trash.

He tells me he understands. I don’t argue. I can already see the telltale pricks on his fingertips that tells me he is close, oh so close… 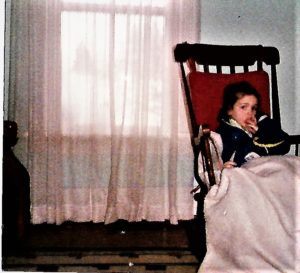 I’ve spent most of my life being told I’m unworthy. Not in the same way as you. I sinned, so I was unworthy to participate in church related stuff. I’m unworthy so I can’t see my siblings get married. I’m unworthy, so I can’t hear certain things that my parents talk about. Even unworthy to have depression. Now I tell myself I’m unworthy of love, of happiness, of a future. It’s hard to fight that.

You are worthy of good and beautiful things in your life. And you still have a lot of worth in you. You have a lot to offer the world, to people. Your mom can keep trying to sweep you away and you won’t go away. Your value will persist. The beautiful parts of you will continue to exist and shine. They can try to erase them and you should keep standing tall, smiling, giving them the finger.

@heffay give them the finger with me. 🙂

@thecriticsdarling You know I will

I can also relate to the unworthiness and guilty feeling. I feel like I did that with relationships pretty much my whole life, choosing the most broken boy, the one I knew would hurt me, the one with all of the red flags… The same boy over and over, with different faces and issues. It’s easy to say I’m healed, since I’m in a really healthy marriage, but I don’t know that without him I wouldn’t uncover this void again. I remember listening to my friends talk about failed relationships, and feeling guilty that I found the right one… I feel like I manifested some issues with Brian before, just to make others’ pain ok. I stopped doing that shit, and decided to instead try to inspire people.

I’m sorry you felt you didn’t deserve it. You definitely did and do deserve everything and more. <3

I love how you’re always willing to share your experiences and trials. I know that you are going to help so many people  because of this.

Thank you again for your support, as always. I’m working things out.

@dancingthrough Thanks, boo. You know I got you. 🙂